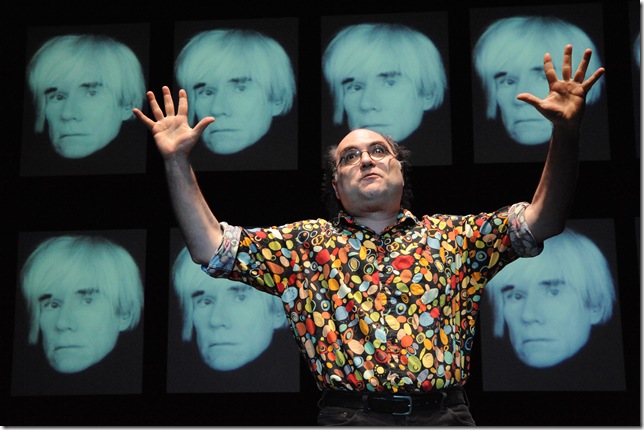 Josh Kornbluth is the original Red Diaper baby, a fact that’s given him much material for his work as a monologuist.

Raised in New York by Communist parents, Kornbluth moved to Boston in his early 20s and took a job as a copy editor for the alternative newspaper The Boston Phoenix. He briefly attended Princeton University but dropped out before graduating, and only recently completed his senior thesis, now fodder for one of his monologues, Citizen Josh.

After heading west to San Francisco, Kornbluth embarked on a new career as a monologuist, inspired by Spalding Gray, Lily Tomlin and Eric Bogosian. His monologues include: Ben Franklin Unplugged, in which he realizes that he has more in common with Franklin than his appearance; Love and Taxes, which riffs on the necessity of paying income taxes with issues in his marriage, and his latest show, Andy Warhol: Good for the Jews?, which led him to reconnect with his Judaism, and which he’ll perform Friday and Saturday at the Kravis Center’s Rinker Playhouse.

Kornbluth, 53, gave up his day job as a secretary in 1990 to work full-time on his art. He lives in Berkeley, Calif., with his wife, Sara, his 15-year old son, Guthrie, and a snake called Snakey.

He spoke with Palm Beach ArtsPaper from his home in Berkeley.

Q: As a monologuist, do you consider yourself a performance artist?

A: Yes, for me, a monologuist is a subset of performance art. Our monologues are our performances. I like the sound of “performance artist”: it makes it sound like I can dance. I don’t know if it’s true or not, but it gives off that vibe of being really cool, being in a really cool place with cool people wearing black turtlenecks, moving incredibly gracefully with toned bodies. I welcome that description.

Q: Whose work do you admire?

A: When I lived in Boston from 1982-87, I saw Spalding Gray perform his monologues at the Brattle Theatre in Harvard Square.

Spalding Gray was a catalyst for me. His performance was completely revelatory. I didn’t even know there was such a thing. I knew there was stand-up, and I knew there were plays, like Hamlet, but I didn’t know you could have a real theatrical experience with one person recounting autobiographical stories.

Artistically, his performance was amazing. It’s like seeing Michael Jordan play in his prime. I said, “Wow, I want to do what he does. I don’t think I’ll be able to, but I want to try.” It was really intense. It was a like reading a great short story. I think it is a beautiful art form.

Q: Are there any other performance artists who influence you and your work?

A: I love Brooklyn-based performance artist Danny Hoch. He incarnates a wide range of different characters from hip-hop to older Polish plumbers. You feel like you’re watching someone else each time. I also love Eric Bogosian and Lily Tomlin. I saw her show, The Search for Signs of Intelligent Life in the Universe umpteen times; it’s incredible. She’s obviously a genius.

Q: You were working as a legal secretary in San Francisco. How did you decide to become a monologuist?

A: After my journalism career at the Boston Phoenix fizzled, I was thinking about what I might do. I was in my mid-2os and remember walking up Commonwealth Avenue with a friend and he asked me, “If you could just do something that you wanted to do, your ultimate dream – what would it be?”

I said I’d like to be a stand-up comic. I shocked myself. I had no performance experience. And, yet, I had that impulse. I love the relationship of the performer/storyteller to the audience. That was the start. Several years later, I followed my former Phoenix coworkers to San Francisco and began performing.

Q: The show has a very provocative title. How did it come about?

A: It began as a commissioned work from the Contemporary Jewish Museum in San Francisco. The director, Daniel Schifrin, suggested the title for a talk and I immediately thought it was really funny.

The title has many nuances. It comes from something serious. The Jews have been in so many situations where the political winds change. It can mean having a life of relative ease and assimilation or becoming the enemy. I feel that subtext is there. But the question becomes, how do I connect Andy Warhol to that notion?

At first glance, it’s sort of ridiculous. Warhol is a Catholic from an immigrant family in working-class Pittsburgh. I knew nothing about him when I started. My first reaction when I saw Warhol’s brightly colored silk-screen prints, Ten Portraits of Jews of the 20th Century, was that I hated them and thought they had nothing to do with Jews.

To me, it was just Andy Warhol Warhol-izing certain people (including Albert Einstein, George Gershwin, Golda Meir, the Marx Brothers and Gertrude Stein) to make money.

However, one of the biggest surprises was that his images led me deeply into Judaism for the first time in my life. [Editor’s note: Kornbluth was bar-mitzvahed in Israel last summer.]

When people enter the theater, I hope the title will have a different meaning to them than when they leave the theater. As my rabbi says, this is my Midrash on these portraits.

Q: Why did Andy Warhol select 10 prominent Jews as his subject matter?

A: He did it because one of his closest friends, an art dealer, suggested that he might make a lot of money. He did a portrait of Golda Meir that was well-received in Israel. There was a commercial motivation behind his subject matter.

As I delved into more of Warhol’s life and explored his early years, I began to see the roots of where his art came from. And, I think he came to have a connection with his Jewish subjects.

Q: What did you learn?

A: Warhol’s work was profoundly spiritual. For me, it was my first involvement with any kind of Judaism – through this commercial, Catholic artist. The irony appeals to me, the fact that Andy Warhol ― who was as un-Jewish as anyone could be ― led me to find my Judaism. How weird is that?

A: Sexy. Then, thin and tall. It’s pretty obvious. These are the first three descriptions that jump out at anyone who sees me.

Q: Where do you get your inspiration?

A: From my life. Anything that interests me or that has great emotional depth or meaning that I want to talk about. I learn a lot about myself from shaping these stories for other people.

A: I improvise in front of small audiences. A sense of the piece emerges, and then I work with David Dower, my director, to shape and stage it. I develop it through improvisation, and it becomes set in my mind.

Q: What do you know now that you didn’t know 20 years ago?

A: I’m working on a new piece with my director and long-time collaborator, David Dower, the associate artistic director at Arena Stage in Berkeley, called Sea of Reeds. It’s about practicing Judaism and practicing the oboe – both of which I practice poorly.

We’ll be collaborating on it at Emerson College in Boston, where Dower is director of artistic programs at ArtsEmerson. In a few moments, a prospective violinist for the show is coming over and we’re going to rehearse. The show will open at the Arena Stage next July.

Film: Playwright August Wilson began his chronicle of the African-American experience throughout the … END_OF_DOCUMENT_TOKEN_TO_BE_REPLACED

Film: Just in time with the opening of movie theaters in Palm Beach County comes the season’s most … END_OF_DOCUMENT_TOKEN_TO_BE_REPLACED

Music: The very last concert Franz Joseph Haydn attended in his life was in March 1808, about a year … END_OF_DOCUMENT_TOKEN_TO_BE_REPLACED