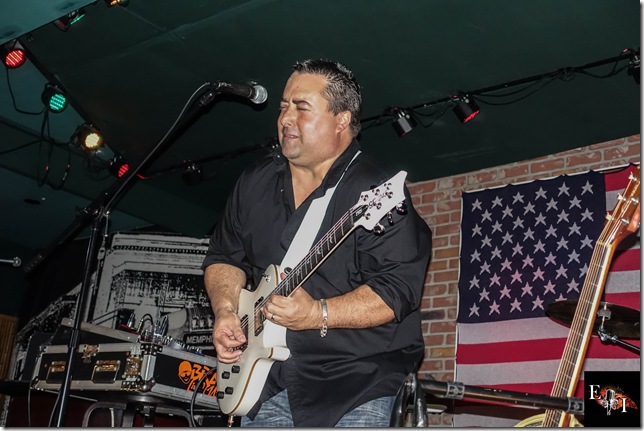 It’s only slightly more than 48 hours before the July 31 grand reopening of the Bamboo Room (www.facebook.com/TheBambooRoomLW) — the historic, if on-and-off, Lake Worth live music venue from 1999 to present-day — but general manager Ben Foster appears calm. At least on the surface.

“They just hired me,” he says, “so it’s pressure-packed, but I’ve opened a lot of venues before. We’ll start out with mostly local talent, but plan to feature jazz and blues in the early evening, partly to suit the history of the room. And we’ll book national acts too, another tradition, but that’ll take some time. I’d say by November.”

Foster helped to open Lafayette’s Music Room in Memphis (the chain nightclub now replacing the defunct local B.B. King’s in CityPlace). He was hired nearly two months ago after the Bamboo Room held a peculiar three-night trial run from July 2-4, which nonetheless persuaded financial businessmen and new investors Ryan Mueller and Blaine Minton to reopen the doors permanently rather than resell the Bamboo Room.

Since there were no promises beforehand, those three nights needed to be successful, but attendance went well beyond expectations, averaging more than 500 patrons per night. Though interim entertainment director Ryan McJury’s services weren’t extended beyond, his efforts, from social media updates to handing out fliers at area concerts, greatly aided those results. The upstairs interior was repeatedly so crowded that staff had to route customers around the side of the building, where they could either climb the back stairs to the outdoor patio or stay under the large tent erected in the parking lot. By the time fireworks went off on July 4, the decision to officially reopen had practically been made.

“I never could’ve imagined that we’d have been that busy,” says managing partner David Minton, Blaine’s father. “I knew people loved the Bamboo Room and wanted it open again, but that really showed how much.”

The official rereopening weekend of July 31 and August 1 saw patrons again party like it was 1999. Like the venue did when it first opened, there were local jazz artists (Lina & the Blue Collective), and like more recently, pop/rock acts (Dawn Patrol) played later closing sets. The most noticeable blueprint changes weren’t obvious, like later hours (closing time is now 2 a.m.) and an emphasis on popular drink specials ($3 Budweiser 16-ounce cans) that were initially frowned upon, but which became more of a staple in the past five years as the venue placed less emphasis on being an upscale blues establishment.

“Last weekend was good,” Foster says during the first week of August, “if a little slower as the nights went on. But we haven’t done a lot of marketing yet, so that’s something we need to put some money into. We also need to book that big national act to make a splash. When we do, that’s probably when we’ll start charging a cover, along with any groupings of four or five local acts together. We’ll start opening Thursday through Sunday in the middle of August, and we plan to make Sundays our regular LGBT night, with either DJs or bands.” 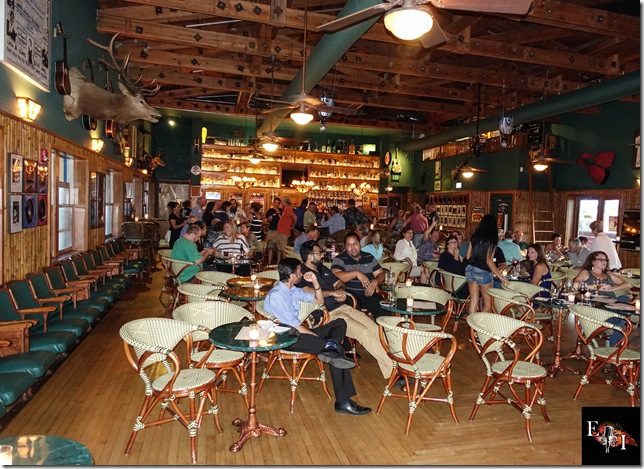 That initial, overwhelming, cover-free July 2-4 response made official owners out of Mueller and Minton, whose investment already totals close to $1 million between the purchase of the Bamboo Room, licensing, and upgrades. The two were already fans and patrons, and their agreement to keep the same name and general format helped seal the deal with previous owners Russell Hibbard and Karen McKinley.

That husband-and-wife team first opened the Bamboo Room in 1999. Hibbard’s horn training came in handy as he played the jug in one of the room’s long-standing local monthly house acts, the Banyan Street Jug Band, and his booking of national acts was a treat. The late Bo Diddley toured through, as did another since-deceased blues legend, guitarist Hubert Sumlin, who appeared as a guest with The Codetalkers, a frequent regional act co-led by singing guitarists Bobby Lee Rodgers and Col. Bruce Hampton.

Yet Hibbard’s creative booking could certainly extend beyond the blues. Another guest of the Codetalkers’ was incendiary guitarist Jimmy Herring, now with jam band faves Widespread Panic. Allman Brothers Band bassist Oteil Burbridge brought in his solo group for a memorable night; roots-rock heroes NRBQ and fusion quartet Garaj Mahal made rousing appearances, and singing pop/funk guitarist Elvin Bishop even had folks standing up and dancing at the back bar.

And all of them frequently mentioned, whether in conversation with patrons and staff or over the mic on stage, how much classier the club was than the dives and juke joints they’d become accustomed to playing. The enigmatic Hampton, best-known for founding the incomparable Georgia-based funk/fusion band Aquarium Rescue Unit (which also featured Herring and Burbridge), lovingly referred to the club as “the Boom Boom Room.” 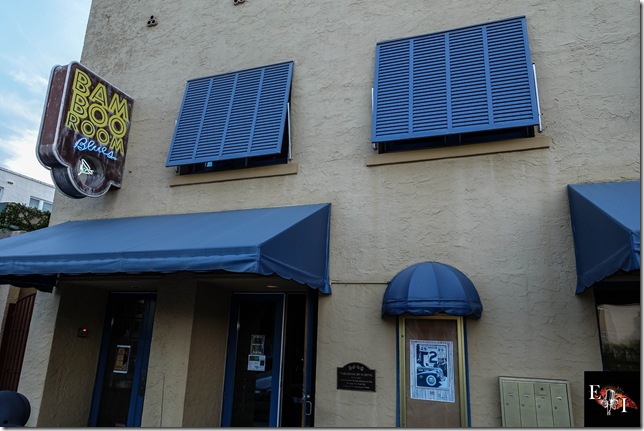 The second-story venue, located within the historic Paradise Building, hasn’t changed much visually since opening. There’s still a throwback Greyhound bus ticket window just inside the front doors downstairs, a leopard-skin front stairwell, and musical instruments and photos of the scroll of artists who’ve performed there on the walls. The floors are hard-wood; the ceiling is wooden, open, and very high, all great for acoustics.

A south-end bar and walk-in cooler offer practically any libation possible; chairs dot tables and the east side wall, and the dance floor is usually open and often occupied. Anyone who smokes can do so on the adjacent outdoor patio, which has TV screens and speakers so patrons can still see and hear the music. The stage is spacious, and the club features a house PA system, mics and stands, drum kit, amplifiers, monitors, and a Hammond organ.

“To my knowledge, it’s all the same equipment as before, including the Soundcraft mixing board,” says lead sound engineer Matt Ball.

New owners Mueller and Minton both live in Delray Beach, where Mueller’s RJM Real Estate business is based. Minton works nearby in Boca Raton as a wealth adviser and portfolio management director under the Morgan Stanley umbrella. Both now seem like kids in the candy store at the club, expressing how wowed they were by the community’s response to the temporary July reopening, and talking about a new official website (bambooroommusic.com) to augment their Facebook site. Minton even mentions possibly luring Parliament/Funkadelic leader George Clinton to the Bamboo Room; expanding the outdoor patio, and utilizing the back parking lot to include a second stage.

As opposed to most venues, local performers have been pleasantly surprised over the years to find that the Bamboo Room staff offered to assist in bringing any necessary equipment up the stairs or onto the elevator, and brought buckets of bottled waters in ice, and towels, to them on stage. For most locals, receiving that kind of respect was likely the closest they’d ever get to feeling like a national act, yet it was both memorable and priceless. Indeed, newer upscale nightclubs from Boca Raton (the Funky Biscuit) to Jupiter (Double Roads Tavern) might never have existed in their current forms without this original blueprint.

When the economy sagged in 2008, Hibbard and McKinley first closed the Bamboo Room, which stayed dark until 2011. The original, well-attended reopening party that year featured Broward County-based blues act David Shelley & Bluestone, led by the namesake singer, guitarist and percussionist who sadly died last month at age 57 after a long cancer battle. 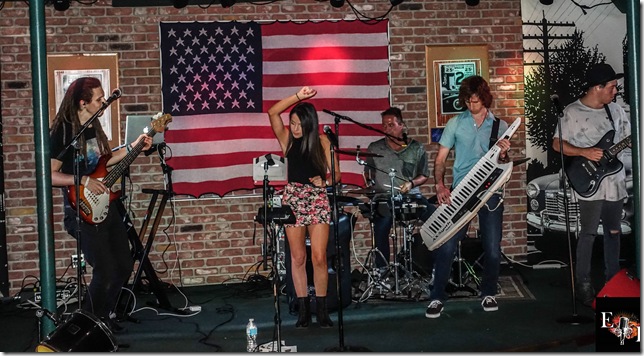 But Hibbard, also an avid auto racer, had decided to turn the booking reins over to managers Donald Becker and Craig Young. For the next three years, there was still a roots music foundation, yet one interspersed with jam bands like venerable area Grateful Dead offshoot Crazy Fingers, tribute acts to icons from The Beatles and Eagles to Elton John and U2, and ’70s rock stars like singer/guitarist Pat Travers, who released a 2013 CD/DVD set called Live at the Bamboo Room. One of its highlights, perhaps appropriately and ironically in equal measure, was a cover of composer Stan Lewis’ blues hit for Little Walter, “Boom Boom (Out Go the Lights).”

Hibbard, though, was probably better-suited to being a hands-on owner than a largely absentee one. He and McKinley turned out the lights again in 2014, leading to the sale nearly a year later this April.

Previous owners and managers had avoided trying to serve food out of the Bamboo Room’s small kitchen, stressing the venue as a listening room. The current regime hopes to split the difference through a light sandwich-based menu, and has already found ways around any culinary shortcomings.

“I’m hoping to be able to prepare and serve 15 to 20 different items by Oct. 1,” says Foster. “For now, we’ve teamed up with the Rhum Shack down the street. People are placing to-go orders; the Rhum Shack brings them over, and that’s working out very well. It helps us and helps them, since we’re each supporting another local business.”

The room’s second official weekend after reopening was likewise crowded, if not at capacity, yet still better than usual for a non-seasonal hot August night. On Saturday, August 8, area keyboardist Tom Regis’ Afro-Cuban band Afinka Funk played spirited early sets, then youthful West Palm Beach rock quintet Raggy Monster blended creative original material with surprising covers — by the likes of The Beatles, Led Zeppelin, Jefferson Airplane, and The Doors — written before they were even born.

The following Thursday, the club’s first one open, attracted a sizable, dancing crowd for Palm Beach Gardens pop/funk band The Kinected — yet another sign to expect, in addition to the purposeful jazz and blues, a variety of the unexpected.

To those who view the glass as half-full, each closing, the latest being from only July 5-30, has been of a shorter duration. “The Boom Boom Room” is now in the midst of a couple of months to work out any kinks before the area’s traditional entertainment season starts in October, and has already expanded from being open on two nights a week to four.

And South Florida in general — and Lake Worth in particular — both hope that the lights go out for only a couple to a few days per week for the foreseeable future.

Film: Playwright August Wilson began his chronicle of the African-American experience throughout the … END_OF_DOCUMENT_TOKEN_TO_BE_REPLACED

Film: Just in time with the opening of movie theaters in Palm Beach County comes the season’s most … END_OF_DOCUMENT_TOKEN_TO_BE_REPLACED

Music: The very last concert Franz Joseph Haydn attended in his life was in March 1808, about a year … END_OF_DOCUMENT_TOKEN_TO_BE_REPLACED