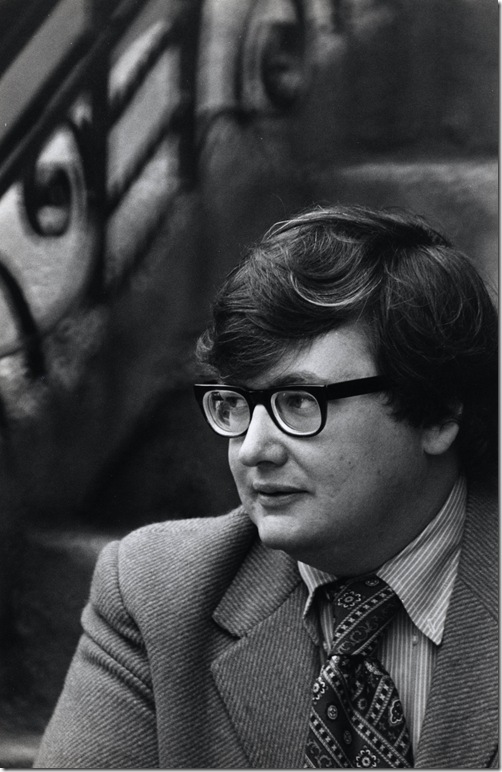 As with a lot of premature deaths, I took Roger Ebert’s continued existence for granted, and I didn’t appreciate him enough when he was alive. For many years, his critical voice was an easy one for a snobbish cinephile to dismiss, for a number of seemingly viable reasons: The former scribe of Beyond the Valley the Dolls didn’t have an appreciation for truly radical cinema. His moralistic decrial of Blue Velvet put him on the wrong side of movie history. And he become too soft in his twilight years, handing out four-star reviews as freely as a man dispensing bread crumbs to ducks in a local park.

None of this matters now, more than a year after Ebert’s noble passing from a cancer that deprived him of his voice — and it never should have mattered. Anybody who mocked Ebert, and I was one of them, suffered from a juvenile sort of sour grapes. As Life Itself, Steve James’ wistful yet witty documentary tribute, reveals, he was a brilliant mind who deserved all the accolades bestowed upon him. He was a man of courageous moral character and discerning intellect, who could wax poetically about such disparate topics as gun control, racism, religion, the vanishing of celluloid and the vanishing of life.

And he was always a better critic than he was given credit for: Every year, he would analyze a movie, shot by shot, at Colorado’s Conference on World Affairs, even doing so once after he lost his voice. This is a man who was about a lot more than his opposable thumbs, and Life Itself, which is admittedly based in part on Ebert’s memoir of the same name, is nevertheless an objectively vigorous canonization of his importance in the cranky forest of film criticism. Aided by interviews with other critics and directors, video clips from the Siskel & Ebert archive, and choice passages from print reviews, James’ doc looks at the history of popular film criticism through the prism of its most famous face, addressing some of the field’s juiciest rivalries (“F— Pauline Kael,” is the curt assessment of one of Ebert’s Chicago friends, a line that will force Andrew Sarris acolytes to suppress their knee-jerk glee).

But the most moving aspect of Life Itself is the extent to which Ebert affected those around him. I had no idea that Martin Scorsese, who executive-produced this film, was so indebted to Ebert: The critic’s perceptive celebration of Scorsese’s rough-around-the-edges debut, Who’s That Knocking at My Door?, single-handedly forecast his future greatness. Later, Scorsese gives Ebert credit for lifting him out of a suicidal mire. And when Ebert panned The Color of Money, Scorsese recalls that he was crestfallen, but that the critic’s constructive words led him to push harder next time. Can a critic possibly receive a better compliment?

And these stories continue, from Werner Herzog to Ramin Bahrani to lesser-known, emerging filmmakers who benefited from Ebert’s attention, generosity and gifts both literal and figurative. If you don’t well up at this, James gives us plenty more opportunities for waterworks: the death of Gene Siskel, Ebert’s best frenemy; and, of course, the writer’s declining health, as witnessed by his friends and family.

It’s these scenes in Life Itself that are most difficult to watch. James had complete access to Ebert during his final weeks, filming him daily in his hospital room during a lengthy recovery from a hairline fracture. What remains of the great writer’s jaw hangs limp and useless in one painful close-up after another, and we watch him being fed through a suction tube and eventually climbing the steps toward his apartment, which comes off as a Herculean achievement. He would only last at home a couple of days before returning to the hospital for the last time.

Anybody who’s lost a loved one to disease will relate to these scenes, which are this movie’s main raison d’etre — beyond its overdue championing of Ebert’s critical reputation. Life Itself is a guidebook for coping, and for accepting the inevitable. Ebert opens up eloquently about his impending death, which he does not fear. He never loses his wit. And even though he couldn’t talk, he could smile; his face seems positively frozen in a state of incongruous contentment. Ebert left the world the way he lived in it: inspiring, and on his own terms.

Film: Playwright August Wilson began his chronicle of the African-American experience throughout the … END_OF_DOCUMENT_TOKEN_TO_BE_REPLACED

Film: Just in time with the opening of movie theaters in Palm Beach County comes the season’s most … END_OF_DOCUMENT_TOKEN_TO_BE_REPLACED

Music: The very last concert Franz Joseph Haydn attended in his life was in March 1808, about a year … END_OF_DOCUMENT_TOKEN_TO_BE_REPLACED