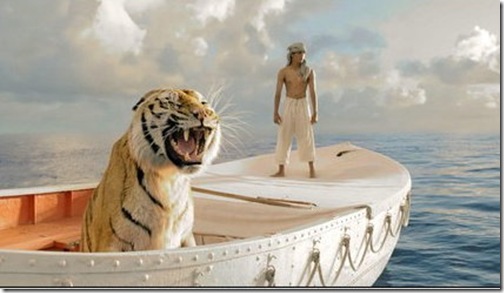 I could have watched the opening montage of Life of Pi for a full three hours and walked away satisfied. Not just satisfied but cleansed, reinvigorated and positively transported, to a paradisical time and place that probably never existed.

Shot in 3-D, the movie opens with images of a tropical zoo, where verdant foliage flanks scores of exotic animals as they traipse across the frame. Dolphins navigate pools of water, hummingbirds flit by in the trees; lemurs and boars share lush real estate with elephants, flamingos and hippos, all moving to tranquil world music.

Knowing that Life of Pi was not a nature film, it was inevitable that some kind of narrative would have to emerge from this story-less magic — a tall order to follow indeed. The zoo, it turns out, was once the property of the title character, Pi (non-actor Suraj Sharma), or rather his parents, who cared for the animals in the territory of Pondicherry, known as the “French Riviera of India.”

As a boy, Pi grew up in the region as a religious pluralist, taking inspiration from Hinduism, Christianity, Islam and even Judaism, much to the consternation of his parents, who argued that if he believed in everything, he really believed in nothing. The first act of the film traces some of Pi’s formative experiences with faith, love and literature, but most of the picture takes place on and after a fateful sea voyage from India to Canada, where the family is in the process of relocating their entire zoo due to political strife on their homeland. The great ship capsizes in a storm, stranding Pi on a dinghy for an astonishing 227 days –- sharing space with a tiger and other surviving animals.

It’s not a spoiler to reveal that Pi survives the harrowing ordeal; the film (and its trailer) gives as much away with its unfortunate flashback structure. Pi, fully grown and living in Canada at the film’s beginning, shares his life story with a floundering writer seeking inspiration for a novel (Rafe Spall). An acquaintance of the writer’s told him that listening to Pi’s tale will make him believe in God — an intriguing premise for any skeptical scribbler — and director Ang Lee occasionally revisits their present-day conversation. This sort of structure doesn’t exist in the source material, Yann Martel’s best-selling fantasy novel of the same name, and knowing about Pi’s triumphant survival goes a long way to killing the suspense of the adventure to make a theological point.

That said, Life if Pi is a ravishing visual experience, filled with majestic backdrops, intoxicating editing transitions and inventive, breathtaking set pieces that make it an unimpeachable landmark in the evolution of 3-D motion-picture artistry. The shipwreck sequence comes across as Titanic-meets-Noah’s Ark, a Dramamine-inducing rush of nauseous exhilaration that is both frightening and — with Pi wading across the water-filled ship alongside zebras and hyenas — absurd.

By the next day, as Pi has cheated death on a small lifeboat, the few animals that managed to join him have surrendered to the Darwinian food chain, leaving only one beast of burden: a 450-pound Bengal tiger named Richard Parker (whose name has its own back story) that will become this young castaway’s dangerous version of a Wilson volleyball for the next hour-plus of the film.

The CGI is beyond impressive, with the beautiful and treacherous seascape and its unpredictable denizens acting as another character in the film. This is an element of Ang Lee’s vision we’ve never seen before, save perhaps for the flying swordplay of Crouching Tiger, Hidden Dragon; he remains a chameleonic director who resists auteurist classification.

The character of Pi seems to be a mystical personification of numerous worlds, cultures and faiths whose very name – shortened from “Piscine” – suggests limitlessness, infinity. He’s less a flesh-and-blood person than a symbol of endless possibility, and so we believe his farfetched survival story, even when confronted, in the film’s third act, with a more convincing alternative to his narrative. The movie seems to be saying that accepting (and preferring) the implausible is necessary for faith, but no matter what you believe in, Life of Pi is a testament to the boundary-crossing necessity of storytelling.

Film: Playwright August Wilson began his chronicle of the African-American experience throughout the … END_OF_DOCUMENT_TOKEN_TO_BE_REPLACED

Film: Just in time with the opening of movie theaters in Palm Beach County comes the season’s most … END_OF_DOCUMENT_TOKEN_TO_BE_REPLACED

Music: The very last concert Franz Joseph Haydn attended in his life was in March 1808, about a year … END_OF_DOCUMENT_TOKEN_TO_BE_REPLACED