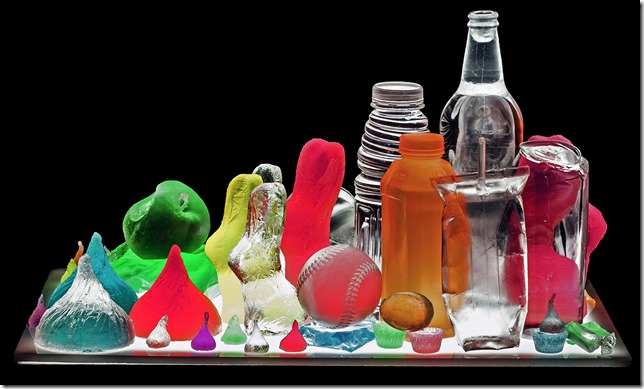 Everything about Lit — well, lights up.

From playful neon lights, big bold works with bright bold words, to art created on Plexiglas and illuminated with LED lights, art made from packaging tape on acrylic panels, and art with motion detectors that changes colors when a viewer steps into view.

The exhibition showcasing the unique art and light works of 16 contemporary and international artists is on display at the Cornell Museum in Old School Square through Aug. 28.

London-born Chris Bracey, whose father was a neon signmaker, incorporates salvaged lights and signs and other objects into his work, proclaiming Sail Away With Me, Honey in one piece, and The Artificial Fascinates Me The Bright & The Shiny, an Andy Warhol quote, in another. 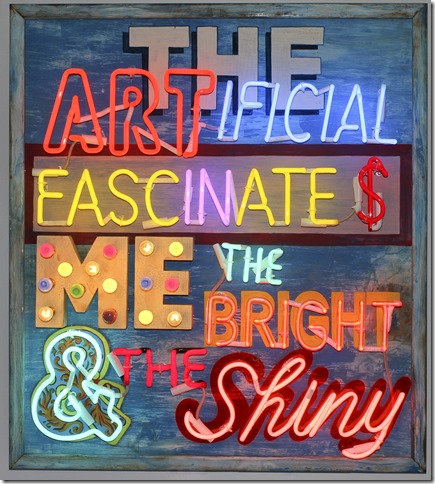 The neon letters blaze bright against a handpainted wooden background, each word a distinct color and style of lettering.

Sam Tufnell taps into today’s pop culture in his works made of resin.

“His work is very Pop-art inspired. He has sculptures with very recognizable images; he has used the Pop art in our popular culture of today and created art around it,” says curator Melanie Johanson.

There are gnomes and Darth Vader masks, children’s lettered blocks, even art made up from trash from around a neighborhood block.

“His works are so much fun. They’re different,” Johanson says. “They are lit from with underneath. The light shines through each piece. We have cool pictures of people looking at those pieces and light shining on their faces.” 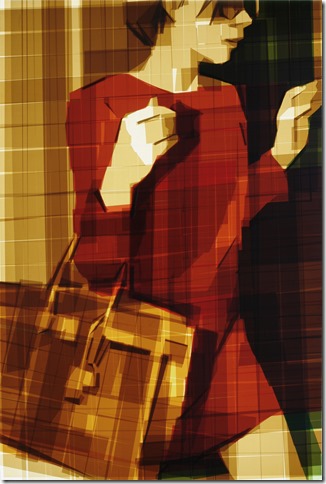 The Lady With the Bag, by Mark Khaisman.

Local artists contributing to Lit include Vincent J. Cacace of Delray Beach and Carol Prusa, an associate professor of art at Florida Atlantic University in Boca Raton. In Cacace’s oil paintings, the light of the moon and the sun serenade the ocean and majestic palms.

Prusa’s art pieces are created with silverpoint, graphite, and fiber optics. Each piece is shaped as a sphere or hemisphere with plenty of room for fiber optics or video inside.

“Each piece is a world of sorts,” Prusa says. “They were selected by Melanie because they all light up in some way either through video or fiber optics.

“The pieces themselves are actually made out of Plexiglas, then I draw on them in silverpoint, a single silver wire, and I add graphite and acrylic white paint.” 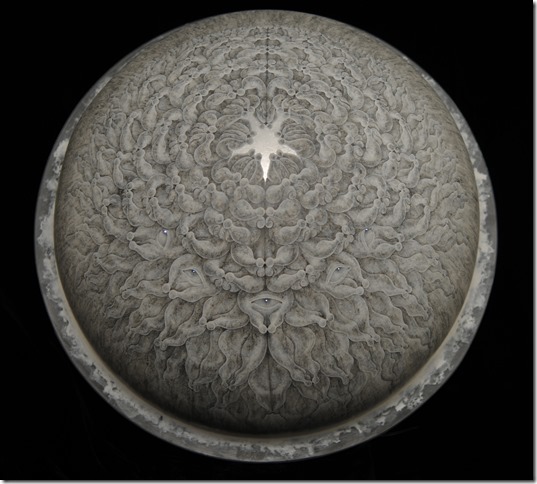 Prusa says she was inspired by theories of contemporary physics such as string theory. And in Hyperstrings, the video has what looks like vibrating strings.

Each piece took Prusa between 100 to 500 hours to create.

Large-scale, mixed-media pieces by Miami’s Frank Hyder pulse with light with subjects ranging from fish to caviar to luminary figures.

“Those are really big and tall and the light can pulsate inside of them,” Johanson says. “The designs on the outside are really beautiful.”

Lit runs through Aug. 28 at the Cornell Museum in Delray Beach. Museum hours are Tuesday through Sunday from 10 a.m. to 4:30 pm. Admission is a suggested $5 donation. The museum is located on the campus of Old School Square, 51 N. Swinton Ave., in downtown Delray Beach. For more information, call 561-243-7922. 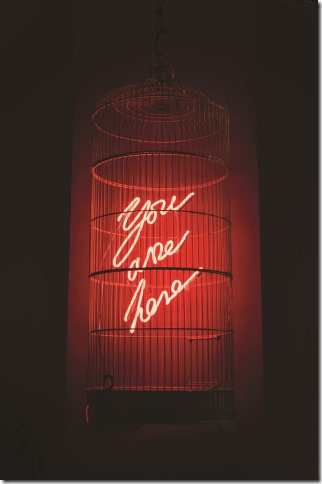 You Are Here, by Olivia Steele.

Film: Playwright August Wilson began his chronicle of the African-American experience throughout the … END_OF_DOCUMENT_TOKEN_TO_BE_REPLACED

Film: Just in time with the opening of movie theaters in Palm Beach County comes the season’s most … END_OF_DOCUMENT_TOKEN_TO_BE_REPLACED

Music: The very last concert Franz Joseph Haydn attended in his life was in March 1808, about a year … END_OF_DOCUMENT_TOKEN_TO_BE_REPLACED