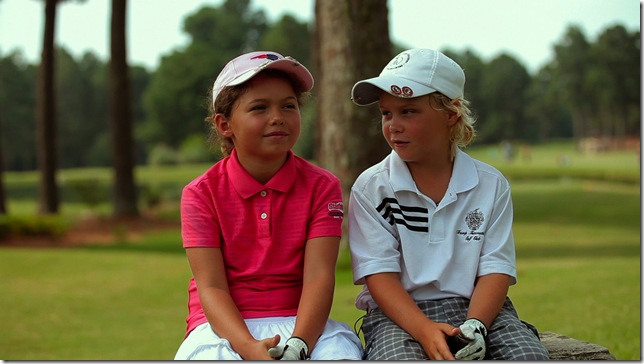 Although Palm Beach County has plenty of celebrities, it is rare for a movie to feature prominently two local residents.

But that is the case with The Short Game, a new documentary opening this weekend at the Muvico Parisian complex, about 7-year-old golfers from 54 countries around the globe competing in the World Championship of Junior Golf at North Carolina’s manicured Pinehurst Country Club

Meet Allan Kournikova of Palm Beach and Alexa Pano of Lake Worth, both seasoned golfers now at the ripe old age of 8.

Pano is neither tall nor muscular, but she can sure whack a golf ball. The secret, she says is “working on your fundamentals and that’s really it. If you follow the fundamentals, you can hit it as far as you want to. You don’t have to be 6 feet high and weigh 200 pounds to hit the ball hard.”

Kournikova — yes, his older sister is tennis star Anna Kournikova — rarely agrees with Pano, but he does about how to succeed at the maddening game of golf. “It’s more about technique and how much effort you put into the game,” he explains.

Asked what he likes about golf and why he took up the sport at 5, Allan says, “You get to travel, you’re happy and you get to make a challenge with yourself. Can you get the ball onto the green and spin it back? Can you get it out of the woods and within five feet of the pin?” And it did not hurt that he watched as his sister garnered attention and fame winning matches in far off lands.

Allan considers putting “the funnest part” of the game. The key to accurate putting? “Sometimes in my head, and a little bit out loud, I talk to the golf ball,” he says. “I do.”

Alexa giggles at the very idea, saying, “I just think and then I just putt it.” She pauses, and adds, “I do not talk to my golf ball. I yell at my golf ball. I can’t help myself, but I hope that it helps.”

Golf is obviously a skill sport, but a little luck doesn’t hurt either. Alexa is a big believer in superstitions and good luck charms. “At every tournament, I must wear a Patriots visor and use a Patriots ball marker,” she says firmly. “Before this year’s world championship in North Carolina, I lost my Patriots marker. My dad called my aunt, who lives in Boston and she sent overnight four ball markers that were there the next day.”

“For me, it really doesn’t matter what kind of hat I have on,” Allan scoffs. “It’s the way you play. I do admit that this year (Alexa’s) grandma did help me, because she gave my Mom a pack of Mentos to hold onto.”

Pinehurst is the big event for these youngsters, but during the summer and whenever their school schedule allows it, they are usually in a golf tournament somewhere. “There’s a tournament every week,” says Allan. “It’s like the PGA tour. You play a tournament, you have a couple of days to practice, you play another tournament. I’ve played in Scotland, England, Russia and Germany.”

It is a grueling schedule, but both Alexa and Allan insist that it does not get in the way of their childhood. “No, not at all,” says Alexa. “This is what we want to be doing. If we want to just play with someone, we can always tell our parents, ‘We’re going to take a day off.’ ”

Both kids are comfortable dealing with the media, poised and articulate, though a little fidgety, in an interview. They say they loved making The Short Game, even with a camera in their faces wherever they went. “That was not disturbing to me,” says Alexa. “I played better with them. I’ve never met a camera I do not like.”

“A camera’s a camera,” chimes in Allan. “They made me concentrate more, so I did better.”

Asked if they felt The Short Game had a wider message for theatergoers beyond the inside look at children’s division golf, of course they had an answer. “Yes, especially if they have children, to motivate them to do the best they can in whatever they do,” says Allan.

Adds Alexa, “I made this movie because when you look at the LPGA (Ladies Professional Golf Association), all you see are Asians and European players. I’m hoping from this movie that more American girls will get involved.”

And what kind of review would you give The Short Game, Allan? “I thought it was one of the best documentaries that I’ve seen,” he says. “Of course, I got to look at myself.”

Film: Playwright August Wilson began his chronicle of the African-American experience throughout the … END_OF_DOCUMENT_TOKEN_TO_BE_REPLACED

Film: Just in time with the opening of movie theaters in Palm Beach County comes the season’s most … END_OF_DOCUMENT_TOKEN_TO_BE_REPLACED

Music: The very last concert Franz Joseph Haydn attended in his life was in March 1808, about a year … END_OF_DOCUMENT_TOKEN_TO_BE_REPLACED