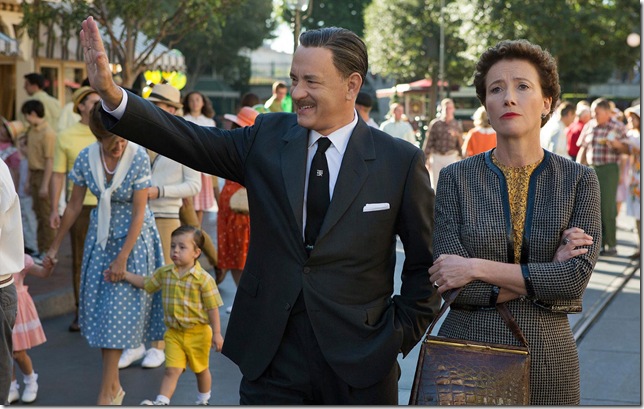 There is exactly one scene in the two hours of Saving Mr. Banks that feels real, organic and truthful.

It happens about two-thirds of the way into the picture, when P.L. Travers (Emma Thompson), the irascible creator of the Mary Poppins books, taps her feet to the very first rehearsal of Let’s Go Fly a Kite by Richard and Robert Sherman (Jason Schwartzman and B.J. Novak), in a pre-production room at Disney. This foot-tapping eventually leads to full-on dancing, and it’s a glorious moment – a testament to the visceral power of song – that conjures the best of the frothy studio musicals of yore, of which Mary Poppins was a significant entry.

And in Saving Mr. Banks, the moment is all the more liberating because, for every second of the movie up until this point, Mrs. Travers had adopted the charmless manner of a scowling schoolmarm, and was about as pleasant company as a horned toad.

The film is set in 1961, and captures a few weeks of pre-production on the Mary Poppins movie adaptation. A financially strapped Travers has finally relented to Walt Disney’s (Tom Hanks) 20-year quest to adapt her character into a splashy musical, albeit with several strings attached, including final script approval. On the hallowed Disney lot, the word “No!” follows Travers’ every exhale, much to the chagrin of the movie’s composers and exasperated screenwriter (Bradley Whitford).

When her personal chauffer (Paul Giamatti, performing another yeoman’s duty) suggests that the air in Hollywood smells like jasmine, she instead smells “chlorine and sweat.” Passing the city’s rolling hills, the chauffer remarks, “Beautiful, isn’t it?” “If you like that sort of thing,” she bitterly responds.

And this is how it goes, tirelessly and ad nauseam. Nobody is this consistently obnoxious, but in the simpleminded Hollywood fantasy of Saving Mr. Banks, somebody has to be one thing and one thing only before they can be reformed into another thing. We aren’t complex people with conflicting emotions; we are 100 percent straitlaced stuck-ups until the perfect person comes along to change that. And in this movie, even more ludicrously, it’s that anti-Semite and racist, Walt Disney, who is her spiritual savior (Saving Mr. Banks is a Disney movie, of course, so the worst sin Walt commits onscreen is smoking).

Saving Mr. Banks spends roughly half its film in Mary Poppins script meetings and the other half in the artificially sun-baked flashbacks of Travers’ childhood, scenes that are meant to inform her later work and justify her development, neuroses and raison d’etre. In short, the film says, she has daddy issues, with Colin Farrell taking the thankless role of her drunken fool of a father and Ruth Wilson the more-thankless job of her mother, who spends most of the picture staring grimly at her husband.

While it’s no doubt true that the writer’s father cast a large shadow over her work — “Travers” being a pen name taken from her dad — in this case, her creativity and talent as well as her exacting nature are reduced entirely to her relationship with Pop. This easily comprehensible causality is, like most of this movie, insultingly shallow. Saving Mr. Banks is basic, it’s dusty, it’s Freud.

Then there are the movie’s more quotidian examples of cut-rate tackiness: The stagy dialogue, with its moments of transparent exposition; the lazy habit of forcing characters to talk to themselves rather than convey information through gesture and emotion; and the stupidly bouncy score, which frequently feigns launching into Peter Gabriel’s Solsbury Hill before settling on Desperate Housewives-style pabulum. We never forget we’re watching a John Lee Hancock-directed film; this is the middlebrow voice behind The Blind Side and The Alamo, after all.

Perhaps the greatest irony is that if anything this movie has to say about the real P.L. Travers is true, she would have hated a bauble as artless and sentimental as Saving Mr. Banks. For a writer who peddled imagination so well, this film has none.

Film: Just in time with the opening of movie theaters in Palm Beach County comes the season’s most … END_OF_DOCUMENT_TOKEN_TO_BE_REPLACED

Music: The very last concert Franz Joseph Haydn attended in his life was in March 1808, about a year … END_OF_DOCUMENT_TOKEN_TO_BE_REPLACED