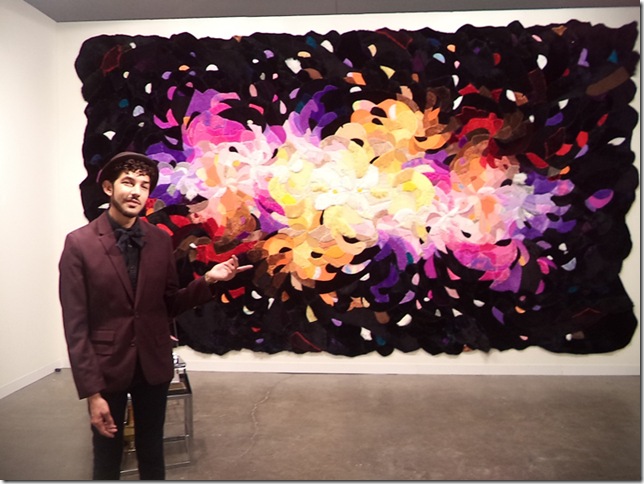 When the Art Basel Miami Beach week ended Dec. 8, more than 75,000 people had visited the show in the Miami Beach Convention Center, and many of those 75,000 had visited the five main fairs that have sprung up around it: Art Miami, Design Miami, NADA, Pulse and Untitled.

There was plenty of star power, too. At Art Miami’s opening Dec. 3, a horde of no less than 13,500 VIP guests crowded the aisles and included celebrities such as Cindy Crawford.

To grasp the scope of the art scene that week, consider this: there were 12 other fairs in huge tents and hotels, six private collection spaces, 11 museums, eight art spaces, public art and 19 galleries. Since the inception of Art Basel Miami Beach in 2002, the first week in December has become the largest art show in America, attracting people from all over the world.

This year, the Art Basel fair contained more than $2 billion worth of art, with nearly $27 million selling in the first two hours of the show. People are collecting at an astounding rate and the passion for art is stronger than ever before as new buyers come down with art addiction every day.

“At Art Basel in Miami Beach we have more serious first-time buyers than at any other fair in the world,” said New York galley owner David Nolan. 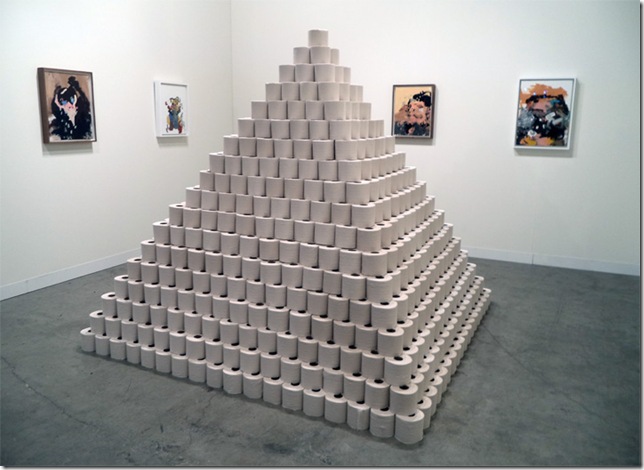 Museum curators were also there in force purchasing works for their collections.

“This year has been marked for us by the largest number of museum groups and institutional contacts, and a new generation of collectors becoming very active,” said Lucy Mitchell-Innes, of New York’s Mitchell-Innes & Nash.

A showstopper, laugh generator and photo op were the 6-foot-tall toilet-paper pyramid and blind paintings by Martin Creed in the Gavin Brown Enterprise gallery booth. Gallery representative Laura Mitterrand explained that Creed paints the portraits without looking at the canvas and does them in several sittings. Another shocker in this booth was a large, X-rated photograph of Katie Couric exposing her unclad genitalia beneath her news desk.

Established galleries showed well-known artists, as well as mid-career artists, but undoubtedly my favorite area within Art Basel is Nova, which featured 34 young galleries and recently completed art and installations where one can see what artists are working on and currently thinking about. The work is fresh, original and often outrageous. 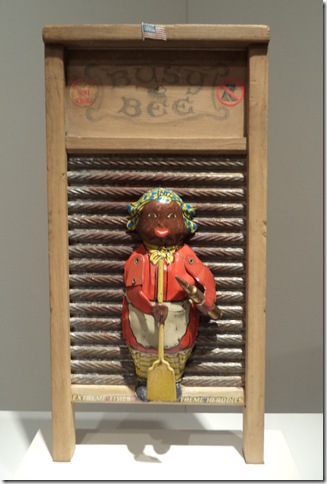 I was attracted to a 10-foot-by-18-foot wall hanging titled Milky Way in the Spinello Gallery booth. The colorful piece had a plush texture, and upon closer inspection, I asked the Miami gallery owner Anthony Spinello if it was created from stuffed animals.

“As a matter of fact it is,” he replied. “Actually, it is made from skins of teddy bears.” Artist Agustina Woodgate collects the bears from thrift shops and garage sales, removes that stuffing and then, like a collage artist, separates them into colors and creates the patterned pieces, Spinello said. 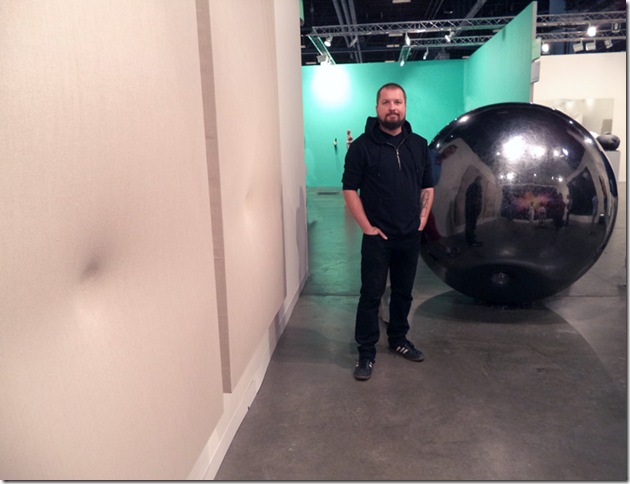 Spinello also showed three pieces by an artist well-known in Palm Beach County, Sinisa Kukec, a Croatian artist whose recent work deals with gravity. The shape of a 60-inch-tall sphere constructed of Styrofoam, concrete and graphite was echoed in two tall, minimalistic canvases.

Down the aisle, in the Revolver Galeria’s ABMB booth, artist José Carlos Martinat’s installation consisted of two fake palms on which small printers were mounted. They were spewing out pieces of paper containing Google searches for the United States, Cuba and Puerto Rico. Curious onlookers picked up the notes; some were in English and some in Spanish.

Hidden down an innocuous hallway was a fascinating installation by Naomi Fisher and Jim Drain, two young Miami artists who work out of an alternative gallery space called Bas Fisher Invitational (BFI). In the entrance of Paradise: Working Title, was a sculpture of gray wood and brightly colored disabled-grab bars across from a wall of camouflage netting whose foundation was made from stacked walkers that were bound together. Rounding the wall, there was a full bar serving liquor and a Jamaican man hacking the top off of coconuts, placing a straw in them, slapping on a label and serving the coconuts to incredulous onlookers. 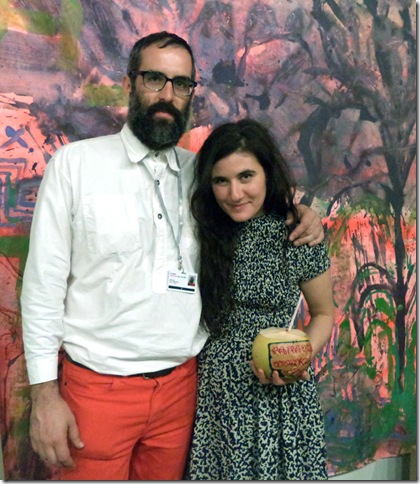 Certainly the grab bars and walkers must be a comment on South Florida’s aged population, but the coconuts? The diverse mix of cultures in the area, perhaps. Fisher showed 30-inch-by-40-inch photographs printed on silk of a garden scene, and also of a snake displayed on the floor with live, potted orchids sitting on top.

Seeing fresh, new artwork is one of the greatest things about Art Basel and the other fairs, but another is the opportunity to see work by famous artists that has been hidden from view in private collections. 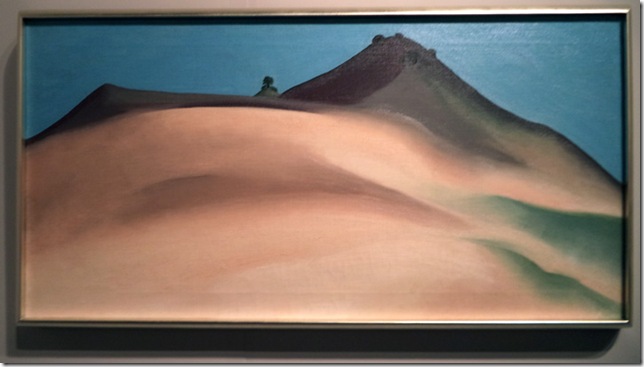 Such was the case as I glimpsed from afar a Western landscape and noticed a familiar painting style. “Is that a Georgia O’Keeffe?” I wondered. Sure enough, it was; titled Toward Abiquiu, New Mexico (1930), it was on view in the Hirscl and Adler Modern gallery.

Much of the fun of these shows is discovering the art, pondering the mysteries and solving the puzzles. These are some of the reasons why more people are becoming addicted to art and brave the crowds at so many art fairs.

Film: Playwright August Wilson began his chronicle of the African-American experience throughout the … END_OF_DOCUMENT_TOKEN_TO_BE_REPLACED

Film: Just in time with the opening of movie theaters in Palm Beach County comes the season’s most … END_OF_DOCUMENT_TOKEN_TO_BE_REPLACED

Music: The very last concert Franz Joseph Haydn attended in his life was in March 1808, about a year … END_OF_DOCUMENT_TOKEN_TO_BE_REPLACED