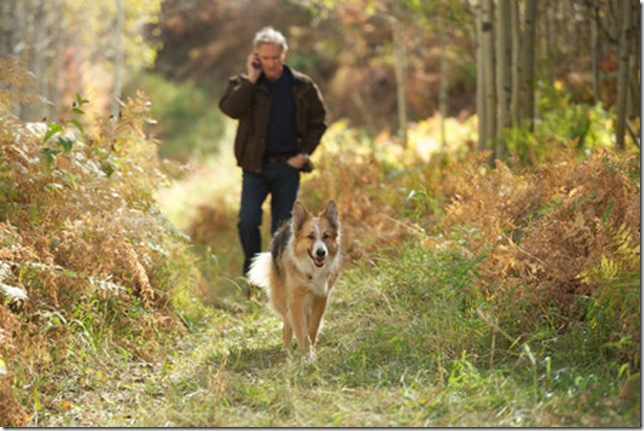 If you believe, as I do, that the world is divided between dog people and non-dog people, then you know which one you are.

We dog people are mighty and cliquey, often only hanging around each other. Like right-wing conservatives or Celine Dion fans, I know that non-dog-lovers exist — I just don’t run in the same circles.

If you’re one of these non-dog-people, you may watch a film like Lawrence Kasdan’s Darling Companion with the kind of critical distance and objectivity that I envy. As a dog person, I have trouble viewing any canine movie — except for the kind where the pooches talk or slam-dunk — with anything but full-on emotional subservience to its every sentimental whim. I blubbered over Marley & Me while most estimable critics torched its maudlin melodramatics, and my heart was in my throat for the majority of Darling Companion.

This is because, for dog people, there are few things more debilitating than the loss of a dog. Not by death; as bad as a pet’s demise is, in many cases the family can see it coming. But the loss of a dog — one minute it’s here, the next it’s run off, possibly never to be seen again, leaving our imaginations to run amok with horrible possibilities — is a crisis of existential magnitude.

This is the case faced in Darling Companion by overworked spinal surgeon Joseph Winter and his wife Beth (Kevin Kline and Diane Keaton) the day after their daughter’s wedding in the Rockies. During a routine walk in the forest, Joseph takes a phone call from his hospital, and Freeway, the family’s collie mix — discovered by Beth a year earlier on the side of a snow-covered highway — bolts off.

The rest of the picture consists of the Winters and their extended friends and family searching for Freeway, assisted less by the local law authorities — represented by Sam Shepard in a small comic role — than by the caretaker of their daughter’s wedding, Carmen (Ayelet Zurer). A beautiful mystic who describes quarreling humans as being “out of alignment,” Carmen claims to be psychically linked to the canine world, sending the family on wild dog chases whenever visions come to her.

Darling Companion is a winning, old-fashioned, instantly accessible and often amusing feature for families — which in this case does not necessarily mean a movie for kids (it’s much more mature than We Bought a Zoo, for instance). It’s a PG-rated film, but one moment of personal injury/bonding between the Winters — recalling the famous leeches scene in The African Queen — is shocking and transfixing, perfectly rendered in a long, single take.

Predictably, the lost dog brings the divided family together. Everyone, including the wonderful supporting players Mark Duplass, as Joseph’s nephew, and Richard Jenkins, as his future brother-in-law, learns valuable life lessons, even while the hope of finding Freeway seems to slipping away faster than sand in an hourglass.

But it works despite the elliptical familiarity of it all, because Kasdan, who co-wrote this semiautobiographical story with his wife Meg, is such an intelligent, generous and even-handed writer. Darling Companion never becomes a rigid morality fable, and it never demonizes or patronizes any of its characters for the decisions they make or the belief systems they hold.

Ultimately, though, we don’t keep watching Darling Companion to see the evolution of its Homo sapiens, well evoked as it may be. Freeway is the reason we’re glued to this story, and his physical removal a third of the way into the picture has an impact not unlike Janet Leigh’s notorious exit from Psycho or Lea Massari’s disappearance toward the beginning of L’Avventura: There is a noticeable void left by the character’s absence.

Whatever the result turns out to be, it’s a quietly wrenching experience for us dog people.

Film: Playwright August Wilson began his chronicle of the African-American experience throughout the … END_OF_DOCUMENT_TOKEN_TO_BE_REPLACED

Film: Just in time with the opening of movie theaters in Palm Beach County comes the season’s most … END_OF_DOCUMENT_TOKEN_TO_BE_REPLACED

Music: The very last concert Franz Joseph Haydn attended in his life was in March 1808, about a year … END_OF_DOCUMENT_TOKEN_TO_BE_REPLACED