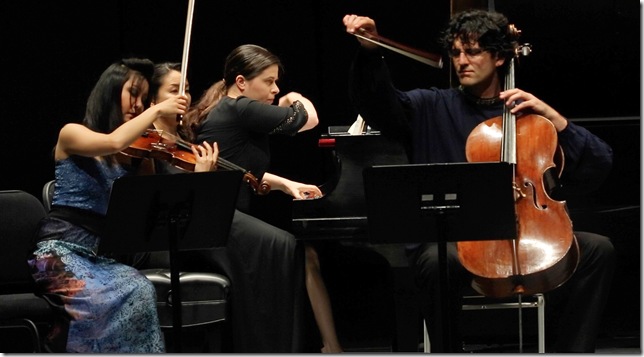 The directors of Miami’s Mainly Mozart Festival made much June 22 of the crowd they’d lured to the Knight Concert Hall for their chamber music summer season closer, subtitled My Homeland.

And indeed the mood in the big hall at the Arsht Center downtown was festive and celebratory, and they were rewarded with a concert that took the strong and innovative format from last year’s final show and demonstrated again why it works so well. Adding short videos as visual program notes and a world premiere dance to accompany one of the pieces was a smart and progressive choice last season, and it worked every bit as well this time around, too.

Also, the piano trio of artistic director Marina Radiushina, a pianist, accompanied by Israeli-born cellist Amit Peled and the Sino-Canadian violinist Susanne Hou, was exceptional, playing a varied salad of a program that was part flash, part canon and part discovery. There was much to admire and much to applaud, and it reaffirmed the importance of this rich festival and its more than two decades of service to South Florida.

The only downside here was some of the repertoire, which overall was too locked into the Central European-Russian orbit, giving the music too much of the same sound, and giving musicologist Frank Cooper less to talk about in the voiceovers for the program note videos. The notion of “homeland” is a broad one, and there are other nationalist pieces from other lands that would have brought more variety to the proceedings.

But the overall level of musicianship from the three performers was splendid. Cellist Peled was particularly remarkable, a player whose work as a member of The Tempest Trio has been enjoyed for several years by South Florida audiences. He has a full sound with an engaging sense of nervous tension and a beautiful, highly colored tone that communicates with directness and passion.

Peled, who like Hou did solo pieces accompanied by Radiushina as well as playing as part of a trio, brought a rarity to the stage with the Five Pieces on Folk Themes by the 20th-century Georgian composer Sulkhan Tsintsadze. These five pieces are very skillful renderings of folksongs in wide-ranging classical style, with just the right amount of showmanship and emotion to make them ideal choices for a recitalist looking for something fresh.

One in particular was the second piece, “Chonguri,” a nifty imitation of the traditional balalaika-style Georgian instrument. Peled played it with bravura and fierce technique, winning some warm applause from the crowd. In the fourth segment, “Nana,” Tsinstsadze used the same Georgian tune Tchaikovsky borrowed for the “Arabian Dance” in The Nutcracker; in Tsintsadze’s presentation it doesn’t have the same late-Romantic lushness, but the tune is beguiling nonetheless and Peled brought it off with a tender, simple beauty.

He also played a nationalistic mid-career work by Glazunov, his Minstrel’s Song (Op. 71) originally for cello and orchestra, a wanly pleasant piece gave Peled another chance to show off his mastery of the heartfelt cantabile style. Much more interesting was the “Prayer” from Ernest Bloch’s cycle From Jewish Life, which surely came off exactly the way the composer would have wished: heartfelt, intense, soulful and darkly beautiful.

Hou, a musician with a large technique and a powerful sound, was once a member of the fiddle extravaganza Bowfire, and she carries that show’s spirit of dazzle into her performances, snapping her head and hair quickly back and forth at points of high drama and pulling the bow off her instrument with a flourish.

She played two virtuosic pieces on this program, Ravel’s Tzigane and Bartok’s Romanian Folk Dances. The Bartok work, which came first, goes from tuneful straightforwardness to mysterious harmonics to an all-out Bucharest Hoedown ending. Hou dispatched them all with thoroughgoing technical mastery, and demonstrated her ability to really sell a piece, particularly through her forceful tone.

Tzigane is a much more elaborate showpiece, and one of the great challenges of the virtuoso repertoire. This piece, too, plays to Hou’s strengths as a performer, with an intensely dramatic opening cadenza that allowed her to show off her skill at rapid one-hand pizzicato and her spot-on intonation (with a tiny slip at the very top of the first big arpeggio run into the stratosphere). She played the piece with verve, energy and a full awareness of its role as a center-stage work.

Pianist Radiushina also took a solo moment with a pair of Rachmaninov song transcriptions, Lilacs and Spring Waters. She played the first with elegance and restraint (no milking it for sentiment) and the second with sweep and beauty, both offering ample evidence of what a fine pianist she is.

The other Rachmaninov work on the program, the early Trio Elegaique (No. 1), opened the concert in beautiful style. The three musicians play well together, and they performed this sweet and melancholy one-movement work with the same kind of taste, restraint and seriousness that marked the whole event.

The best music that afternoon came at the end, with three movements from Dvořák’s Dumky Trio (No. 4 in E minor, Op. 90), which were the basis for a world premiere ballet by choreographer Adriana Pierce, a young member of the Miami City Ballet who brought in four of her fellow dancers to perform it: Andrei Chagas, Emily Bromberg, Eric Trope and Ashley Knox. Pierce’s concept was that of a writer (Chagas) involved with a woman (Bromberg), but apparently unable to fully commit to her in the same way as the other couple (Trope and Knox, who may have represented ideals of what the couple wanted to be rather than two different people), and at the end she scatters his pages contemptuously across the stage.

Pierce is interested in the physical vocabulary of couples, and she laid out her scenario with clear touches, such as Trope and Knox going upstage, backs turned to Chagas and Bromberg, heads resting on each other as they stood still. Now there’s a happy pair, the choreography said, while downstage Bromberg and Chagas danced without a resolution. Pierce knows how to design intimate moves with a classical ballet rather than a modern dance orientation, and it gave the scenes something pretty and sophisticated, with fluid, graceful pairings amid a cool emotional temperature until the very end.

It worked very well, and fit the stylized folksong music expertly. There was an encore, too: Pierce’s choreography for the second movement of Paul Schoenfield’s Café Music, which closed last season’s concert, was brought back with Bromberg and Renan Cerdeiro. This sensuous pas de deux, set to Schonfield’s New Orleans blues-style treatment of a traditional Hasidic melody, stood up well on its return appearance and was a pleasure to see again.

This concert demonstrated again Mainly Mozart’s wisdom in constructing a musical event this way, and surely that, in addition to the very high level of musical and dance excellence on stage, helped explain why the audience was as large as it was, and even as young as it was. It said good things about the health of this series, and of the ability of intelligent presentation to draw a crowd — the kind of crowd that keeps this art form alive and well.

Film: Playwright August Wilson began his chronicle of the African-American experience throughout the … END_OF_DOCUMENT_TOKEN_TO_BE_REPLACED

Film: Just in time with the opening of movie theaters in Palm Beach County comes the season’s most … END_OF_DOCUMENT_TOKEN_TO_BE_REPLACED

Music: The very last concert Franz Joseph Haydn attended in his life was in March 1808, about a year … END_OF_DOCUMENT_TOKEN_TO_BE_REPLACED