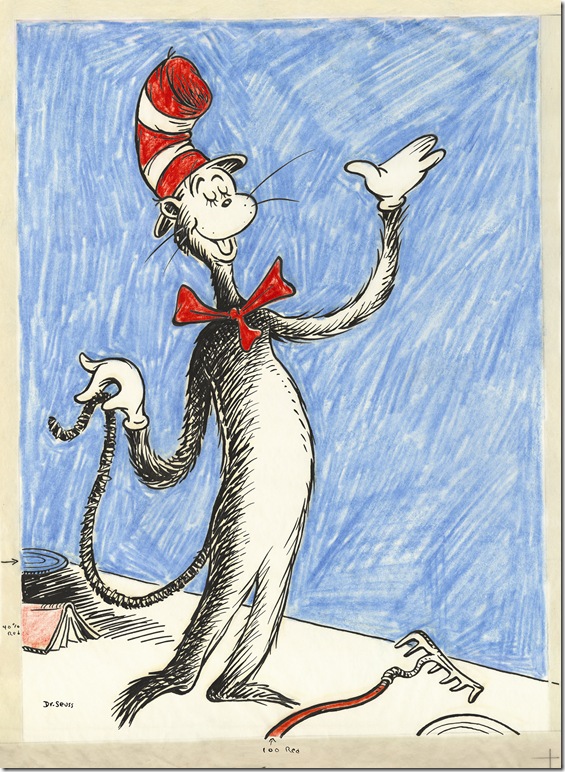 Most everyone knows these iconic lines from Dr. Seuss’ children’s book, Green Eggs and Ham:

But not everyone knows that in addition to his prolific children’s books, Theodor Seuss Geisel (aka Dr. Seuss) was a fine painter and illustrator.

A number of Dr. Seuss’s museum-quality works will be coming to The Gardens Mall in Palm Beach Gardens in The Art of Dr. Seuss, in conjunction with the Maltz Jupiter Theatre, the Cultural Council of Palm Beach County and the Ann Jackson Gallery of Atlanta. The exhibit opens Jan. 17 and runs through Feb. 14.

While the majority of American kids grow up on a diet of Dr. Seuss books, including Green Eggs and Ham, the third largest-selling book in the English language, the iconic Cat in the Hat, How The Grinch Stole Christmas, and The Lorax, many readers don’t realize that the man behind the story and illustrations had a lifelong ambition to be a fine artist. 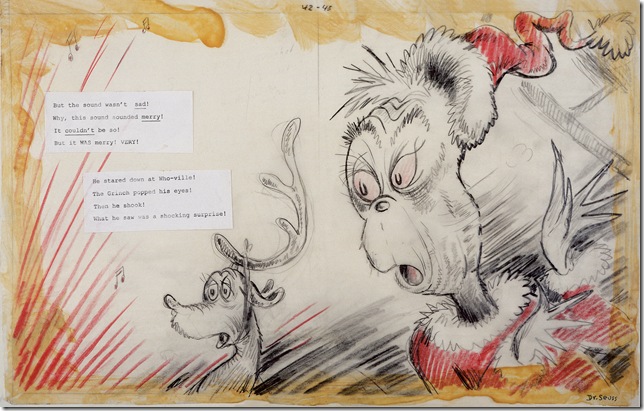 “It’s a secret that Ted kept during his lifetime,” reveals William Dreyer, director and curator of The Art of Dr. Seuss Collection. Geisel was born in 1904 and died in 1991. “What he loved to do more than anything was to paint. He was a workaholic and worked all day long and into the evening on his commercial projects.”

“His ‘midnight paintings,’ as he called them, were his efforts to realize his ambitions as a fine artist,” Dreyer says. “To relax at night, he’d paint. Ted created a body of artwork that he rarely or ever showed to the public.” 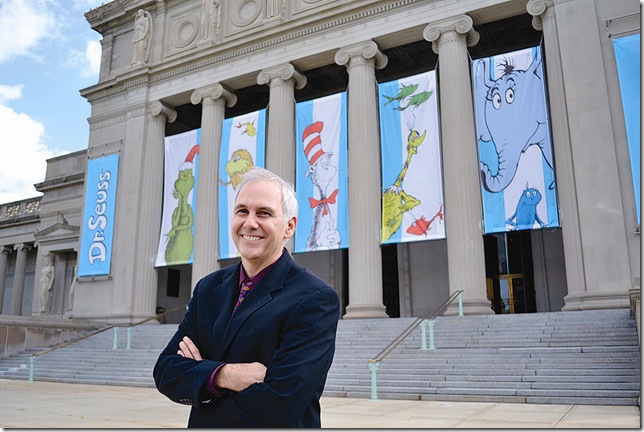 It wasn’t until shortly before his death that he realized he couldn’t hide these works and asked his wife, Audrey Geisel, to share them with his fans.

Audrey Geisel released The Secret Art of Dr. Seuss, a coffee-table book of her husband’s paintings, in 1995.

In 1997 she gave permission for the first collection of art to be created based on Geisel’s paintings and sculptures.

Also on display are bronze sculptures of his well-known characters, previously displayed at the Chicago’s Museum of Science and Industry, the William J. Clinton Presidential Center and The Preuss School at the University of California, San Diego, among others.

“This was the world’s first glimpse at the secret he was keeping,” says Dreyer. “It was quite surprising. People were not aware he painted fully developed works — in oil on canvas, watercolors or mixed media.”

“These works leave a legacy showing that Ted Geisel was a tremendous artist, overshadowed by his impact on children’s literature,” Dreyer says.

Dreyer says that during his lifetime Geisel didn’t want to be judged on his art.

“It was meaningful and important to him,” says Dreyer. “It was his own private domain that he didn’t have to put up for judgment.” 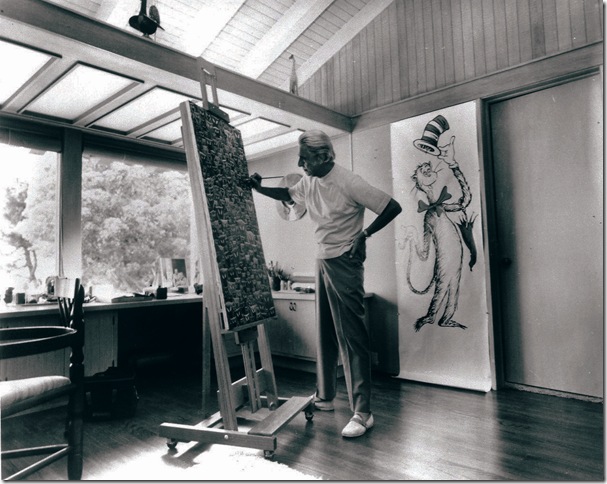 According to Dreyer, in this era, illustrators, including Norman Rockwell, were not regarded as fine artists and it wasn’t until 20 years after his death that his works were considered more than commercial.

“Ted was smart to wait,” says Dreyer. “If these works were judged during an earlier era, he wouldn’t have been given his due as a fine artist.”

“The work stretches beyond preconceived notions of who he was as an artist,” Dreyer says. “They are beautifully crafted and go beyond illustration into the realm of fine art. The works stand on their own and can be evaluated by museums and art critics.”

She says most people are shocked to learn of his private paintings and never realized that he was the illustrator of his own books.

“I love to see their faces light up when they discover these new works,” Jackson says. “They are curious and in awe and eager to learn more.”

“His work opens conversations and brings back memories of a more innocent time,” Jackson says. 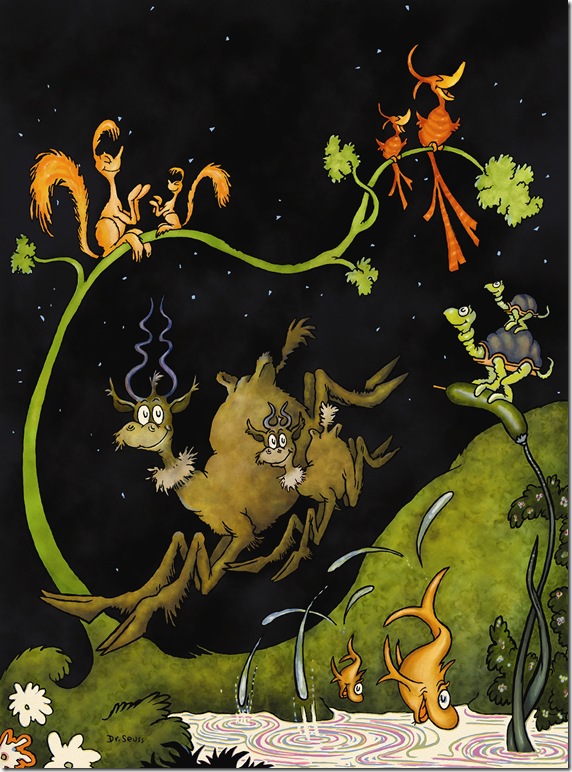 Many of these paintings depict Geisel’s rich, adult and even maudlin sense of humor.

Cat from the Wrong Side of Tracks, one of Dr. Seuss’s “alter ego” paintings, shows a cat, now in his eighth life, smoking a cigarette and playing pool.

The La Jolla Bird Woman Series, a series of 11 paintings including My Petunia Can Lick Your Geranium, Sunbathing Bird, The Martini Bird, Oh, I’d Love to Go to the Party but I’m Absolutely Dead, is a sly social commentary on his Southern California socialite neighbors.

What all these paintings have in common is their “Seussian sensibility,” a recognizedly Seussian style, at once kooky, quirky and comical — many using cats or birds as stand-ins for people. 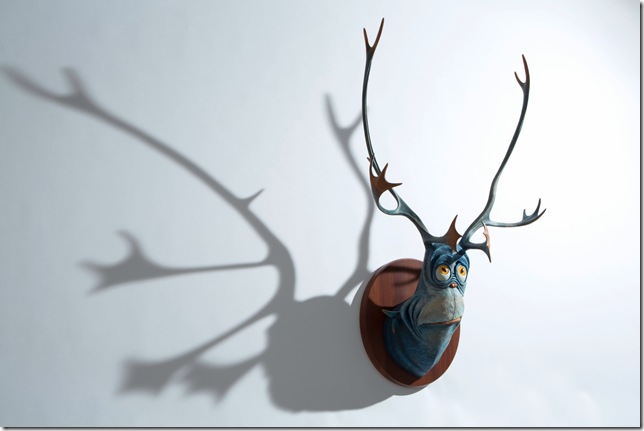 Some of Dreyer’s favorite pieces in the collection are Geisel’s sculptures in his Unorthodox Taxidermy series, with figures such as The Carbonic Walrus, The Two-Horned Drouberhannis, and the Goo-Goo-Eyed Tasmanian Wolghast, which he made with real horns, beaks and animal antlers.

In conjunction with the exhibit, local performers from the Maltz Jupiter Theatre’s Youth Touring Company will perform excerpts from their production of Seussical on Saturdays and Sundays at no charge to the public.

“The thing that makes this exhibit unique is that this is an environmental experience,” Kato says. “It’s twofold. The art exhibit is housed on our set, and the area becomes enlivened with a live performance.”

Film: Playwright August Wilson began his chronicle of the African-American experience throughout the … END_OF_DOCUMENT_TOKEN_TO_BE_REPLACED

Film: Just in time with the opening of movie theaters in Palm Beach County comes the season’s most … END_OF_DOCUMENT_TOKEN_TO_BE_REPLACED

Music: The very last concert Franz Joseph Haydn attended in his life was in March 1808, about a year … END_OF_DOCUMENT_TOKEN_TO_BE_REPLACED