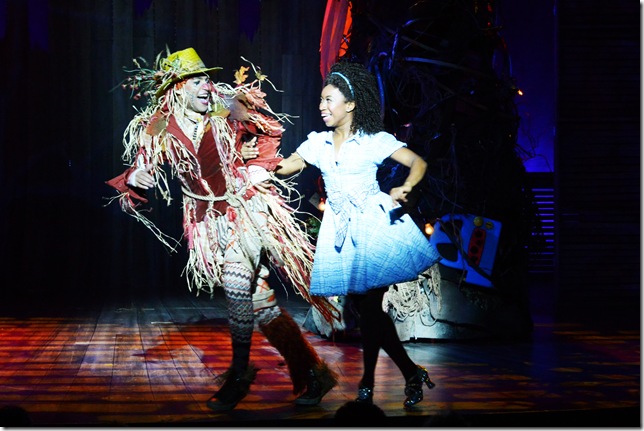 The Maltz Jupiter Theatre has produced some eye-opening new versions of classic musicals in recent seasons, often fueled by directorial concepts that lets us see the material in a new light. Think of the Jupiter company’s Hello, Dolly!, Music Man or the recent Fiddler on the Roof.

The company has been a major success, artistically and financially, which allows it to devote substantial resources to these revisionist staging efforts. That is usually money well spent, but with its current show, the 1975 Tony Award winner The Wiz, the effort results in an overstuffed production, brimming with puppets, animation, projections, flying, neon lights and Technicolor sets and costumes. It is dazzling eye candy, but the effects dwarf the action and get in the way of the musical’s emotional heart.

As the title suggests, The Wiz is a retelling of L. Frank Baum’s enduring fable The Wizard of Oz, but from an African-American viewpoint. It features a bouncy jazz and rock score by Charlie Small with several infectious tunes (“Ease on Down the Road,” “No Bad News”) and power ballads (“Believe in Yourself,” “Home”). But William F. Brown’s script keeps shifting tone, alternately taking Baum’s iconic story seriously and then undermining it with cheap jokes.

So you would think that director Andrew Kato’s plan to dazzle and distract us with large-scale spectacle has merit, but the visually attractive theatrical hijinks prevent our being swept up in the plight of Dorothy and her small band of needy compatriots. 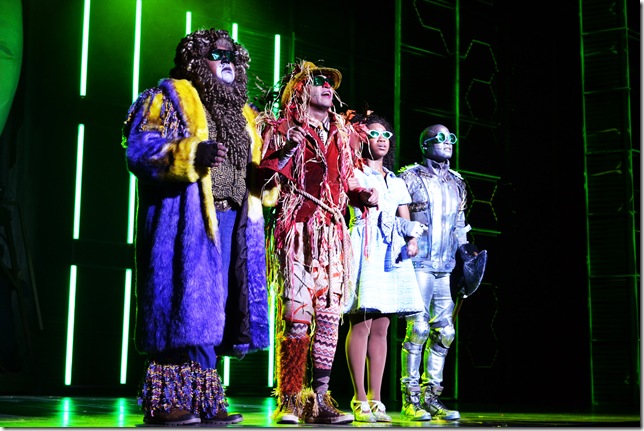 On the plus side is a small girl with a large singing voice and a winning smile, Destinee Rea, as Dorothy. Also an asset is Broadway veteran Brenda Braxton as Dorothy’s Aunt Em, kickstarting the show with her stirring rendition of “The Feeling We Once Had.” A couple of hours later she returns as Good Witch Glinda, whose “Believe in Yourself” would make anyone a believer. In the sizeable cast, Kingsley Leggs is a standout as the cocky Wiz, as are Trevor Dion Nicholas as the courage-challenged Lion and Zonya Love as mean-spirited Evilene, the Wicked Witch of the West.

The many styles of puppets stand in for characters ranging from back-up singer crows, menacing flying monkeys and swarms of butterflies, all designed by New York’s Puppet Kitchen, the group that came up with the Thai shadow puppet sequence in last season’s The King and I. Brad Peterson contributes flashy projections and ZFX, Inc. provides several gravity-defying flying effects.

There is much to enjoy in the Maltz’s extravagant Wiz, but chances are you will be captivated by individual elements, rather than the cumulative whole. The production is unquestionably flashy, but oddly soulless.

Film: Playwright August Wilson began his chronicle of the African-American experience throughout the … END_OF_DOCUMENT_TOKEN_TO_BE_REPLACED

Film: Just in time with the opening of movie theaters in Palm Beach County comes the season’s most … END_OF_DOCUMENT_TOKEN_TO_BE_REPLACED

Music: The very last concert Franz Joseph Haydn attended in his life was in March 1808, about a year … END_OF_DOCUMENT_TOKEN_TO_BE_REPLACED