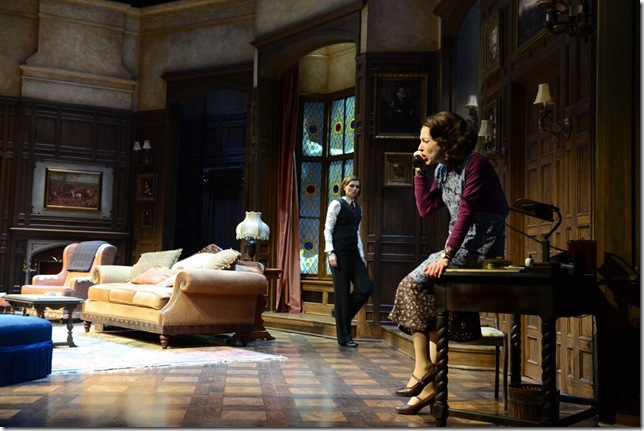 When I first saw Dame Agatha Christie’s The Mousetrap, in London in 1972, it was already a phenomenon that had run 20 years in the West End. And it had already warped into a campy tourist attraction played strictly for laughs.

At the Maltz Jupiter Theatre, director Peter Amster (The 39 Steps) tries taking the material seriously, digging for the dark tale hidden beneath its parlor game exterior. That is the preferable approach, but do not be surprised if you leave the theater scratching your head over how The Mousetrap could possibly be the longest-running stage show in recorded history, still playing in London after more than 26,000 performances.

After musicals, the Maltz audience likes a good whodunit, as seen by the successes here of two contemporary deconstructions of the genre — Sleuth and Deathtrap. The Mousetrap is a more conventional mystery, stemming from Christie’s recognizable formula — much copied and much parodied.

She brings together a handful of suspects to a remote guest house, cuts them off from the world by sudden natural circumstances — like a raging snowstorm — and soon the lights go out and the first victim falls dead. Then add a police inspector to interrogate the guests and staff and wait for clever deduction to produce a killer.

The Mousetrap does have a satisfying, unexpected solution, one which the Maltz understandably tries to extract a pledge from its audiences to not divulge. Still, along the way there are enough implausibilities that the play doesn’t really hold up to the scrutiny of the ride home.

As a result, the production succeeds or fails on the skills of the cast, who must convince us of some might far-fetched coincidences.

We first meet a young, married couple, Mollie (Katherine Amadeo) and Giles Ralston (Eric Parks), hotel management novices who are reopening creaky old Monkswell Manor, just as the radio reports a brutal murder in nearby London. Soon, the guests begin arriving, one by one so we can be properly introduced.

Despite the blizzard, police Sgt. Trotter (Christian Pedersen) manages to arrive, He suggests that there is a link between the London murder, a bygone abduction case involving three small children and the guest house’s roster. Trotter suspects the murderer is in their midst, and that he or she is intent on striking again, which is exactly what happens at the first act curtain. After intermission, Trotter hunkers down to his interrogations, closely held secrets get revealed, the murder is reenacted and the culprit is exposed. All very tidy, maybe too much so.

The cast does what it can, leaning heavily on their characters’ one-dimensional idiosyncrasies, delivered with a stylized British stiffness. Among those who are able to break through and stand out are the quirky Iverson, the androgynous Rastorfer and the high-strung Amadeo. Pedersen’s Trotter takes over much of the second act, handling it with a welcome crispness.

Credit the Maltz with trying to establish non-musicals as a part of its programming mix, but surely there is better work ahead this season than The Mousetrap.

Film: Playwright August Wilson began his chronicle of the African-American experience throughout the … END_OF_DOCUMENT_TOKEN_TO_BE_REPLACED

Film: Just in time with the opening of movie theaters in Palm Beach County comes the season’s most … END_OF_DOCUMENT_TOKEN_TO_BE_REPLACED

Music: The very last concert Franz Joseph Haydn attended in his life was in March 1808, about a year … END_OF_DOCUMENT_TOKEN_TO_BE_REPLACED