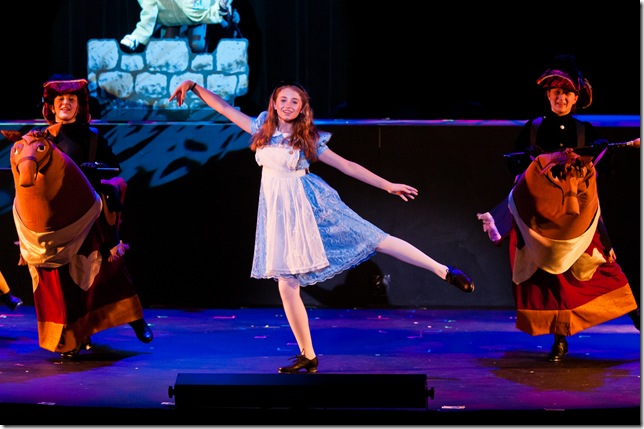 Lewis Carroll’s classic Alice adventures have been musicalized many times. Of course there was the Disney animated cartoon from 1951 and a live-action film with songs by Steve Allen (1985).

Liz Swados wrote a stage show, Alice at the Palace, that starred Meryl Streep 31 years ago and, Frank Wildhorn penned a version called simply Wonderland that ran briefly on Broadway two seasons ago.

Now the Maltz Jupiter Theatre is getting into the act with its visually spectacular, special effects-laden Through the Looking Glass, performed by youngsters aged 8 to 18 for audiences of all ages, on view Friday and Saturday nights, Nov. 15 and 16.

Why another show based on Alice? Maltz producing artistic director Andrew Kato, who conceived and directed the musical written by his childhood pal and former Burt Reynolds Theatre intern John Mercurio (Academy), has a three-fold answer.

“First, we were identifying all these young people in our community who we felt really had the talent to create a new work for young audiences. And this story seemed to be a good teaching experience and a way for us to show what’s possible in theater,” says Kato.

“I’ve always had a particular passion to integrate (theatrical) elements into storytelling, and the idea of doing a piece like this, with the wacky journey that Alice goes on, it really invites using those elements, such as puppetry and black light and stage illusion.”

Thirdly, and perhaps most importantly, Kato and Mercurio found that the story could be a vehicle for the social messages they wanted young audiences and performers to receive.

“Our Alice, a contemporary student, is being mistreated in school, not fitting in, feeling like an outsider, being bullied,” explains Kato. “In our version, Alice has to travel through eight doors in order to get home again. And in each of the eight lands she goes into, she learns about herself.

“I think in any good musical, there has to be some lesson learned or a journey,” adds Kato. “And we wanted to do it in an entertaining way, because kids’ attention spans are short. So the piece is 61 minutes.” 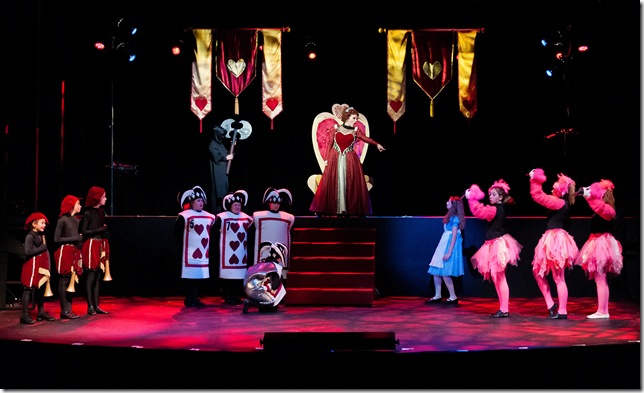 That length could be a stumbling block to getting a commercial production of Through the Looking Glass somewhere, but Mercurio feels the show is at the right length. “I think we were so careful about making this sort of burst at the seams at an hour, so that it really feels like a chock-full entertainment. I think adding more will feel like it’s overly extended.” Another possibility being mulled would be to write a second short companion musical to fill out the evening.

The Maltz gave Kato and Mercurio a three-year commitment to produce Through the Looking Glass, developing it incrementally. “It is the nature of any new work, there’s always room for improvement, for tweaking,” says Mercurio. “Especially with a new cast coming in. As a repertory production, it’s interesting seeing the kids in different roles from last year to this year and seeing how the piece changes as a result.”

In this second year’s production, the script has changed somewhat, as theatrical elements have been added and others moments clarified.

“And we even juiced the ending,” notes Mercurio. “It ended more contemplatively and quietly last year, which is very sweet, but it didn’t feel like it was as exuberant as it could be. So we’ve brought in a big reprise of the opening number that feels right and certainly more exciting.” 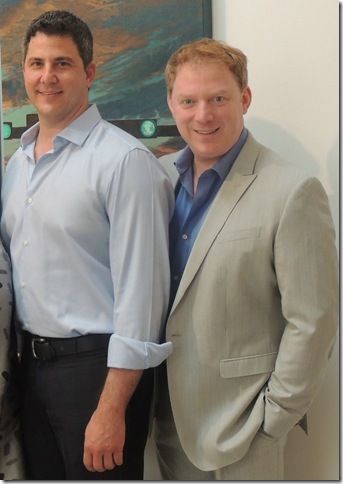 This marks the fifth collaboration between Kato and Mercurio. The composer-lyricist was uncertain about the idea of an Alice musical when Kato first brought it to him. “To be honest, there’s always a leap of faith I take with Andrew,” he says. “Even if I don’t get it right away, I know that there’s something there.

“As much as I admired Lewis Carroll’s characters and all, I’ve never really warmed to the story, because I never quite got what the point of it all was. So the thought of trying to create that really excited me. The challenge for us was finding our own cohesive narrative to put onto the piece.”

They feel that Through the Looking Glass can have a substantial life in non-profit theaters around the nation that emphasize developing new, young audiences. Helping to interest those theaters is a cast album of the show which the Maltz just recorded. “It’s pretty and shiny and it sounds amazing,” says Mercurio. “I think it will be a very useful tool to send out to regional theaters, to get the word out about the show.”

Mercurio will always take the opportunity to tinker with his shows, but he feels that Through the Looking Glass is close to being finished now. “For an hour, the entertainment value is through the roof. It’s very fast-paced and energetic,” he insists.

“The eye-popping visual effects, the sort of contemporary pop score is kind of infectious. You’re going to see tap-dancing eggs, jitterbugging flowers, huge monsters. It’s ‘Alice in Wonderland,’ but unlike you have ever seen it.”

Film: Playwright August Wilson began his chronicle of the African-American experience throughout the … END_OF_DOCUMENT_TOKEN_TO_BE_REPLACED

Film: Just in time with the opening of movie theaters in Palm Beach County comes the season’s most … END_OF_DOCUMENT_TOKEN_TO_BE_REPLACED

Music: The very last concert Franz Joseph Haydn attended in his life was in March 1808, about a year … END_OF_DOCUMENT_TOKEN_TO_BE_REPLACED