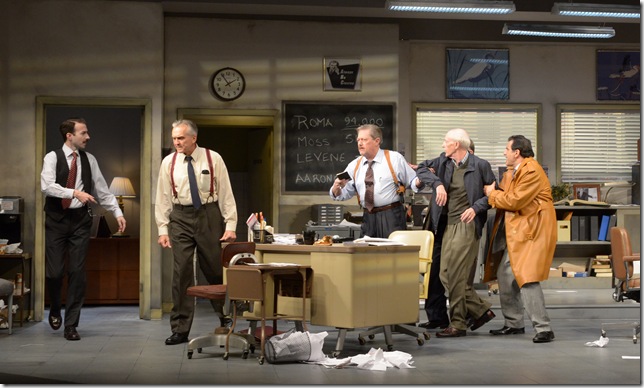 The real estate world of David Mamet’s Pulitzer Prize-winning Glengarry Glen Ross is a cutthroat, dog-eat-dog business, where the salesmen are pitted against each other to see who will win a Cadillac and who will lose his job. It is Mamet’s jaundiced view of the American way of commerce, an all-male landscape brimming with testosterone and casual profanity.

As seen at the Maltz Jupiter Theatre, the stakes are high for Mamet’s characters, who sell probably dubious resort land in Florida, located far from their dreary Chicago office. Closest to the edge of unemployment is Shelly “The Machine” Levene (Rob Donohoe), the former sales ace, now over-the-hill — Mamet’s version of Arthur Miller’s Willy Loman. He blames the stale sales leads he has been given for his recent inability to close a deal, a self-perpetuating system where the more productive salesmen get fed the better prospects.

Mamet populates his play with numerous vivid characters. In addition to Levene, there is Ricky Roma (Peter Allas), the nimble-tongued, nattily dressed perennial sales board leader, and Dave Moss (John Leonard Thompson), a human pit bull, angry at the world. The office manager, John Williamson (Cliff Burgess), is in over his head and insecure, not respected by his employees, who know his only qualification for the job is being the boss’s nephew. And there is James Lingk (Dan Leonard), a meek potential customer of Roma’s, who intimidates him almost as much as his own wife.

We meet them all first in two-character scenes at a Chinese restaurant near the office. There Mamet gets our ears attuned to his verbal riffs — a plea for better sales leads, idle expressed thoughts of stealing those leads and the beginnings of a pitch to a potential pigeon.

After intermission — when a considerable number of opening-night theatergoers decided to leave, presumably because of the play’s strong language — we get the main event, as the action moves to the sales office where a robbery of those leads, as well as contracts, office equipment and telephones, has taken place.

As a detective interrogates the sales force, Levene arrives with a new self-confidence, having just sold multiple units. His ebullience will be short-lived, but Donohoe plays it to the hilt, as well as the subsequent deflation. Meanwhile, Allas’s Roma fires verbal doubletalk at Lingk to keep him on the hook, as the office scene grows increasingly chaotic, skillfully staged by J. Barry Lewis.

This all takes place on a shabby, ransacked office set by Anne Mundell, a distinct contrast to her red lacquer Chinese eatery of the first act. The sales force knows to dress for success, with flashy double-breasted power suits by designer Robin McGee.

In a little more than 90 minutes, Mamet pays homage to the scrappy, glib real estate soldiers he worked alongside in an eye-opening summer job when he was young. In their desperation to succeed or at least survive is a metaphor for the way America in the trenches does business.

Film: Playwright August Wilson began his chronicle of the African-American experience throughout the … END_OF_DOCUMENT_TOKEN_TO_BE_REPLACED

Film: Just in time with the opening of movie theaters in Palm Beach County comes the season’s most … END_OF_DOCUMENT_TOKEN_TO_BE_REPLACED

Music: The very last concert Franz Joseph Haydn attended in his life was in March 1808, about a year … END_OF_DOCUMENT_TOKEN_TO_BE_REPLACED