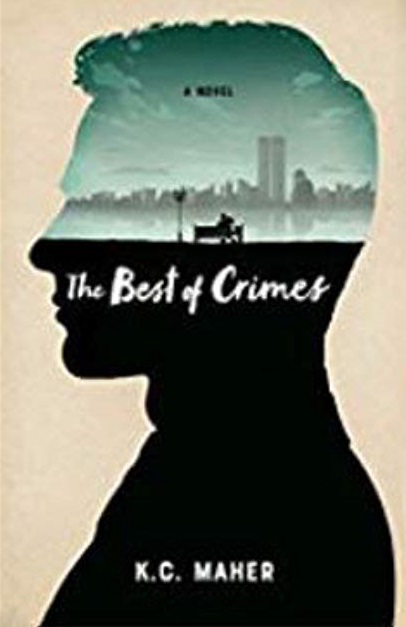 Timing is everything. In this #MeToo era, how does an author announce her book, The Best of Crimes, is about a man in love with a 13-year-old girl?

With a spoiler on the cover.

“This is … about a man who is faced with temptation but does not succumb.”

Yet bloggers, who may not have read the entire book, are already disparaging it and chatting about the pedophilia in Vladimir Nabokov’s Lolita, says author K. C. Maher. (Lolita was inspired by the true-crime 1948 abduction of 11-year-old Sally Horner.)

“I worry that reviewers will think of R. Kelly,” Maher said in an interview.

Days after her remarks, the Jeffrey Epstein case exploded, along with references to his private jet, nicknamed the Lolita Express.

Due to the quality of the writing and character development, this novel has a lot of value, but is not going to be easy to promote.

Maher’s book opens with Walter turning himself in for kidnapping the girl, but the police won’t prosecute. They know he has mentored Amanda since she was a toddler. She was his neighbor and his daughter’s best friend, lonely and neglected. But after the financial crash of 2008, Walter’s gold-digging wife leaves, taking their daughter with her.

It is then that Walter and the barely adolescent (and, as described by the author, beautiful, flirtatious and provocative) Amanda draw closer. Later, Walter takes her across state lines, without parental permission.

When they return, Walter insists the cops arrest him. Finally they do.

“Walter is a hero to me. I don’t like to emphasize the crime element,” Maher said. “But the reviewers see him as a pervert. They only read the beginning, but the end is Disney.”

“#MeToo has everyone riled up, as it should,” Maher said. “But that’s different from my book, because the movement is about unequal power dynamics. In the novel, Walter loses his job on Wall Street, because he didn’t want to be promoted into management and boss people around.”

“Walter is lonely and knows that as much as he has done for Amanda, she has done even more, by helping him out of his shell. Good fiction does not need this kind of explanation.”

And while Maher says she would never compare her literary fiction to the towering Nabokov, her book is certainly a cut above many contemporary novels. It’s clear she is a perfectionist; she rewrote the manuscript multiple times over six years. (It started as online serial fiction until the trolls got to be too much.)

The two main characters are very well thought out and the budding relationship feels authentic, not cloying or overheated. Maher’s earlier work has appeared in literary journals and shortlisted for prestigious awards. Her craft, years of practice and sincerity show.

Maher likens her writing career to “Always being early to the station, yet missing the train.”

Getting back to that timing thing.

As recently as 2015, Colette’s Gigi was a Broadway revival. It’s about a 15-year-old Parisienne, in training to be a “courtesan” with her 33-year-old “uncle.” He marries her. The cast sings, “Thank Heaven for Little Girls!” (The musical comedy will be at Lynn University next March.)

This “distinguished man charmed by teen innocent” plot was mainstream with big-name talent, such as Lerner and Loewe and Maurice Chevalier. The movie star Leslie Caron played the adolescent love interest in both Gigi and the similarly themed Daddy-Long-Legs in the 1950s.

Maher is used to marching to her own drummer.

Instead of getting an MFA, she studied great books and mathematics in the original Greek. She wrote her thesis on the 18th-century German philosopher Immanuel Kant, on the existence of God. Maher taught herself to write as her two young daughters napped. She brought in some money by writing about plumbing for a home remodeling magazine. She trained herself by writing haiku descriptions of faucets and toilets. No one noticed.

Maher was twice relieved of jury duty in New York City, even being escorted out of the courtroom by armed guards, for stating her opinion about two medical malpractice cases.

“My personality runs to extremes. I got severe injuries from rollerblading before my husband sold the skates,” she said. “I don’t recognize my limitations.”

“I refused to go the Coen Brothers route and say, ‘based on a true story.’ The book is a complete work of fiction.”

The least believable part of the book isn’t the romance. Rather it’s that Walter insists on going to prison.

Maher suggests Walter is guilty over the role he played in creating risky financial products for Wall Street and helping to bring about the 2008 crash. “He wanted to punish himself.”

She added, “A bad, or impure thought doesn’t make someone a bad person. A bad action does. Walter does nothing wrong, he is a hero, but he feels guilty for what he feels.”

Her sequel, about Walter’s prison time and other developments, will be told from the point of view of Amanda, as an adult.

Film: Playwright August Wilson began his chronicle of the African-American experience throughout the … END_OF_DOCUMENT_TOKEN_TO_BE_REPLACED

Film: Just in time with the opening of movie theaters in Palm Beach County comes the season’s most … END_OF_DOCUMENT_TOKEN_TO_BE_REPLACED

Music: The very last concert Franz Joseph Haydn attended in his life was in March 1808, about a year … END_OF_DOCUMENT_TOKEN_TO_BE_REPLACED