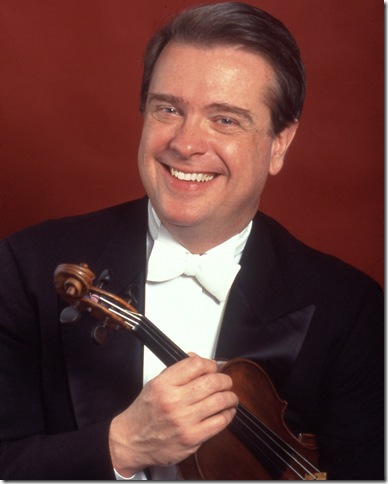 Perhaps it was Johannes Brahms who said it best:

“Using the technique adapted to a small instrument the man writes a whole world of the deepest thoughts and most powerful feelings,” he wrote to Clara Schumann, describing the celebrated Chaconne of J.S. Bach. “If I could picture myself writing, or even conceiving, such a piece, I am certain that the extreme excitement and emotional tension would have driven me mad.”

The great Chaconne that ends the Violin Partita No. 2 in D minor (BWV 1004) of Bach is one of several solo-instrument milestones established by the composer, including the six suites for solo cello, that have enriched the repertoire immeasurably for nearly 300 years. The Chaconne and its Partita, along with the sixth Cello Suite (in D, BWV 1012), were the major works Tuesday night on the first program in the faculty concert series at Palm Beach Atlantic University’s Stringendo School for Strings summer music camp.

The husband-and-wife team of violinist James Buswell and cellist Carol Ou, both faculty members at Boston’s New England Conservatory of Music, each gave strong renditions of their respective solo works. The two also performed a relatively new piece, the Double Chaconne for violin and cello of the American composer Richard Toensing, recently retired from the composition faculty at the University of Colorado.

Toensing’s piece, which came in the middle of the program, proved to be a highly dramatic, tremendously difficult series of variations on an aggressive, explosive theme that ended, like the piece did, with a reminiscence of the famous D-flat appoggiatura before the C that closes the two-cello String Quintet (in C, D. 956) of Schubert. Toensing takes surprisingly little advantage of opportunities to have the two instruments playing together, preferring instead to write mostly a series of dialogue-style passages, several of them featuring fierce tremolandos.

He does, however, employ a wide variety of string colors, from high-floating harmonics to pizzicati plucked over the fingerboard, and chromatic scales that slither between the two instruments, like runners in a snake relay. The overall tone is intense and powerful, and while Toensing’s two themes aren’t particularly compelling, he has created a piece that’s impressive and commanding when it’s well-played, as it surely was here.

Buswell opened the concert with the Bach Partita, after extensive remarks about the importance of communicating with audiences, and a shout-out to his 10-year-old daughter Anna, who was seated in the hall. This is a violinist with a large, commanding sound, and he seems to be able to conjure up that sound with minimal effort, approaching his instrument in a way that seemed almost casual.

He gave a satisfying, accomplished reading of the Partita, one in which technique and interpretation went hand-in-hand comfortably. Buswell chose good tempos and didn’t linger, and the concluding Chaconne, like the four movements before it, was not especially epic or expansive. 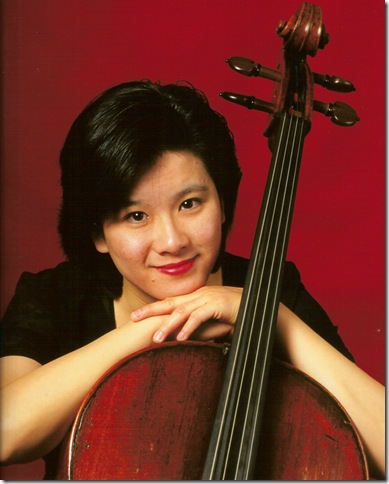 Yet the Chaconne is something of an adventure for the audience and the performer, and here it could have used some more drama, some more portentous pacing. The mid-point change to D major, for instance, was modest and quiet, but didn’t have the kind of setup that makes it magical, that makes the move from stress to repose so fulfilling. Still, it was thrilling to hear the piece, and Buswell clearly knows its ins and outs.

Ou (pronounced Oh) closed the concert with the Cello Suite No. 6, which unlike the other five was written for a five-string instrument, and playing it on a standard cello presents physical challenges in addition to interpretive ones. But it was in good hands: Ou is a fine cellist, a player with masterful technique and a beautiful sound.

The emotional high point of the suite, the Sarabande, was quite lovely, aided by a full-throated treatment of the piece’s intense melodic line. Ou’s two Gavottes were crisply played, and in the Gigue, Ou demonstrated admirably clean control of the dance’s rapid passagework.

The Stringendo series’ programs this month are of a similarly high quality from the standpoint of repertoire, and to have begun it with these two supreme works of Bach sets a good tone of serious music-making for this effort, and for a time of year when vacation is usually uppermost in the mind.

The next concert in the Stringendo series features Atlanta Symphony violinist Jay Christy and Cleveland Orchestra cellist Alan Harrell, along with baritone Lloyd Mims, Bergonzi String Quartet violinist Glenn Basham, and pianist Tao Lin, who teaches at Lynn University. On the program are Samuel Barber’s Dover Beach (Op. 3), the Mendelssohn Piano Trio No. 1 (in D minor, Op. 49), and the Schubert Trout Quintet (in A, D. 667). The concert begins at 7 p.m. Tuesday in the Persson Recital Hall on the PBAU campus. Tickets: $15. Call 803-2970 or send an e-mail to ticketcentral@pba.edu.

Music: The very last concert Franz Joseph Haydn attended in his life was in March 1808, about a year … END_OF_DOCUMENT_TOKEN_TO_BE_REPLACED

Film: Major League Baseball culminates each season with the World Series, but to find the true … END_OF_DOCUMENT_TOKEN_TO_BE_REPLACED