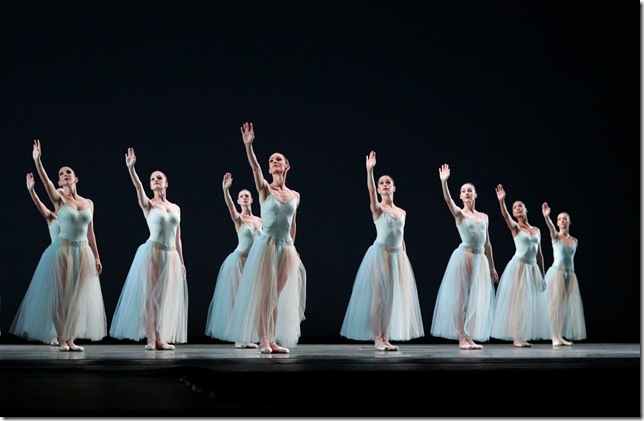 Miami City Ballet’s Friday evening program began with George Balanchine’s Ballo Della Regina. Within just a few seconds, it was clear that this was a perfect opener to not only this evening’s program and the ﬁrst of four programs to be presented at the Kravis, but also to the ﬁrst season that is fully under the leadership and vision of Artistic Director Lourdes Lopez.

In a pre-curtain appearance, Lopez began by thanking the dancers for their hard work and promised “to move and entertain us” as MCB ushered in its 28th season and this performance of Program 1: First Ventures did just that.

Ballo Della Regina is a dizzying and brilliant representation of Balanchine’s choreography. The dance is ﬁlled to the brim with lightning quick steps and though in the program, the work references to the tale of a ﬁsherman’s search for a perfect pearl, it came across as just an exuberant melding of articulate footwork to the abundant notes that emanated from excerpts of Giuseppe Verdi’s Don Carlos.

Costumed in simple but very beautiful costumes by Ben Benson, the dancers were impeccable; clean, technically dazzling and infectiously happy. It was a sublime match for these MCB dancers.The central couple was danced by the engaging and promising Nathalia Arja and the buoyant and talented Renan Cerdeiro. As they both effortlessly skimmed across the ﬂoor with an innate ease of movement, one wondered if that might stem from their shared Brazilian nationality where dance and music is such an integral part of the culture.

Arja, who is still listed in the program as a corp de ballet member, is not new to performing soloist roles. She is a mover and certainly a performer of whom one hopes to see much more. The ﬂow of her upper body ﬂoating over the exhilarating speed and clarity of her footwork was impressive for such a young performer.

Arja (and the other dancers) had the opportunity to be rehearsed by Merrill Ashley, a former star of the New York City Ballet whose extraordinary allegro work and musicality inspired Balanchine to created this work for her in 1978. 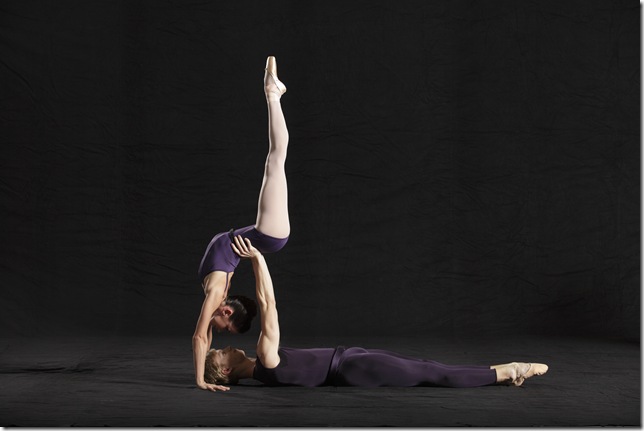 Appropriately sandwiched between two stellar Balanchine works was the company premiere of Polyphonia by English choreographer Christopher Wheeldon. Though Wheeldon was trained by the Royal Ballet School and danced with the Royal Ballet, he is viewed as a New York City Ballet’s protégé.

After performing with NYCB for some years, Wheeldon retired from dancing at the age of 28 to pursue his promising career as a choreographer. In 2001, he choreographed Polyphonia, his ﬁrst work as NYCB’s resident choreographer. From 2001-2008, he choreographed 34 more ballets for NYCB before co-founding with Lourdes Lopez a dance company called Morphoses.

Polyphonia was kinetically and visually a strong contrast to the two Balanchine works on the program but its roots are clearly in ballet and inﬂuenced by Balanchine. Simply and sleekly dressed in dark purple, four couples stretched across the stage in a line and introduced Wheeldon’s stark and etched movement as the monochromatic lighting cast shadows of the dancers on the backdrop.

Performed to 10 excerpts of complex piano compositions by composer György Ligeti, who created them over a period of 40 years and performed live by company pianist and musical adviser Francisco Rennó, Polyphonia initially seems disconnected with its changing rhythms and atonal sounds.

In the ﬁrst excerpt, it was a struggle to differentiate between the dancers as the stage was darkly lit in somber, ﬂat lighting. There were just the shapes of the four undistinguished couples doing completely different movement. Then, out of the large array of movement came moments of connection as two couples brieﬂy share the same movement phrase. The women were out in front and partnered from behind with strength and agility by the men who lay the choreographic foundation, which seemed architectural in comparison to the other works on the program.

The lightning reﬁned as the dance evolved differentiating each section as the dancers performed duets, trios and solos in which their unique movement qualities emerged giving texture and depth to the choreography. Tricia Albertson had a particular clarity and connection to the movement.

Closing the program was Balanchine’s iconic Serenade, timeless in its pure elegance and musicality. Though nicely performed it was not as mesmerizing as it can be when every arm and head ﬂows identically. Jennifer Carlynn Kronenberg (recently returned from maternity leave) was back in excellent form and very beautiful in the lead role.

In the poignant last movement, Kronenberg was joined by the eye-catching Sara Esty, the lovely Emily Bromberg and the elegant Chase Swatosh. The evening ﬁnished with the lasting image of Kronenberg carried like a religious statue ceremoniously down the diagonal: a tribute to femininity.

Miami City Ballet performs this program again tonight at 8 and at 1 p.m. Sunday at the Kravis Center. Call 832-7469 or visit www.kravis.org.

Film: Playwright August Wilson began his chronicle of the African-American experience throughout the … END_OF_DOCUMENT_TOKEN_TO_BE_REPLACED

Film: Just in time with the opening of movie theaters in Palm Beach County comes the season’s most … END_OF_DOCUMENT_TOKEN_TO_BE_REPLACED

Music: The very last concert Franz Joseph Haydn attended in his life was in March 1808, about a year … END_OF_DOCUMENT_TOKEN_TO_BE_REPLACED