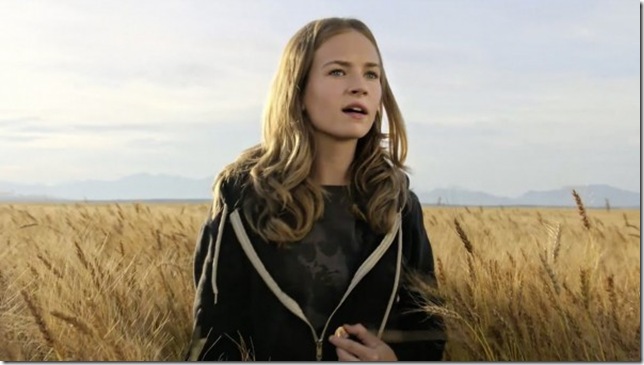 Is Tomorrowland a movie, or a 130-minute advertisement for a theme park?

Borrowing its title from the futuristic Disneyland/Magic Kingdom attraction of the same name, Brad Bird’s second live-action feature is certainly his most shameless. In this expensive monument to CGI plasticity, Bird’s vision — eccentric, referential, inspired — vies for your attention with blatant product branding for its studio (Disney, natch), with potential for cross-promotional marketing embedded in nearly every scene.

Yet Bird is an artist and sci-fi geek, with concerns about the maintenance of this little blue dot, so that when his characters begin hectoring us with nuggets of philosophical bromides as old as The Twilight Zone, it sounds dissonant against the synthetic shallowness of the milieu. But at least we have some capable actors, Bird’s fleet-footed direction, and a bit of old-fashioned repartee to stimulate our senses.

Tomorrowland, in this movie’s parlance, is a Jetsonian enclave in the cosmos, where elite thinkers and scientific frontiersmen once tried to establish a futuristic idyll free of wars, famines, climate change and other destructors of Mother Earth. But the future ain’t what it used to be: By the time the teenage Casey Newton (Britt Robertson), a preternaturally brilliant engineer and dreamer, is recruited to visit Tomorrowland, the place is a vacant shell of its former self, an abandoned utopia.

Problems arose when Frank Walker, a child inventor lured into the Tomorrowland community while pitching his jetpack at the ’64 World’s Fair, eventually developed an Earth doomsday clock with an ever-looming prognosis. Excommunicated from Tomorrowland by his superior — who has his own ideas about the future of Earth — Walker grew up into George Clooney, a bitter recluse living in a Grey Gardens manse, the actor’s natural charms unconvincingly boxed into a grizzled “get off my lawn” type. With his apocalyptic calculus forecasting global destruction in roughly a month and a half, it’s up to Walker, Casey and Athena (Raffey Cassidy) — an android still committed to the original vision of Tomorrowland — to save the world.

It isn’t until this mismatched trio commences its universal quest that Tomorrowland finally begins to crackle with wit; prior to that, it’s all corny platitudes from overly bright children, aerial spectacles in front of obvious green screens and, in an extended battle scene in Walker’s tripwired house, choreographed high jinks conjuring the juvenilia of Home Alone. Much of the film’s exhausted first act is saved only by the zip of Bird’s direction, his inner animator propelling the action forever forward.

Eventually, the movie’s weightier themes emerge, and they tumble forth in droves: Tomorrowland is about probability and the multiverse, about time travel and the future’s predeterminance, about the capacity of thoughts to create reality, about AIs that develop human emotions, about the dire warnings of climatic destruction that we’ve been blissfully ignoring for decades. Conservatives who found global-warming alarmism in the subtext of movies like Happy Feet will find no such “insidiousness” in Tomorrowland; this film takes a blunter approach, leaving nothing to construe. “To save civilization, I would show its collapse,” utters the movie’s archvillain, played by Hugh Laurie, in a summa that I could swear was lifted verbatim from one of Ultron’s declarations in the new Avengers movie.

This sort of preachiness is leavened only slightly by its lacerating correctness, and it makes for a busy jumble of a blockbuster. The movie’s heady ideas will please the earthy New Age enthusiasts in the audience but fly over the noggins of the youngsters who will yip with abandon at the beheadings of preening robots or the spectacular launch of a rocket from the middle of the Eiffel Tower.

Tomorrowland is two movies in one — a message movie for adults and escapism for kids — whose bifurcated appeal is best represented in the topography of its Tomorrowland sets, which under Bird’s lens resemble both Escher and Seuss, Dali and Disney. He tries to have it both ways, but in the eternal grudge match between art and commerce, you can guess what wins.

Film: Playwright August Wilson began his chronicle of the African-American experience throughout the … END_OF_DOCUMENT_TOKEN_TO_BE_REPLACED

Film: Just in time with the opening of movie theaters in Palm Beach County comes the season’s most … END_OF_DOCUMENT_TOKEN_TO_BE_REPLACED

Music: The very last concert Franz Joseph Haydn attended in his life was in March 1808, about a year … END_OF_DOCUMENT_TOKEN_TO_BE_REPLACED