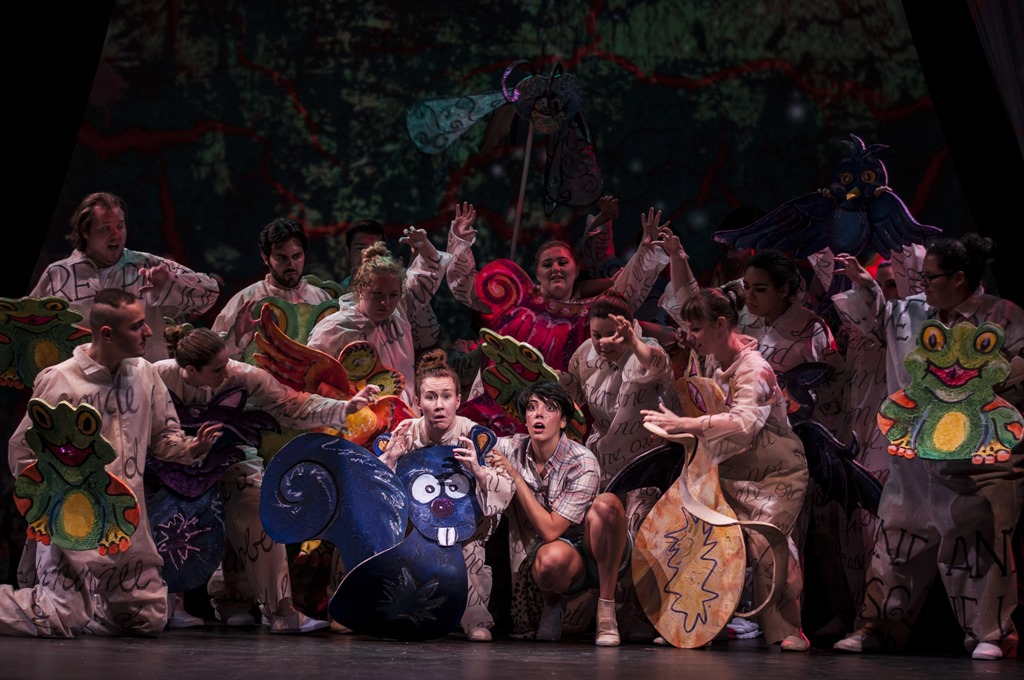 Isabel Signoret (center front) as The Child with the cast of L’Enfant et les Sortilèges. (Photo by Kristin Pulido)

The operatic repertory is vast and rich, and some of its greatest gems can be found in shorter pieces.

That’s not to say we hear them all that often in South Florida, so the Miami Music Festival’s mounting of two one-act masterpieces that almost never turn up on our area stages was much to be welcomed. Although one of the productions was more of an apprentice presentation than the other, both operas showcased good singers and a large, fine student orchestra.

The double bill of Maurice Ravel’s L’Enfant et les Sortilèges and Giacomo Puccini’s Gianni Schicchi capped a long weekend of performances that also saw performances of Puccini’s La Bohème in a contemporary setting. The Miami Music Festival, now in its third year centered primarily at Barry University in Miami Shores, has grown substantially in its short lifespan after being founded by Michael Rossi of the Washington National Opera, who conceived it as a summer project for his wife’s hometown of Miami.

Sunday’s performances at the Broad Performing Arts Center at Barry University of the Ravel-Puccini double bill opened with the Ravel in an apprentice production that featured several newcomers to the stage. With two exceptions, the singing was hit or miss, with choral moments, particularly the exquisite final minutes of the opera marred by underpowered male singing.

The production looked charming, though the costumers were fairly primitive and a lot of the visual interest had to be filled in by projections, but since this was a production geared to families with young children, it worked very well. The modest house at the Broad Center seemed to like it quite a bit, and it held the interest of the many small children who were there.

The orchestra, led by Steven Gathman, spilled onto the stage and the side of the house from the pit, and with the exception of some substandard brass playing at the end, this was a very good orchestra that was conducted sensitively and that gave a tender account of this beautiful score. David Carl Toulson’s stage direction was adept given the restricted sets and costumes, and the various animals and household objects moved around the stage with engaging enthusiasm.

The best singing in the ensemble came from Linsday Espinosa as Le Feu, who has the most acrobatic vocal lines in the piece, and while the tumbling roulades of her lines were somewhat stiff, she still made a good impression. But the finest singer on stage by a long stretch was The Child, sung here by the mezzo Isabel Signoret.

Signoret has a very lovely mezzo, one that seems ideal for French repertory; the liquid quality of its vowels seem to resonate just-so with her instrument. Her voice has a beautiful centeredness to it and a mature color that made one think of her in Berlioz and Fauré art song, and in the Mozartean mezzo roles. Dressed boyishly in short pants and shirt, she was persuasive as a kid in desperate need of a timeout, but what one really wanted was to hear her sing some more. 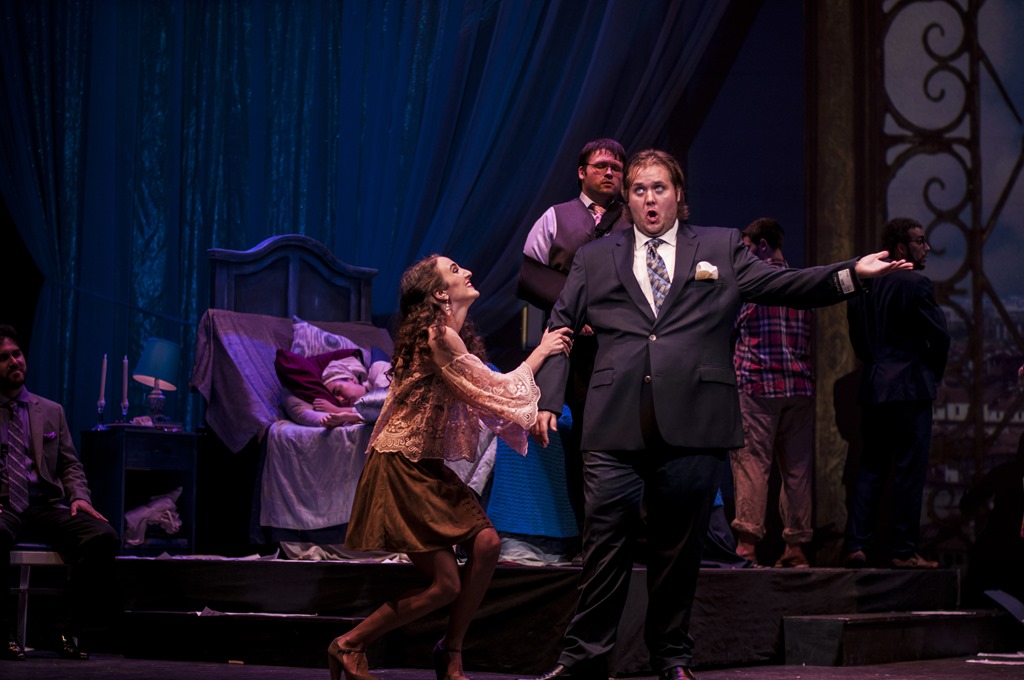 The Puccini on the second half had a much more experienced cast, and Toulson seemed to model his modern take on the opera’s original 13th-century setting very closely on Jack O’Brien’s celebrated 1950s-era mounting a few years back for the Metropolitan Opera.

Baritone Samuel Cotten had a strong stage presence as Schicchi, quickly dominating the proceedings as he showed up and clearly having a great time in this wonderful comic role. His voice was accurate and pleasant, but didn’t have much resonance or character. He seemed to be somewhat hoarse, and therefore might have been in less-than-stellar vocal trim for the show (he was not very effective as The Armchair in the Ravel), which is a hazard of the profession. But he made up for a lot of it with his strong acting, and it would certainly be worthwhile to see him again.

Tenor Judson Virden has one of those exciting spinto voices that makes the floridity of Puccini’s Rinuccio really stand out, and while he had a little trouble with his high B-flat in his ode to Florence, he sang with stamina and a real sense of Italian style. As Lauretta, soprano Maria Lacey has the big moment everybody knows with “O mio babbino caro,” which despite its naked sentimentality and over-familiarity can be seen in context to be perfectly suited to this character. Lacey has a strong and pretty voice, and she sang this popular aria with the right kind of sincerity to win over her indulgent father as well as strong applause in the house.

Bass-baritone Cory McGee as Simone offered a powerful, clarion voice in this small role, and there was also good singing to be had from Marina Renee Hogue as Nella and Kristin Fahning as La Ciesca. Luciana Pansa was a big-voiced, forceful Zita, though she seemed to be pushing it a little bit, probably as a consequence of a heavy hand on the character-portrayal throttle.

The production looked good, with Camilla Haith’s sharp costumes indicating character as well as time period, and Gathman’s orchestra was very fine. He directed his singers admirably well, no small feat for a very tricky score that demands lightness side by side with red-blooded Romanticism.

The Miami Music Festival presents the debut of its Wagner Institute next Saturday with a concert at the New World Center in Miami Beach featuring soprano Christine Goerke and baritone Alan Held. The program include scenes 1 and 2 of the third act of Die Walküre; five selections from Wagner operas includingTannhaüser, Das Rheingold, Die Walküre and Tristan und Isolde, and the Der Rosenkavalier Suite by Richard Strauss. The concert begins at 7:30 p.m. Visit miamimusicfestival.com for more details.

Film: Playwright August Wilson began his chronicle of the African-American experience throughout the … END_OF_DOCUMENT_TOKEN_TO_BE_REPLACED

Film: Just in time with the opening of movie theaters in Palm Beach County comes the season’s most … END_OF_DOCUMENT_TOKEN_TO_BE_REPLACED

Music: The very last concert Franz Joseph Haydn attended in his life was in March 1808, about a year … END_OF_DOCUMENT_TOKEN_TO_BE_REPLACED