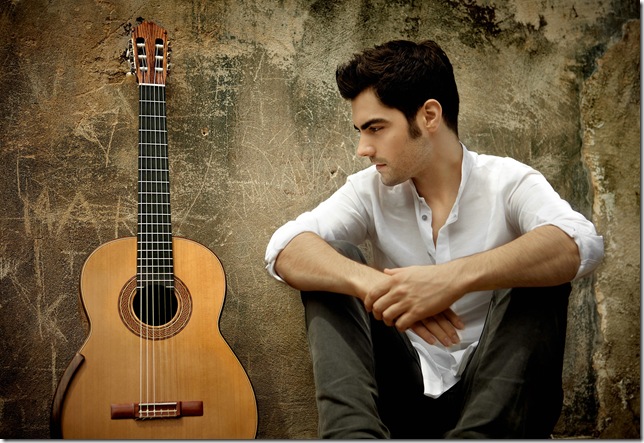 The Troubadour, with his slung guitar and singsong voice, came to Palm Beach last Thursday to the Crystal Room of Mar-a-Lago.

This time it was the handsome 30-year-old guitarist Miloš Karadaglić who gave the inaugural concert of the Chamber Music Society of Palm Beach’s Great Performers series, a newly formed cultural venture led by Michael Finn, formerly the executive director of the Palm Beach Symphony.

Miloš, as he likes to be known, didn’t sing, but he played his Greg Smallman guitar amazingly well and charmed the audience with self-deprecating remarks when introducing each piece owning that he’d never played in a “crystal chandelier room” before, which got a nervous laugh.

Last year, 3,000 heard his recital in London’s Royal Albert Hall. The Guardian newspaper commented on his ability to shrink the cavernous hall into an intimate space by force of personality. So it was when faced with 150 of Palm Beach Society’s well-dressed women and attractive men. “Is he the new Segovia?” I heard one say. “More Christopher Parkening,’’ came the reply.

Whatever the comparison, it is too early to tell how his musicianship will be judged. He sure helped get the new society’s concerts off to a good start in Donald Trump’s fantastic island fortress. Five concerts from the Chamber Music Society follow this one into 2014, all at Mar-a-Lago.

Saying he didn’t bring the rain from London, where he lives (it poured with rain outside), Karadaglic announced that his program was mostly by South American composers. “Some fast, some slow, some emotional,” he said.  His first piece, Danza Brasilera by Jorge Morel, showed his superb fast fingering. The second, Milonga, by Jorge Cardoso, was slow and enigmatic. The third, by Cuban composer Leo Brouwer, titled Un Dia di Noviembre, had hauntingly beautiful passages, and each closed with an extra high tweaked note, plucked lovingly by Karadaglić. Heads in the audience began to sway as he launched into a samba by Isaias Savio called Batucada; the rhythms were so captivating, no one could resist.

Emphasizing that he is a classical guitarist, he asked the audience if they knew a song about The Girl from Ipanema. Arranged specially for guitar, Antonio Carlos Jobim’s standard had no lasting appeal; frankly it came across as pretty dull. After his small attempt at jazz, Karadaglić moved into the popular Besame Mucho and Mas Que Nada. He poured deep feeling into the first, with strong emphasis on the melody. Mas Que Nada was not so familiar, but had wonderful syncopated moments on the guitar, superbly played.

Saving the best until last, Karadaglić described the Italian composer Carlo Domeniconi’s Koyunbaba Suite as a descriptive work in four movements about his homeland, Montenegro, geographically set between Bosnia and Albania, on the Adriatic Sea. In four movements, one hears the ocean beating against the rocks and the tranquility of the mountainous countryside, sheep tended by a boy shepherd and so on. Karadaglić’s ability to pick out a tune while all his other fingers are busy playing rushing chords and arpeggios is remarkable, done seemingly with such ease. In the quieter passages one could have heard a pin drop, so attentive was the audience for this young master guitarist.

Montenegro is full of talented young guitarists and violinists like Karadaglić. But for him to be singled out and accepted at London’s Royal Academy of Music at 16 is significant. He has continued to build a career of recitals around the world, and an upcoming recording with the London Philharmonic Orchestra of Rodrigo’s Concierto de Aranjuez and Fantasia para un Gentilhombre on the Deutsche Grammophon / Mercury Classic label, will be released next April.

I would have wished for a spotlight on his face, since the backlights of the stage cast him in shadow. And a handheld mic would have been useful for this soft-spoken troubadour, who, like all great artists, left his audience wanting more: No encores for this astute Montenegrin.

The next concert in the Great Performers series is set for Dec. 17 at Mar-a-Lago. Violinist Doori Na, cellist Joseph Lee and pianist Sean Kennard will perform music by Handel, Mendelssohn, Saint-Saëns and Ravel. The concert begins at 7 p.m. Tickets are $125, which includes cocktail reception. Call 561-379-6773 or visit www.cmspb.org.

Film: Playwright August Wilson began his chronicle of the African-American experience throughout the … END_OF_DOCUMENT_TOKEN_TO_BE_REPLACED

Film: Just in time with the opening of movie theaters in Palm Beach County comes the season’s most … END_OF_DOCUMENT_TOKEN_TO_BE_REPLACED

Music: The very last concert Franz Joseph Haydn attended in his life was in March 1808, about a year … END_OF_DOCUMENT_TOKEN_TO_BE_REPLACED