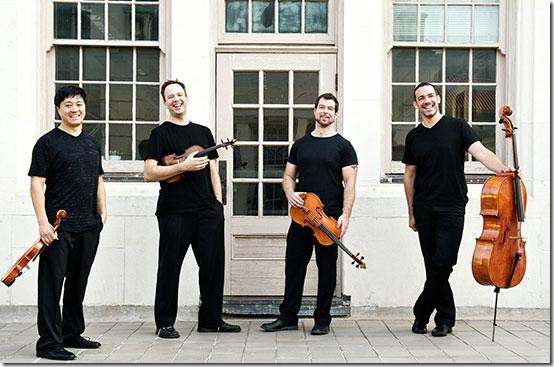 “I think we saved the best ’til last,” said Flagler Museum Director John Blades, at intermission of the Miró String Quartet’s concert Tuesday night, the final one of the season in the Flagler’s music series.

They had just played Franz Schubert’s Quartettsatz and the third Rasumovsky Quartet of Beethoven (Op. 59, No. 3, in C) and were impressive. Sentiment ran high at the end of the concert, too: “Can’t we have more?” said one elegant Palm Beacher. “The season will seem empty without them,” meaning the 14 years of well-established concerts at the Flagler.

Indeed, the Miró were the best American group I’ve heard there. They had energy to burn and played as if nothing else mattered but the music.

The Schubert Quartettsatz, one movement long, was written in 1820 and never finished. First performed in 1867, 40 years after his death, it has a stormy opening crescendo anchored by the seductive cello. Each instrument plays without pause or relief and with an intensity that takes listeners by surprise. It is so different from the Schubert of the lieder.

Shifting from major to minor and back again to major, it has a staggeringly difficult part for the first violin, which the Miró’s Daniel Ching shook off with the brilliance of a Menhuin. The excellence of the other three soloists was demonstrated, too, in this lively warm-up piece.

Introducing the Beethoven quartet, violist John Largess spoke clearly and distinctly of the composer’s established international reputation when he wrote it at the behest of Count Andrei Razumovsky, the Russian ambassador to Vienna in 1806. Again the lead violin, Ching, was heaven-sent, his bowing technique reminding one of a golfer at the first tee. His massive sweeps of the arm made the music sound terrific, played in the highest register of the violin.

The second movement opens with plucked cello strings, vibrantly played by the gifted Joshua Gindele. Ghostly sounds arise like themes for a haunted house, artistically tackled by these four superb players. Solos follow on the violin and then the cello in a languorous mood. Gloomy, sentinel-like statements seem to promise doom as the ending settles on A major.

The Minuet, third movement, has rhythmic tricks and though stately, at times, suggests a couple of cheeky peasants have interrupted the minuet to do a polka. Lastly, the Allegro molto, showed off the high energy of this foursome as they wrestled with a fugal sonata form. The opening attack was so fast it sounded like the wind swooshing through high slung electricity wires.

Schubert’s Death and the Maiden Quartet (No. 14 in D minor, D. 810) followed intermission. Written in 1826, two years before his all-too-early death at the age of only 31, Schubert reached back for this quartet to a lieder of the same name and used its theme. In the song, Death demands prenuptial rights, but the maiden begs to be left alone. At Schubert’s burial a small wind band played these variations.

The Allegro opens quietly and reverentially, as the lieder song dominates. The pianissimo section had beauty and warmth. And a nice balance was achieved as the Maiden escaped to a gallop, announced dramatically by all four players.

The second movement, Andante con moto, opens with a very familiar statement, but I felt it wasn’t too clearly delineated, getting lost in the brilliance of the quartet’s interpretation. The third, Scherzo, borrows from a Schubert German Dance (D. 790) and is fast and energetic with fine syncopated themes. The Presto has characteristics of the tarantella, with a lovely solo from second violinist William Fedkenheuer.

The Romantic mood of this movement is ever-present in one form or another as Schubert works tune after tune into the ground with repeat after repeat, and the odd sudden interjection. Big dynamic changes take over with long pauses as Schubert tries to find an ending by returning to the key of D minor and an unmistakable final chord.

The 100-plus attendees gave the Miró, who will record this work in April, a standing ovation. Surely they’ll replace the Tokyo String Quartet, who are retiring, as the best of the best in the eyes and ears of today’s concertgoers. They’re poised for the top spot.

Film: Playwright August Wilson began his chronicle of the African-American experience throughout the … END_OF_DOCUMENT_TOKEN_TO_BE_REPLACED

Film: Just in time with the opening of movie theaters in Palm Beach County comes the season’s most … END_OF_DOCUMENT_TOKEN_TO_BE_REPLACED

Music: The very last concert Franz Joseph Haydn attended in his life was in March 1808, about a year … END_OF_DOCUMENT_TOKEN_TO_BE_REPLACED