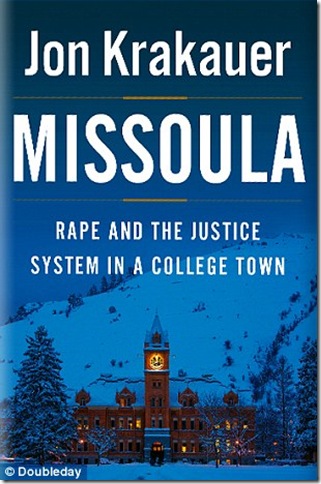 When Jon Krakauer decided to write about non-stranger rape, he was “stunned to discover that many of my acquaintances, and even several women in my own family, had been sexually assaulted by men they trusted. … I’d had no idea that rape was so prevalent.”

Missoula focuses on several University of Montana students who were raped by school football players.

Krakauer warns that some events in the book are “extremely disturbing” and may be difficult to read. In interviews and court testimony, young men admit to disrobing and assaulting female students who were asleep or drunk.

An estimated 85 percent of rapes are committed by men known to their victims, contrary to a common misconception that most rapes are by strangers lurking in dark alleyways. Only a small percentage of acquaintance rapes are successfully prosecuted. Even more unsettling is the finding that rapists tend to be repeat offenders.

Missoula has quickly climbed up the best-seller list, undoubtedly because of the author’s reputation as a popular non-fiction author of books such as Into the Wild and Into Thin Air.

Krakauer describes the long-term traumatic effects of rape on victims, who often are too frightened or ashamed to file a complaint with police or school officials. Victims commonly suffer from nightmares, depression, thoughts of suicide and flashbacks. One victim sat sobbing on her bathroom floor for hours on end.

Three years ago the U.S. Department of Justice announced that it was investigating 80 rape cases handled by Missoula police, prosecutors and the University of Montana. The resulting report sharply criticized the official response to rape allegations. Krakauer praises Missoula police for adopting a standard that now requires officers to believe victims as they begin their investigation. Police had often dismissed allegations or sided with the alleged assailant before having all the facts, which further traumatized victims.

Krakauer does not minimize the difficulty of determining who is telling the truth when rape is alleged. Where is the line between consensual and forced sex? An evening might begin with kissing and touching and end with the man demanding intercourse, even when the woman resists or says no.

When Cecilia Washburn (not her real name) kissed and frolicked with Jordan Johnson, the school’s star quarterback, she says she drew the line when he insisted on intercourse. Skeptics noted that she did not scream and even gave Johnson a ride home after their encounter. But that scenario is not uncommon. Women give in out of fear and shock. The university expelled Johnson, a decision that was later overturned. Police arrested Johnson, but a jury found him not guilty.

Just as rape can damage a victim for years, false charges can ruin a man’s reputation and lead to time in prison, but Krakauer says false claims constitute only a tiny fraction of rape allegations.

Much of the book consists of detailed descriptions of the legal system and how prosecutors, defense lawyers and juries respond to rape allegations. Long sections reproduce trial testimony, which are fascinating, but eventually tedious.

Federal officials estimate that close to 20 percent of American women have been raped. Most suffer in silence. Many fear the possibility of having to testify at trial, where defense lawyers can subject them to brutal interrogations. Many Missoula residents castigated the accusers and sided with the adored football players, known as the Grizzlies. Some people could not believe that a student-athlete might also be a serial rapist.

Rape remains the most underreported serious crime in the nation. More than 90 percent of rapists get away with it and are free to strike again.

Although it is a tough read, “Missoula” opens the door into a largely hidden world of sexual assaults and long-term trauma on college campuses.

Film: Playwright August Wilson began his chronicle of the African-American experience throughout the … END_OF_DOCUMENT_TOKEN_TO_BE_REPLACED

Film: Just in time with the opening of movie theaters in Palm Beach County comes the season’s most … END_OF_DOCUMENT_TOKEN_TO_BE_REPLACED

Music: The very last concert Franz Joseph Haydn attended in his life was in March 1808, about a year … END_OF_DOCUMENT_TOKEN_TO_BE_REPLACED