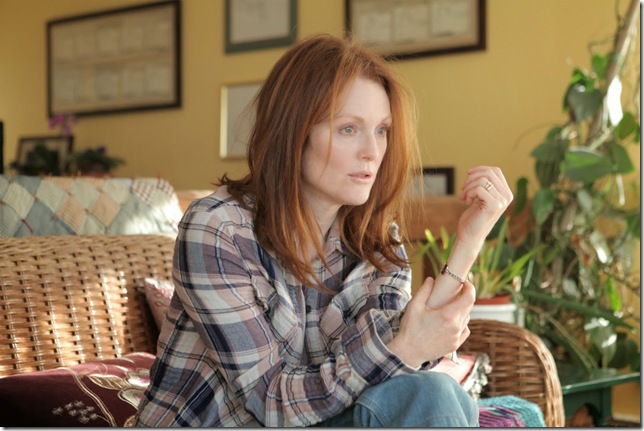 Still Alice is like one of those apocalyptic disas­­­­­ter movies, but more painful to watch.

Instead of gasping as extraterrestrial invaders decimate global landmarks in a hail of CGI, we watch in tear-stained horror as a human brain attacks itself, first targeting language, as words slip from the consciousness like fish through watery hands, then drilling into deeper areas of perception and communication. Soon enough, the disease has corroded the brain so thoroughly that everyday locations and even loved ones vanish from its memory.

The disease, of course, is early-onset Alzheimer’s, the character is Alice Howland, the source material is Lisa Genova’s 2007 best-seller, and the actress playing Alice is Julianne Moore, a presumptive Oscar favorite. The movie charts her incremental decline, from the first signs of a diagnosis toward an extreme from which we’d rather not imagine our loved ones suffering.

But we can’t help it; anyone who’s ever been a caregiver will be deluged by thoughts of their own family members driven helpless by their own bodies (or in this case, minds). It’s doubly heartbreaking to watch because of Alice’s atypically young age: It’s not just for seniors anymore. It could be any of us.

When we first meet Alice, she’s a linguistics professor at Columbia, struck by a case of mild aphasia while lecturing — a slip brushed off with a joke about having too much wine the night before. The irony of a professor of language losing her own vocabulary is a bit literal, but not implausible. At any rate, words and memories keep escaping, and it isn’t long before her neurologist has ruled out anything but Alzheimer’s.

Alice’s degeneration is deliberate and elliptical yet still feels immediate, and impossible to truly prepare for. Writer/directors Richard Glatzer and Wash Westmoreland don’t delineate time onscreen, but it seems that in less than a year, she’s unable to find her bathroom and remember her children’s names. “This is hell,” she eventually announces at a brave speech at an Alzheimer’s conference. “But it gets worse.”

The movie, however, isn’t hell, and it’s due largely to Moore, whose immersion into the role is a master class in acting, as admirable and triumphant as her character’s decline is sad and excruciating. She turns on a dime from fragility to rage, breaks down into sobs when she loses her way, and walks the gradually unfamiliar world like a veritable zombie, absent any studied actorly tricks that might have assured us, “I’m really OK, you know.”

It’s an incredibly reactive performance — reactive to the alternately patient and frustrated loved ones who surround her but also to herself, as Alice struggles not to vanish into the disease. She also seems to age about 10 years before our eyes.

We expected as much from Moore, given the persistent Oscar buzz, but as her husband John, Alec Baldwin surprises us with a display of nurturing sensitivity we don’t normally associate with his persona, and Kristen Stewart delivers a deeply moving performance as Alice’s partially estranged daughter Lydia, who finally grows closer to her mother during her illness (Lydia pursued a stage acting career over college, a frequent source of contention between parent and child, and the plays referenced in the movie — No Exit, Angels in America — are perhaps another sign of the screenwriters’ overly literal hand).

But, while it’s far from a slog, Still Alice is never an easy viewing. Such are the cases with films that pull no punches, and this is reason enough that it’s a far better movie than Cake. Delivered, instead, with a good physician’s lack of sugarcoating and sentiment, it feels like a manual for coping with Alzheimer’s — a guidebook that should be included in every information packet for every diagnosis of the disease, as a forecast for the troubles ahead.

Film: Playwright August Wilson began his chronicle of the African-American experience throughout the … END_OF_DOCUMENT_TOKEN_TO_BE_REPLACED

Film: Just in time with the opening of movie theaters in Palm Beach County comes the season’s most … END_OF_DOCUMENT_TOKEN_TO_BE_REPLACED

Music: The very last concert Franz Joseph Haydn attended in his life was in March 1808, about a year … END_OF_DOCUMENT_TOKEN_TO_BE_REPLACED