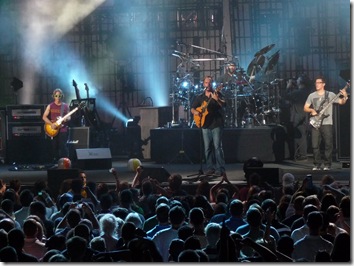 Not rain, nor heat, nor gloom of blight could deter the generation of ants that swarmed the mound at Cruzan Amphitheatre on Friday and Saturday night, their antennae homing lovingly on their “king.”

As he has for more than a decade, Dave Matthews ignored the early rain and the later steamy sweat that glistened on his face like royal jelly to make his annual proclamation that music can make the world better, for the ants, and for him and his band.

A trying year behind – Matthews was singing, sometimes screaming, that the show must go on: Without a keyboard player, without sax man LeRoi Moore. In May 2008, keyboardist Butch Taylor signed out for personal reasons. He said he wasn’t happy on the road and wanted to spend more time with his family. Unsaid: despite 10 years with the band, he was still only a “touring” member.

A month later, sax man and founding member LeRoi Moore broke several ribs and punctured a lung in an ATV crash on his farm in Virginia. After several days in the hospital, he returned to his home in Los Angeles to begin rehab. But on Aug. 19 he fell ill and died later that day. Cause of death: pneumonia. Jeff Coffin, saxophonist for Bela Fleck and the Flecktones, filled in for the remainder of the tour and remains with the band.

So, what’s it like without keyboards and with a new sax player?

Meet the new DMB, almost the same as the old DMB, just edgier. Throughout Friday’s set the band eschewed any softness of past years for more urgency, as if taking the Epicurean-like chorus from Ants Marching to heart:

Take these chances
Place them in a box until a quieter time
Lights down, you up and die

Matthews and his merry men began traveling new, unfamiliar ground. Their catharsis was to face reality, to deal with the losses – especially that of Moore – and move on. So they made a record.

Big Whiskey and the GrooGrux King is a tribute to Moore, and its third track, a rousing Funny the Way It Is, was Dave’s Friday opener. He followed with the older So Damn Lucky, then came back with the new Why I Am, “for the GrooGrux King.”

“I hope everybody is doing their thing,” Matthews intoned, as beachballs labored to stay airborne in the humidity. The crowd seemed to hang on the arrival of each number, bursting into Pavlovian cheers of recognition with each initial chord.

In the plaza, aromas of arepas blended with sausages and occasionally some herb, all washed down by vats of beer including Starr Hill, a new microbrew from Matthews’ home base of Charlottesville, Va. — $8 for a pint bottle, $10 for a large draft. Add food costs to ticket prices that soared past $100 and fans obviously were willing to sacrifice. But they did enjoy some return on their investment.

As the breeze came up and the air cooled, “touring members” Coffin, guitarist Tim Reynolds and trumpeter Rashawn Ross (who may be the largest musician on tour, anywhere), began to heat up, paying homage to Moore while setting their own course. Nowhere was the new vibe better displayed than on Jimi Thing, Shake Me Like a Monkey and No. 41, jumping from jazzy to bluesy to soulful to raga-esque to hippity-hoppity. 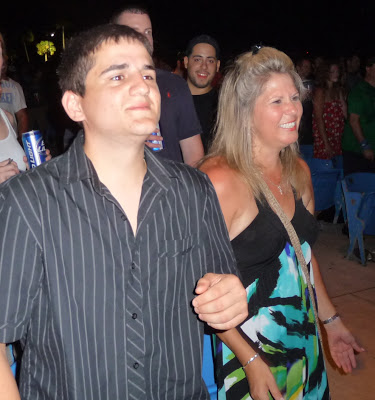 “Best I’ve seen ’em this year,” said Rocco Nigro, a DMB devotee from Matawan, N.J. Taking in his ninth show this year, 22nd all time. “In April I saw them at the Izod Center (in the Meadowlands) and they were still getting over LeRoi dying; now they’re into it.”

Joining Nigro at Cruzan Amphitheatre for the second year was his mother Bernardine. “It’s a bonding thing,” she said. “I love ’em, too!”

Typical of many DMB fans, they just want to hear the music. A few, of course, are never happy, and thanks to cell phones they have a new weapon: All night long, the receptionist in the amphitheater office fielded calls from patrons on the lawn complaining about the sound.

“We’re trying to fix it,” she patiently told them, recognizing many caller IDs from previous concerts. Tech checks, however, uncovered no problems. As one fan noted, “It’s OK, just not loud enough.”

Others weren’t happy because he did not do standards, such as the most-played Ants Marching (excerpted in this review), Watchtower and Satellite. He did do Crash Into Me, a rousing Burning Down the House and Dancing Nancies, but some people want blood. After all, they had three hours.

Honestly, toward the end, Dave looked weary, and kept fans waiting more than five screaming, stomping, clapping minutes before returning to do Sister, a tease of Little Thing and finally Grey Street.

Friday’s show drew a 3 1/2-star rating from Web-based critics, but the anticipation of a two-week break before the Outside Lands Festival in San Francisco must have provided inspiration for Saturday’s show, which topped out at 5 stars.

Thom Smith is a freelance writer based in South Florida.

Music: The very last concert Franz Joseph Haydn attended in his life was in March 1808, about a year … END_OF_DOCUMENT_TOKEN_TO_BE_REPLACED

Film: Major League Baseball culminates each season with the World Series, but to find the true … END_OF_DOCUMENT_TOKEN_TO_BE_REPLACED