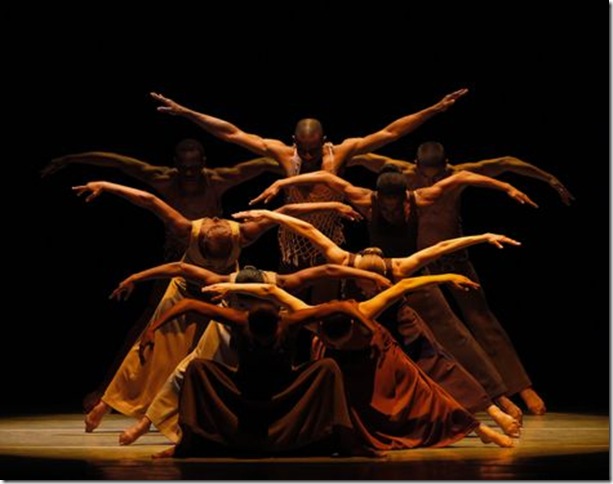 The dancers of the Alvin Ailey American Dance Theatre were on full throttle as they worked the crowd at the Kravis Center on Monday night with a seasoned and savvy flair.

The program, of course, included the infectious Revelations, which is Alvin Ailey’s most well-known work. Even after 50 years of regularly closing the show, this signature work managed to win the audience over in a really big way, but also in a real way.

Revelations is an undeniably successful work that has had the same effect on audiences the world over. People can hardly wait for it to be performed and when it is over, the audience always goes wild.

It is performed in three sections, starting quietly in Pilgrim of Sorrow, building into a raucous finale to the gospel singing of Rocks My Soul in the Bosom of Abraham.

A little of this and a little of that, but all wonderfully vintage Ailey, with its deep roots in the modern dance technique of Lester Horton.

But it was Ohad Naharin’s Minus 16, which was first on the program, that really rocked. It began before the audience was seated as a lone male dancer moved to the soft sound of jazz on an unlit stage in the most beguiling way. Samuel Lee Roberts was totally mesmerizing as he mused around the stage, moving and grooving, as if he didn’t have a bone in his body. This preamble was an introduction to the Gaga technique that the dancers needed to embrace in order to work with the Israeli choreographer.

Naharin wanted the dancers to go to another place when they danced his movement. Through improvisation and by covering mirrors (dancers traditionally train and rehearse looking and assessing their image in mirrors), they discovered a new way to move. Naharin wanted the dancers to experience what if feels like to dance rather than what if looks like. 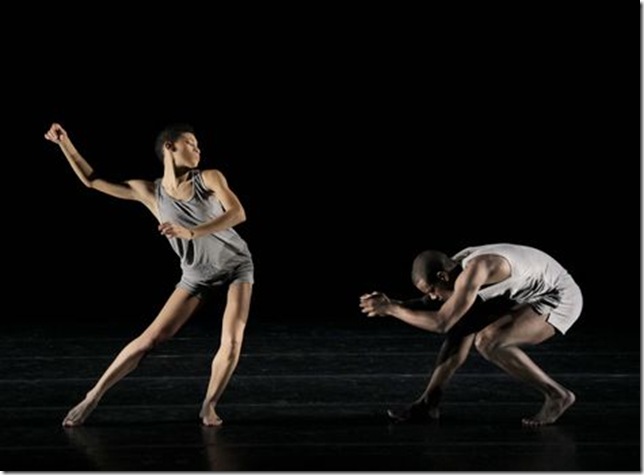 With his improvisational process, a very different way of moving was released in the Ailey dancers and it showed in Minus 16, which was explosive and bold, giving the program a more contemporary and edgy look.

In the first section of the work, which is composed of various excerpts from other Naharin works, 20 dancers sit on chairs in androgynous pants and jackets à la Rachel Maddow. We hear in a narrative that that there is a fine line between elegance and fatigue. The dancers, seated in a large semi-circle, exploded into a series of peculiar movements that culminated in a canon of 19 bodies standing and then percussively arching back as if they were shot by a firing squad while only the last one fell forward.

The pumped-up music is derived from a traditional Passover song with verses that the dancers loudly recited, sounding more like some kind of tribal chant. Though the cycle was repeated many times (and each time was equally explosive), we craved to see it repeated again and again. After each cycle, the dancers, except for the last one, removed and flung the same article of clothing into a heap in the center till they were left dressed only in gray, loose underwear.

There was a poignant duet, sensitively danced by Ghrai De Vore and Kirven Douthit-Boyd to music by Vivaldi, which was dedicated to the memory of Naharin’s wife, Mari Kajiwara, a former Ailey dancer. It was beautiful with its unusual imagery of a couple’s relationship; the man gently banging his head on the woman’s chest, the shaking of hands in a fervent prayer gesture, and an amputated hop on one leg when away from each other.

Then the dancers came out into the house and chose audience members to come onstage to dance with them. It was an abrupt change that altered not only the mood but the tempo of the work. Though it was somewhat interesting to watch the juxtaposition of the calm, continuous performance of the dancers as they maneuvered the clueless participants around while maintaining a semblance of structured choreography, it was a dynamic letdown.

Inserted in the middle of the program was Takademe, a solo choreographed by the company’s artistic director Robert Battle and danced beautifully by Douthit-Boyd. Bare-chested in fabulous red pants, Douthit-Boyd was fluid and articulate in his intricate body isolations.

Battle took the reins of Alvin Ailey American Dance Theatre fairly recently and has already injected new life into the repertory of the company by selecting stimulating new choreography by exciting new choreographers. This process is redefining the company and giving it a more edgy look while still preserving what the Ailey company is so successful at doing.

The company is gorgeous. The dancers are excellent performers and technicians and seem to relish the challenges that the new repertory gives them. They still maintain their uniqueness as they serve up their powerful ensemble energy, which is deeply rooted in classic modern dance technique.

Film: Playwright August Wilson began his chronicle of the African-American experience throughout the … END_OF_DOCUMENT_TOKEN_TO_BE_REPLACED

Film: Just in time with the opening of movie theaters in Palm Beach County comes the season’s most … END_OF_DOCUMENT_TOKEN_TO_BE_REPLACED

Music: The very last concert Franz Joseph Haydn attended in his life was in March 1808, about a year … END_OF_DOCUMENT_TOKEN_TO_BE_REPLACED