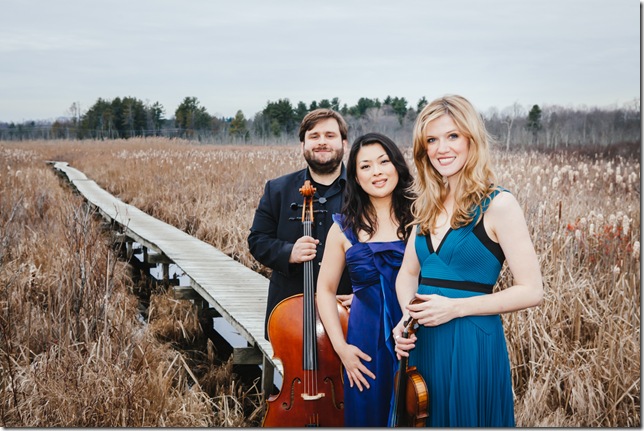 On Feb. 9, the Neave Trio played an historic concert at the Henry Morrison Flagler Museum as part of the museum’s 2016 Music Series. The occasion was marked by the return of the original Steinway grand piano Flagler bought for his wife, after it had been sold in the 1920s when the Whitehall estate was converted to a hotel.

The concert opened with a warm introduction by violinist Anna Williams, creating a welcome connection between the trio and the audience. After her remarks, the trio launched into Erich Wolfgang Korngold’s Piano Trio in D major, Op. 1. The piece is remarkable, mostly in that it was finished when Korngold was only 13 years old. Other than being slightly fragmented in its construction, it shows few signs of its creator’s youth. In the first movement, there are near-instant changes in color between phrases. The players of the Neave Trio were able to take those turns on a dime.

The second movement was a wonderful balance of tonal shifts on Korngold’s part. His harmonic changes are so rapid that we are rarely in a stable key, but he drops just enough breadcrumbs so that we do not get lost. It is as if the listener is getting musically dizzy, in the most fun way imaginable. Helping set this tone were a combination of light piano playing and string pizzicato or plucking that rang well in the hall.

The third movement opened with a gorgeous, lyrical melody from cellist Mikhail Veselov. By any measure, this is expressive music with a great deal of depth. That it came from a composer who was barely a teenager only indicates his greatness to follow.

The finale of this piece was light, expressive, rich, and a lot of fun. Although the ensemble’s balance was on point through the entire concert, here the violin and cello seemed to blend especially well.

The only regret of this piece was the sense of apology that came with it after the intermission. The host of the event, as well as violinist Williams, seemed to imply that the Korngold was perhaps a bit challenging for listeners. I vehemently disagree. That Korngold went on to become perhaps the best Hollywood film composer of all time speaks to his accessibility.

The second half of the concert featured the Piano Trio No. 3 (in F minor, Op. 65, B. 130), by famed Czech composer Antonin Dvořák. This was an interesting choice to pair with the Korngold, in that the two create artistic bookends in a way. Korngold was a child when he wrote his first piano trio. Dvořák, in writing his third, was specifically aiming to write something more mature and substantial than his earlier works.

There are moments in the second and third movements, albeit brief, that almost sound like minimalist music from the 1970s, or even pop music à la Coldplay from the early 2000s. Some of this speaks to Dvořák, but some of it also speaks to the youth and energy of this particular ensemble.

For an encore, the trio performed the “Spring” movement from Astor Piazolla’s Four Seasons of Buenos Aires. This light, fun work was a great palate cleanser after the heavier and dramatic Dvořák trio.

The Neave ensemble, with their polished and energetic sound seemed like a perfect fit to debut the new/old piano at Whitehall. The piano, whose intimate sound fit the space well, is set to be restored in the coming months for future performances in the Flagler Music Series.

According to their bio, the trio gets their name from the Gaelic word “neave,” meaning bright and radiant. Whether their name or their sound came first, it seems an appropriate fit.

Film: Playwright August Wilson began his chronicle of the African-American experience throughout the … END_OF_DOCUMENT_TOKEN_TO_BE_REPLACED

Film: Just in time with the opening of movie theaters in Palm Beach County comes the season’s most … END_OF_DOCUMENT_TOKEN_TO_BE_REPLACED

Music: The very last concert Franz Joseph Haydn attended in his life was in March 1808, about a year … END_OF_DOCUMENT_TOKEN_TO_BE_REPLACED