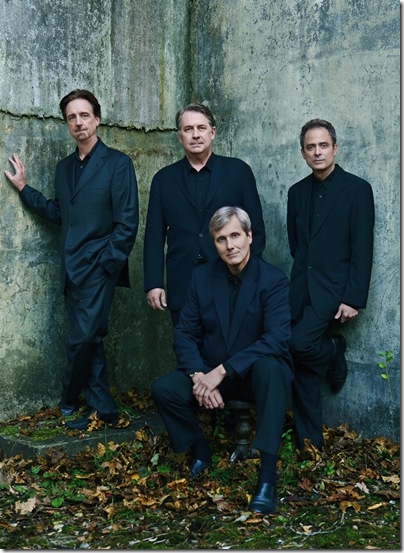 They stand to play, all except for cellist David Finckel.

In that, they were just like the youngsters from Palm Springs Middle School who serenaded concertgoers with Christmas carols in the lobby of the Kravis Center on Wednesday night. But there the comparisons end.

The four inside the hall were the Emerson String Quartet, who have been together for 35 years. They still sound fresh; their attacks, energy and playing are superb and wonderfully refined.

Their first offering was Haydn’s String Quartet No. 67 (in F, Hob. III: 82). Written in 1799, it was commissioned by Prince von Lobkowitz, the same man who also gave Beethoven his first attempt at writing for string quartet.

The Allegro of the Haydn begins slowly with the first violin leading, and the second movement is a fast scherzo with humorous twists in which tunes seemingly stop halfway through.

The Andante of the third movement has strings playing in pairs and trios with some remarkably skillful obbligato playing by first violinist Eugene Drucker. He was amazing. The spirited finale dances along with glee, and showed Haydn at his best.

It must be said that Monday night’s audience insisted on applauding between movements, a bad habit that breaks concentration and which the players received with good grace. A reluctant half-smile from the lead violinist spoke volumes.

Next followed a new work, Thomas Adès’ String Quartet No. 2, called The Four Quarters. Commissioned for the Emersons by Carnegie Hall, this was its Florida premiere. Adès, a 40-year-old English composer, is very much on the rise in music circles who praise his works enthusiastically.

This quartet straddles a day in the life of its author from sunrise to sundown. It’s in stark contrast to the Haydn, with dissonances and strong reminders of Alban Berg, even Schoenberg.

“Nightfall,” the first movement, starts with the violins and viola sounding like glittering stars in the heavens, underlaid with deep cello bass notes. One is able to follow Adès’ melodic line on the first violin, this time played by Philip Setzer, but the tune goes nowhere, tapering off without resolve. Surging toward “anxious screams” on the violins and more dissonances, “Nightfall” ends on a single note from the lead violin.

Two minutes of brilliant pizzicato playing open the second movement, “Morning Dew,” followed by some tuneful passages, broken later by more catchy and beautiful pizzicatos, as at the start, at times sounding like hitting one’s tongue against the roof of one’s mouth to make a clicking sound.

A repeated monotone opens the third movement, “Days,” getting persistently louder and louder, around which the violins and viola play melodies of a semi-tuneful nature. Now, all four players repeat the surging monotone until it becomes almost unbearable. It is amazing what volume the Emersons can produce when playing in unison. Parts reminded me of Bernard Herrmann’s music for Hitchcock’s Psycho.

The last movement, “The Twenty-fifth Hour,” begins with a lilting phrase accompanied by plucked strings on the cello. Unfortunately, Finckel’s cello, which was mounted on a rostrum, sounded twangy and sometimes out of balance with the other three instruments. When plucked, it almost sounded vulgar; perhaps a hollow rostrum was to blame.

The finale, a sweet threnody that emerges after the din of the third movement, lurches forward with every bar, no ending in sight. But it has warmth and satisfaction. Slow, tapering, falling chords bring Adès Four Quarters to a close. The silence that followed was unbroken by applause for at least 20 seconds. Thomas Adès has given his audiences much to think about. Surely it will grow on them with additional hearings.

The evening ended with Beethoven’s 14th string quartet (in C-sharp minor, Op. 131). With seven unbroken movements, played without pause, it rolls along at a fast pace, making Adès’ thrilling new work seem not so remote, since so many of Beethoven’s ideas, composed in 1826, are not that different from what the English composer was trying to express in his quartet.

Finckel did splendid work anchoring the Beethoven, and kudos also to the dapper Lawrence Dutton for his immaculate viola playing. Sadly, the audience was lukewarm in its reception of these four brilliant instrumentalists at the end of each work.

It’s a pity, because they deserved far better. There were a lot of empty seats Wednesday night, so perhaps string quartets had little appeal for this crowd.

Film: Playwright August Wilson began his chronicle of the African-American experience throughout the … END_OF_DOCUMENT_TOKEN_TO_BE_REPLACED

Film: Just in time with the opening of movie theaters in Palm Beach County comes the season’s most … END_OF_DOCUMENT_TOKEN_TO_BE_REPLACED

Music: The very last concert Franz Joseph Haydn attended in his life was in March 1808, about a year … END_OF_DOCUMENT_TOKEN_TO_BE_REPLACED