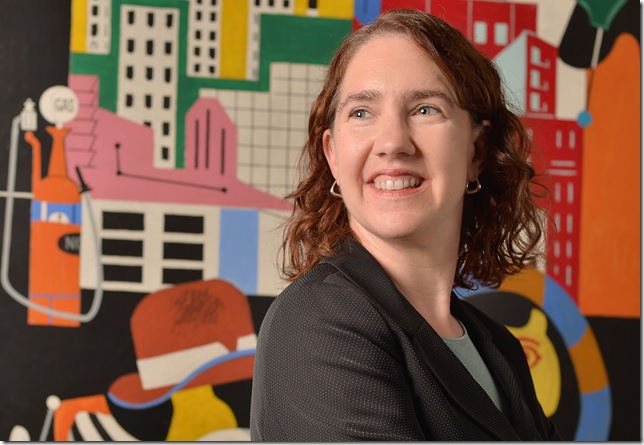 “I like to put things in a historical context. I think like my father,” said Ellen Roberts, the new Harold and Anne Berkley Smith Curator of American Art at the Norton Museum of Art, about why she loves being a curator. “He’s a 20th-century European intellectual historian.”

This kind of thinking will help in her new post, where she’ll document and educate the public and organize exhibits about the nearly 1,000 paintings, sculptures and works on paper that comprise the museum’s pre-1945 American art collection. Touring with her through the galleries that are now her purview, it was evident she already knew the collection, though she’d only been there two weeks.

In the Leonard and Sophie Davis Gallery that holds the Norton’s earliest American works, a striking Gilbert Stuart portrait, William Burton Conyngham (c. 1790), beckoned from the left. Roberts, however, moved towards two portraits on the right.

“I love the Henris,” she said. “He had the nerve to paint people that weren’t high society and to give them dignity.” The two portraits by Robert Henri were Anita Martinez (1924) and Sonny Mac (1926). The first was a dark and mysterious woman, and the other was an adolescent boy with protruding gapped front teeth. 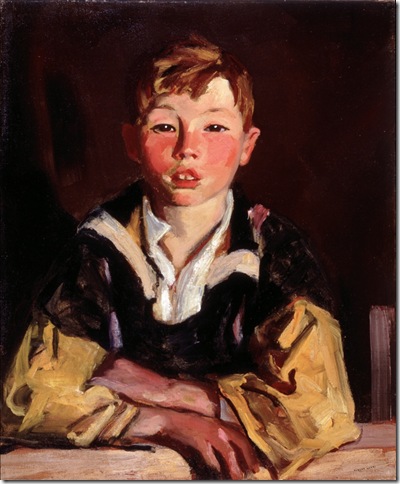 “If you think of traditional portraiture, you don’t usually see teeth, but urban realists like Henri painted people more informally,” she said. Neither portrait was flattering, but the subjects were relatable, unlike Gilbert’s idealized politician. The brushstrokes and light-infused palette evoked Mary Cassatt and John Singer Sargent, but Roberts pointed out that Sargent’s focus was not so gritty. She also alluded to Henri’s “roots in French impressionism like Degas or Manet,” by comparison to Childe Hassam, whose landscape hung at the other end of the gallery. “He’d be looking more at Monet.”

Museum founder Ralph Norton mostly collected the contemporary art of his time, the early 20th century. “It’s remarkable that Norton bought so consistently in that area,” Roberts said. “But later when he realized he was going to start a museum he started collecting some equally impressive 19th-century work.”

Hope Alswang, the museum’s executive director and CEO, has asked Roberts to research Norton with the goal of writing a book and to survey the entire collection in accession order. “This way I can see how it was shaped over time,” she said. She’ll also identify gaps in the 19th-century collection as part of the museum’s long-term acquisition planning.

Space is a challenge, though, as even now there are a number of important works on paper in storage, including Winslow Homer’s The Hudson River at Blue Ledge, Essex County (The Log Jam) (1889), John Marin’s Franconia Notch― Rain and Mist (1927) and Charles Demuth’s Eggplant, Carrots, and Tomatoes (1927).

“Now we’re moving into American modernism,” Roberts noted, entering the Trust Family Gallery and standing near three Georgia O’Keefe paintings. “These artists are often called the Stieglitz Circle,” she said referencing O’Keefe’s husband, photographer Alfred Stieglitz. She’d like to help visitors understand the connections between the artists. “I’d like to create groupings with text so that people can see the personal relationships,” she said. 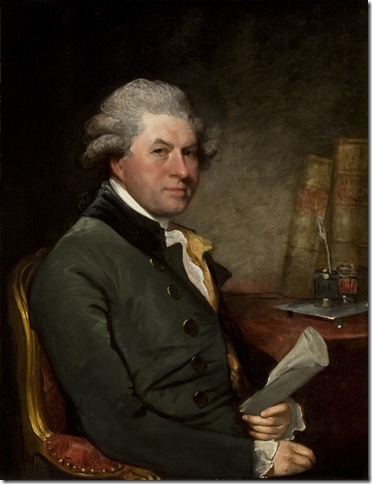 From there, Roberts passed into a “pocket,” or corridor gallery, where Roberts pointed to Neapolitan Pie (1963) by Wayne Thiebaud, a recent gift from Anne Smith, who with her husband Harold funded Roberts’ post. “It’s a smaller picture, but it’s got such power,” she observed.

Although the Thiebaud work is post-1945, Roberts explained that there will be overlap between her and Cheryl Brutvan, director of curatorial affairs and curator of contemporary art. Traditionally, modern art ends and contemporary art begins in 1960, but Roberts thinks that eventually her field will extend to 1960. “Cheryl and I will work together on that period between 1945 and 1960,” she said.

Brutvan and Roberts met when they both worked at the Museum of Fine Arts in Boston, where Roberts, who is 39, went after she graduated from Boston University with both her master’s and a Ph.D in art history. She has her bachelor’s from Yale. In graduate school she focused on American art and minored in Asian studies, specifically, the effect of the Japanese Edo period (1615-1868) on Western art.

Prior to joining the Norton, Roberts was an associate curator of American art at the Art Institute of Chicago. “It was a great learning opportunity, but here I can do more to build the collection,” she said.

As she moved into the Lorraine and Jack N. Friedman Gallery at the end of the tour, Roberts said she’d just reinstalled important works there from galleries being used for an upcoming exhibit of work by photographer Annie Leibovitz. She paused in front of Edward Hopper’s August in the City (1945) that she’d placed beside Charles Sheeler’s Shadow and Substance (1950) — a thought-provoking juxtaposition.

“They’re both about light,” she explained. “But while Hopper is about natural or sunlight, it’s almost like Sheeler has vacuumed out the light.”

All the connections and contrasts Roberts made demonstrated a fresh perspective. She intends to help visitors understand that American art didn’t always progress in a cut-and-dried chronology from one period to the next. Some artists that worked in abstraction eventually returned to figuration, she said.

“We have this idea of American art going forward in one direction, but it’s actually more complicated. There are lots of exceptions along the way,” she said.

The Norton Museum of Art is open Tuesday, Wednesday, Friday and Saturday from 10 am until 5 pm, Thursdays from 10 am until 9 pm, and Sunday from 1 pm until 5 pm. Admission is $12 for adults, $5 for visitors aged 2 through 13, and free for children under 13. Palm Beach County residents receive free museum admission on the first Saturday of each month. For more information, call 561-832-5196, or visit www.norton.org.

Film: Playwright August Wilson began his chronicle of the African-American experience throughout the … END_OF_DOCUMENT_TOKEN_TO_BE_REPLACED

Film: Just in time with the opening of movie theaters in Palm Beach County comes the season’s most … END_OF_DOCUMENT_TOKEN_TO_BE_REPLACED

Music: The very last concert Franz Joseph Haydn attended in his life was in March 1808, about a year … END_OF_DOCUMENT_TOKEN_TO_BE_REPLACED