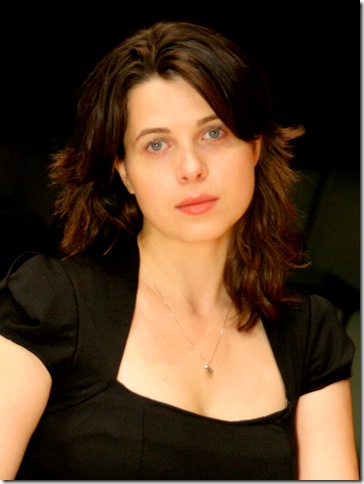 It could be that the audience at the University of Miami’s Gusman Hall on Sunday afternoon was witness to the birth of a musical organization that will take South Florida into the kind of direction only the New World Symphony has gone heretofore.

And it may be too early to tell. But the event, ostensibly the closing day of the 20th Mainly Mozart Festival, inaugurated a concert model that was technologically adept and cannily broad-minded about what a chamber music program should be all about. That included dance, because the Miami Chamber Music Society’s first concert, which this was, ended with the premiere of an engaging new ballet by a talented dancer-choreographer from the Miami City Ballet.

It took programming guts to put all that together, but it was done brilliantly, and it says much about the sophistication of Miami’s cultural environment that all the concert’s innovation and boldness seemed so perfectly normal.

The Society, formed by famed Coral Gables product-liability attorney Mike Eidson and Ukranian-American pianist Marina Radiushina, promises to present a dozen to 14 concerts in the coming season, some of them at out-of-the-ordinary venues, as well as organizing the Mainly Mozart Festival it now controls. The handoff Sunday afternoon of the Mainly Mozart Festival from the Miami Music Project, which has operated it for three years, was gracefully done in remarks before the concert by project executive director Anna Klimala-Pietraszko, who handed a symbolic conductor’s baton to Radiushina.

Radiushina, the pianist for the concert, was joined by violinist Eli Matthews of the Cleveland Orchestra and the exciting young cellist Joshua Roman in a program almost entirely of 20th-century music, with the sole exception of a late piano trio by Mozart. Each piece was introduced in video program notes by the longtime UM musicology professor Frank Cooper (who founded Mainly Mozart with George Volsky).

These were very evocative little films, and the commentary, drawing on the theme of “creativity,” was memorable and powerful. They were not simply slides of photos, either; the crafters of the video, assisted by documentarian Ali Habashi, who was in the house filming the proceedings, uncovered video of Arvo Pärt demonstrating how two voices come together from neutrality to meaning, historic footage of World War I fighting and the exuberant parties of the Jazz Age, and supplied ample quotes from the composers themselves. I found that they added a good deal of contextual awareness that made the music even more interesting. 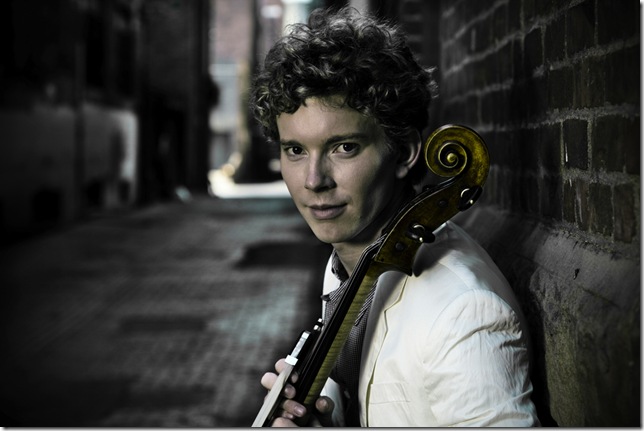 But after all, the music was the main thing, and it couldn’t have worked without excellent performances. Fortunately, all three of these musicians are first-rate players, and in addition to hearing them as a trio, the concert presented the string players in solo work. Roman opened the afternoon with a hair-raising version of the second movement (Presto) from Russian composer Alfred Schnittke’s First Cello Sonata, composed in 1978. It begins with a blizzard of ghostly non-stop racing figures on the cello before the piano begins to enter with low-register hammerblows. Like much of Schnittke’s work, it rises to a point of enormous volume and gigantic chords in which the composer seems to want every note of the piano played at once. Roman played his difficult part with seeming nonchalance, and Radiushina was more than equal to the piano part’s heroic demands.

Quite good Schnittke, in other words, followed by another piece from that same year, Pärt’s Spiegel im Spiegel, a minimalist classic that has done repeat duty for moments of emotional significance in television shows and movies. The soloist, Matthews, entered after Radiushina’s repeated broken F-major triads with his initial notes, playing them so quietly they were literally inaudible; a bit more presence would have worked just as well. The tempo here was somewhat faster than you usually hear it, but very effective, and Matthews played with beauty and sweetness.

The three musicians closed the first half with an excellent, muscular reading of the Piano Trio in C (K. 548) of Mozart. They played the first movement with bigness and strength, and a laudable unity; there was a very impressive sudden diminuendo toward the end that added a real sense of surprise. Roman’s solo work in the slow movement marked the first time so far he’d been able to present his feeling for long-breathed melodic line, and he did so with great loveliness. The finale was appropriately impish and high-spirited, with all three players tossing off their various flourishes easily. 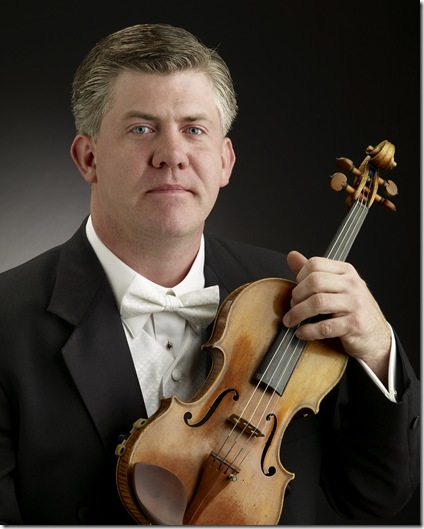 The music of Leoš Janáček opened the second half, with Matthews playing a miniature arranged from one of the composer’s piano pieces in the On an Overgrown Path collection. This beautiful little piece, Listek odvanuty (A Leaf Blown Away), is clearly close to the heart of Matthews, who played it with great feeling and warmth. He followed that with the Janáček Violin Sonata, a masterpiece of a very different kind, experimental and highly dramatic.

This was a reading of the work that was softer around the edges than it might have been; the emphasis was more on melodic fullness than emotional intensity. That said, it was an impressive performance, with another demonstration in the second movement of Matthews’ ability to play quietly, and in the final movement, a palpable sense of unrest and mystery.

Roman returned to the stage for three of the Seven Popular Spanish Songs of Manuel de Falla, in the Maurice Maréchal arrangement known as Suite Populaire Espagnole. Here was another chance to hear Roman’s beautiful tone and sensitive musicianship, particularly in Nana, the opening lullaby. That was followed by Asturiana, in which he further showed a nobility of sound in the tradition of his mentor, Yo-Yo Ma, and then unleashed a host of fireworks for the concluding Polo. Roman is an exciting and hugely accomplished player, and one hopes to see him again in the coming season.

The three teamed up again for the final piece on the program, Paul Schoenfield’s Café Music, but the chief interest was taken by six members of the Miami City Ballet, who danced a new work created for this concert by a fellow member of the corps, Adriana Pierce. Café Music is in three parts, and Pierce has set them with variety, energy and taste. Three couples — Ashley Knox and Andrei Chagas, Emily Bromberg and Renan Cerdeiro, and Sara Esty and Neil Marshall — dressed in casual style (men in red shirts and black leggings, women in black dresses with white leggings), paired off charmingly in the first movement , coming from three chairs to the back and side of the special floor laid down over the Gusman stage. 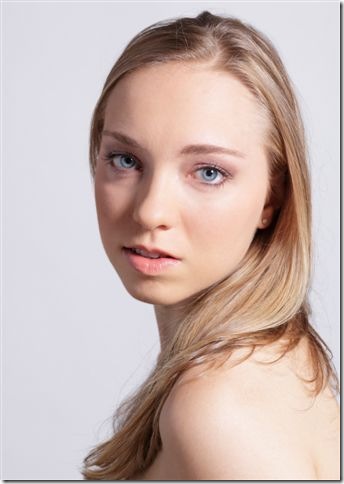 Schoenfield’s music is a clever pastiche of older musical styles, particulary early jazz, and Pierce’s choreography reflected in its dance vocabulary the same kind of stylistic multitasking. The subject of the ballet is romance, and the second movement (Andante moderato), a sweet, melancholy song, was a pas de deux for Bromberg and Cerdeiro. This was a surpassingly lovely piece of dance, with Bromberg essentially playing hard to get and Cerdeiro the lovelorn swain. But it had more honesty than that description of a well-worn trope would suggest: the movements were athletic and intimate, with the two dancers repeatedly facing each other very closely as the erotic tension mounted.

The finale (Presto) brought all six dancers back together, and here the stylistic mashup was dizzying. Amid the general jazz dance of the movement, there were tantalizing bits and pieces of other things: one couple did a fun, fanny-wagging shimmy, and all six got together for a few moments of what looked like square dancing. It mirrored the music ideally, and it had a sense of joyous, confident motion. The six dancers were splendid, and indeed they would have to have been to have pulled off a ballet that mixes so many styles so rapidly.

The audience, filled almost to its 600-seat capacity, roared its approval of the ballet, and surely the musicians, too, who played this very difficult work spotlessly. For an encore, the three performed the Spring movement from Astor Piazzolla’s Four Seasons of Buenos Aires, ending a long but important concert.

This was a remarkable and fulfilling artistic event that could easily have tripped itself up with technical malfunctions or signs of weak preparation, indicating a desire to focus only on the highlights and let the rest be chalked up to good will. They could have done it that way, and perhaps few would have minded. But that this new Society worked hard to make every part of it as good as they could make it tells us that these are serious people who want to make a lasting contribution to the South Florida arts.

Subsequent concerts won’t have all the features of this one, but by showing what they could do, and knowing that its audience would follow them, the Miami Chamber Music Society has drawn the before-and-after line in the chamber music sand. If they’re able to keep things at this level, future arts aficionados may point to the founding of this group as a crucial event in the elevation of Miami into a world-class arts city.

Film: Playwright August Wilson began his chronicle of the African-American experience throughout the … END_OF_DOCUMENT_TOKEN_TO_BE_REPLACED

Film: Just in time with the opening of movie theaters in Palm Beach County comes the season’s most … END_OF_DOCUMENT_TOKEN_TO_BE_REPLACED

Music: The very last concert Franz Joseph Haydn attended in his life was in March 1808, about a year … END_OF_DOCUMENT_TOKEN_TO_BE_REPLACED