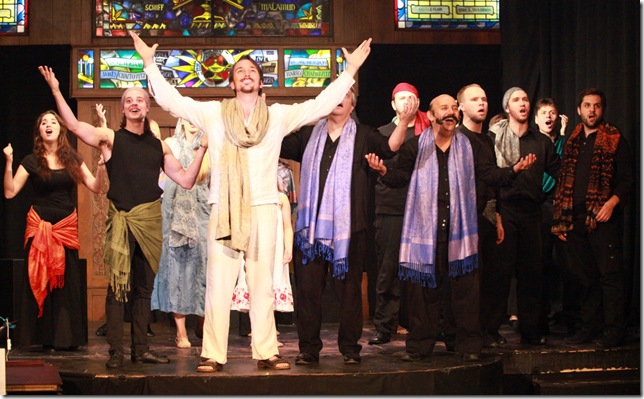 Monday evening, Boca Raton’s Wick Theatre takes its first plunge into the risky waters of new work, putting its usual menu of classic musicals on hold for a one-night concert of a show with aspirations of Broadway, Song of Solomon.

If it goes well, look for it to return for a fully staged run this summer, prior to a move to New York.

Yes, Solomon is Biblical King Solomon. The musical centers on an orphan girl in ancient Israel who captures his heart with her beauty, intelligence and candor, leading to a conflict over whether the ruler will choose love over politics.

Written by Andrew Beall and Neil Van Leeuwen, veteran Broadway musicians who are making their debuts as theatrical collaborators, Song of Solomon has its roots in an eight-year-old composition for marimba and voice called Song of Alma, based loosely on the Solomon tale.

When Beall came down to perform it with the South Florida Symphony and needed a marimba, he was introduced to Delray Beach percussionist and music teacher Drew Tucker. They became fast friends and now Tucker is a co-producer of Song of Solomon.

“Through our friendship, I said, ‘Listen, I want to be a part of this’,” recalls Tucker. “Through my time in the non-profit world, the fundraising sphere, I had developed a lot of connections and I said, ‘This kind of show would be amazing in Florida, especially Palm Beach County, so let’s make this thing happen.’ I wasn’t even thinking of Broadway at that point.”

But as the work blossomed into a musical and received enthusiastic audience responses at earlier concert presentations, the creative team began aiming for New York. “Really all it takes is money,” says Tucker, who estimates a Broadway production would cost $13 million. He is not fazed by the hurdle of raising that amount. “The project is something people have found themselves really wanting to be attached to,” he reports, adding “Putting money people together for something I believe in is something that I’ve done for a really long time.”

Tucker feels a show like Song of Solomon is sorely needed on Broadway now. “You have all these movie adaptations, kind of funny comedies that are book musicals,” he says. “This is a sung-through dramatic musical, much along the lines of ‘Les Miz’ or ‘Evita.’

“I do study the Bible regularly, so it’s really important to be that there’s a lot of historical accuracy,” says Tucker. Asked to describe the score, he responds, “It has that Middle Eastern flair, where you can really imagine the dusty roads and the hot sands of the area of the time. It’s very idiomatic to the location and the period.”

Looking for a local venue for the show, Tucker went to performance spaces he was already involved with. “I was working at the Arts Garage when I first started putting this evening together. I really wanted to make it work there, but the theater was just too small,” he says. “I’m on the board of directors at Old School Square, but they’re just getting started producing theater. They were a little nervous about taking on a brand new work.

“At the Wick, when I started talking about what the costumes will look like, you could see their eyes light up. And they had already produced for a year and a half. So they understood the budget and what it would take and they had the means and the connections to make this happen.”

Starring as Solomon will be Tony Award nominee Bob Cuccioli (Jekyll & Hyde), who signed on after hearing the score. “I think he had worked together with Andrew on a few projects in New York,” says Tucker. “He listened to the score and said, ‘Hey, this is pretty amazing music.’ ”

Tucker does know that most Broadway-bound shows never arrive there and of those that do, few become commercial successes. He remains optimistic, saying    “I’m fully aware of the odds on this, but when you believe in something you just follow your heart.”

Film: Playwright August Wilson began his chronicle of the African-American experience throughout the … END_OF_DOCUMENT_TOKEN_TO_BE_REPLACED

Film: Just in time with the opening of movie theaters in Palm Beach County comes the season’s most … END_OF_DOCUMENT_TOKEN_TO_BE_REPLACED

Music: The very last concert Franz Joseph Haydn attended in his life was in March 1808, about a year … END_OF_DOCUMENT_TOKEN_TO_BE_REPLACED