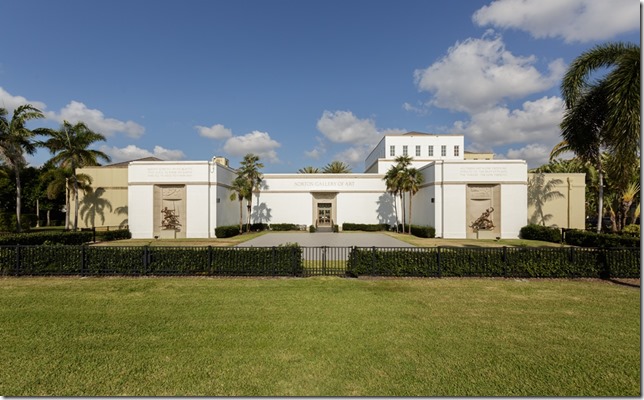 The 1941 entrance of the Norton Museum of Art.

WEST PALM BEACH — The Norton Museum of Art, which has been closed since May 30 to prepare for a three-year construction project, will reopen Tuesday, with admission free until late 2018.

The Norton is undergoing a major overhaul and expansion under the direction of the eminent British architect Norman Foster. The museum’s entrance will be reoriented to South Dixie Highway, and will include a new 42,000-square-foot West Wing that will increase gallery space and double the space devoted to educational programs. Completion is expected in time for the 2018-19 season.

Featured this summer is a video installation by American artist Mark Fox called Giverny: Journal of an Unseen Garden that comprises underwater views of the lily ponds in Giverny, France, that were captured in the art of Claude Monet.

The Norton also will debut a new book club, Book + Art: A Mashup for Art and Book Lovers, on July 30; the book will be Alice Hoffman’s The Marriage of Opposites, which deals with the artist Camille Pissarro. For more information, visit www.norton.org.

“In its first season, Theatre Lab established FAU as a force in the national professional theater movement,” said Lou Tyrrell, Theatre Lab’s artistic director and former head of Florida Stage and the Theatre at Arts Garage. “With our second season, Theatre Lab will produce three plays we helped to develop this past year.”

Theatre Lab’s mission is the development and production of new work in the American theater, and it provides training for FAU students interested in careers and nonprofit arts groups.

The first play is a world premiere, Deborah Zoe Laufer’s The Three Sisters of Weehawken, scheduled for Oct. 21-Nov. 6. Next is the Southeast premiere of This Random World, by Steven Dietz, which takes the stage Dec. 2-18.

Last is Motherland, by Allison Gregory, a new work inspired by Bertolt Brecht’s classic Mother Courage and Her Children. Performances are set from Jan. 27-Feb. 12

Film: Playwright August Wilson began his chronicle of the African-American experience throughout the … END_OF_DOCUMENT_TOKEN_TO_BE_REPLACED

Film: Just in time with the opening of movie theaters in Palm Beach County comes the season’s most … END_OF_DOCUMENT_TOKEN_TO_BE_REPLACED

Music: The very last concert Franz Joseph Haydn attended in his life was in March 1808, about a year … END_OF_DOCUMENT_TOKEN_TO_BE_REPLACED