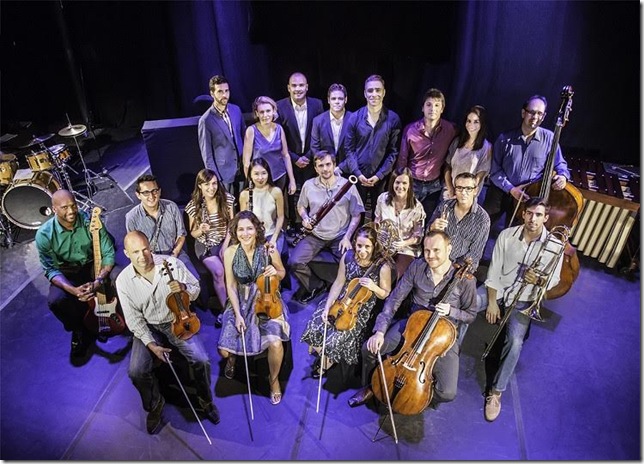 There has been nothing quite like it in Miami classical circles, to say nothing of South Florida as a whole, but it is a very good thing that it has now arrived.

The Nu Deco Ensemble, a chamber group that bills itself as a “21st-century orchestra,” presented the first concert in its inaugural season Friday and Saturday night at the Light Box at Goldman Warehouse in Wynwood.

Saturday night’s atmosphere was radically different than a standard concert, with its thumping house music before and after the show and during intermission, its side-by-side open bar (cocktails in one, wine in the other), its young, beautiful, metrosexual artsy crowd that packed the place to the gills, and especially its feeling of arrival and success, so unusual for most homegrown arts efforts, cloaked as they are in donations-please genteel poverty.

Led by Jacomo Bairos and Sam Hyken, Nu Deco is a chamber orchestra of about two dozen of South Florida’s most able classical musicians that is committed to two things above all: the idea of Miami as an important arts city, and the performance of contemporary classical music as an arts form that deserves to be part of the daily conversation rather than just special events. What makes Nu Deco different from new-music groups such as Eighth Blackbird is its affinity for the world of pop music, notably in Hyken’s custom orchestral suites of music by bands such as LCD Soundsystem, Daft Punk, Radiohead and Jamiroquai, and in its programming as a whole.

Saturday night’s concert opened with four contemporary classical pieces, while the second half featured a set from Brika, a rising young Miami pop singer, followed by Hyken’s four-part LCD Soundsystem Symphonic Suite. And it says something about the language of today’s classical composers that the whole concert had a relatively consistent sound profile: This was living, breathing crossover in which the audience could not only hear the blend of influences but the influences themselves.

The evening began (about 20 minutes late, which fit the party vibe admirably) with Urban Sprawl, a tone poem composed in 2011 by Clint Needham, who currently teaches at Baldwin Wallace University. It’s a great deal of fun, a high-energy mix of bubbling woodwind licks and hyper brass fragments that absolutely suggests the chaos of a city. You could call it An American in Paris: Millennial Version or describe it as George Gershwin-meets-Carl Stalling; it has a jump-cut, cartoony feel without any particularly prominent melodies but an infectious forward energy.

The orchestra played with snap and commitment, led with obvious enthusiasm by Bairos. Everybody on stage (actually the floor at the Light Box) was having a massively good time, and it showed on their faces and in their playing, not just in this work, but through the whole concert.

Next came three movements of a four-movement Octet for strings written in 2010 by Marc Mellits, a professor at the University of Illinois-Chicago. This minimalist-inflected music’s outer movements have a strong, aggressive profile, with hammered, forceful rhythms and many unison lines. Although there eight instruments, Mellits doesn’t write eight-part harmonies; he scores his voices more sparsely than that and doubles up.

The slow movement was quite different than its partners, with soft shimmers in the upper strings that unfolded into a long-breathed melody that ultimately settled into a series of long-held chords under which the two cellos played slowly rising pizzicati to soothing and very pretty effect.

Atmosphere was the dominant element in the next piece, Marcos Balter’s Bladed Stance, from 2013, in which the Brazilian composer set repeated, short bird-call-like figures in the winds under high, floating notes in the strings in which time moved very slowly over the compass of the piece. It’s hypnotic in its way, and would be quite useful as accompaniment for meditation.

The first half ended with Greg Simon’s Draw Me the Sun, an energetic work (also from 2013) with a very pronounced jazz flavor and a clear affinity with contemporary music for symphonic band. It’s gregarious, muscular music with some tricky rhythmic writing and fat jazz chords in the midsection that provided some attractive contrast to the drive of the final pages.

All of these pieces are very accessible examples of new music, and the audience was most receptive. Performances were very good, though Simon’s piece in particular could have used some more precision. Mellits’s Octet was probably the best piece of the four, though each of them demonstrated firmly that the field of contemporary classical composition is thriving, and full of exciting voices. 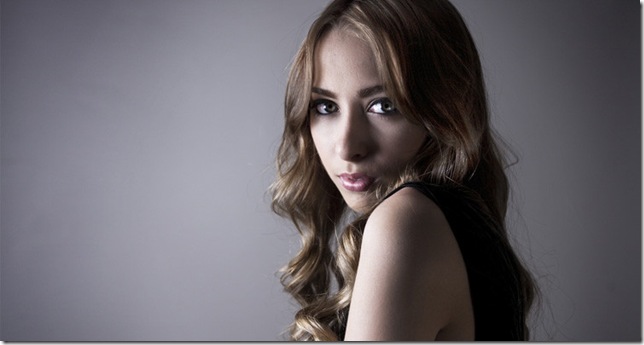 The audience was even more enthusiastic for the second half, which opened with a four-song set by Brika (Briana Martinez), a petite, lovely 20-year-old Miamian with a smoky, forceful, urgent alto well-suited to her songs of frustrated desire.

Accompanied by the ensemble and Colombian-born producer Julio Reyes Copello, a Latin Grammy winner and founder of the Art House Records label, Brika sat on a tall chair in the middle of the orchestra and gave a persuasive account of songs from her 2014 release, Voice Memos. She began with “Expectations,” designated as the breakout single from the album, a catchy, moody ballad with a talky lyric whose very profusion of words makes the song sound more honest.

“Options,” which came next, is similar in style, and like all four of the songs she sang Saturday, is in a minor key, which added a wistful romantic darkness to the set. The third song, “Overtime,” sounded like nothing so much as 1920s Kurt Weill, with its heavy, two-beat march format and clarinet commentary under a pleading, playful lyric.

The final song, “Gold,” brought Brika’s most powerful performance, with a semi-anthemic chorus (We were like dancing gold / I feel it in my bones / We were like gold) that she sang with high and committed emotion. The Light Box crowd adored her, and indeed she has all the makings of a big pop star. She knows how to craft radio-friendly pop that appeals to a young female audience that likes singers such as Lana Del Rey, but she is a cleaner, more accurate singer, with rock-solid intonation and none of the mannered gospel-influenced melismatics that so few vocalists can really pull off well.

And while her music has a fashionably melancholy melodic cast, it has more internal energy; there’s a trip-hop sensibility to it that commands attention. Everything in her artistic future will depend on the songs, but she’s off to a fine start, and she is in excellent hands with Reyes Copello in her corner. Brika makes her Los Angeles debut next week, and it may not be long before she’s reached a wider national audience.

The concert closed with Hyken’s LCD Soundsystem Suite, a four-part collection of tunes by the now-defunct New York electronica band led by James Murphy. Hyken, a trumpeter for the Miami Symphony Orchestra whose pieces for that group include a Beatles suite and a concerto for toy piano, is a gifted, facile arranger who knows how to translate house music into suitable orchestral tapestries. Murphy’s music derives rather weakly from Talking Heads and Tom Tom Club, but that scarcely bothered the people around me, who were moving around on their seats and bobbing their heads in dance-club ecstasy.

The four songs — “All My Friends,” “Someone Great,” “Home” and “Dance Yrself Clean” — depend a lot on the cumulative power of repeated rhythm, and Hyken set that up well, making lavish use of his percussionists, particularly Elizabeth Galvan, who was sprinting between instruments at the back of the stage. Bass guitarist Dale Posey provided a great deal of subterranean thrust that bridged the gap between both worlds, but the orchestra played like they didn’t need it, as they were locked into a groove they weren’t going to give up easily.

Although Hyken always gave the chief melodic statements to the trumpet, horn and trombone, it made sense for orienting the listener to the LCD originals and to the soundscape of the songs, with their gradual layering on top of a steady river of beat. Hyken provided some smart orchestral colors, using the high register of Gabriel Beavers’s bassoon to bring out one phrase, and he also allowed some improvisational leeway in one of the pieces, filled ably by trombonist Maciej Pietraszko.

It was delightful to listen to, and after fervent applause and demands for an encore, Bairos obliged with a selection from Hyken’s suite of music by the French house duo Daft Punk (Guy-Manuel de Homem-Christo and Thomas Bangalter), which provided more of the same giddy vibe.

This was a remarkable concert in every important way. Nu Deco’s first-eveer concert was in the spring, but Friday and Saturday’s concerts were the first ones in their debut season, and they mark the arrival of an important performing group on the Miami scene. The five concerts to come in the season (the next one is Nov. 22 at the Deering Estate) will have more of Hyken’s arrangements, pieces by Needham and Simon, as well as Andy Akiho and Paul Dooley, two other established contemporary American composers. There also will be music by Hindemith, Bach and Bizet, which will widen the group’s range to include some canonical composers.

For its sheer ambition and its determination to put new music at its core, Nu Deco Ensemble fills a vital, long-needed role in local concert life, and it is to be heartily welcomed and wished every possible success. Virtually all of the music on the debut program was slight, but it had tremendous appeal, and if Nu Deco can give us an occasional moment of profundity in future concerts to go along with its ear candy, then a couple nights in Wynwood in late September 2015 will have truly been the start of something not just big, but transformative.

Film: Playwright August Wilson began his chronicle of the African-American experience throughout the … END_OF_DOCUMENT_TOKEN_TO_BE_REPLACED

Film: Just in time with the opening of movie theaters in Palm Beach County comes the season’s most … END_OF_DOCUMENT_TOKEN_TO_BE_REPLACED

Music: The very last concert Franz Joseph Haydn attended in his life was in March 1808, about a year … END_OF_DOCUMENT_TOKEN_TO_BE_REPLACED