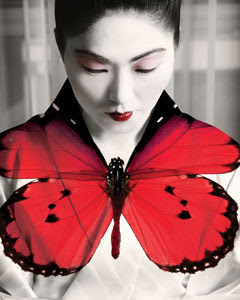 By Greg Stepanich
FORT LAUDERDALE — The subscription renewals table in the lobby of the Broward Center for the Performing Arts at intermission Saturday night looked promising for the next season of Florida Grand Opera.
If it turns out to have been a good night for the Miami company to have signed up returning opera fans, it will have a Chinese soprano to thank.
Shu-Ying Li, who closed FGO’s 68th season this weekend in the title role of Puccini’s Madama Butterfly, embodies the role of the tragic ex-geisha and child bride in a way that was definitive: Feisty, determined, passionate, aware of what she was doing, and acting in accord with the dictates of a life lived with honor. While I have heard many a beautiful performance of the music from this popular opera, I have never seen a better-acted or better-sung Cio-Cio San when it comes to the totality of the role.
As a singer, Li as a strong, rich soprano voice that betrayed not a hint of fatigue or strain throughout the opera, surely testament to what must be an impressive technique. Her Un bel di was warm and wonderfully paced, especially in the section beginning Chi sara? Chi sara?, and her last anguished Tu, tu piccolo idio to her son was ravishing and monumental. With the exception of Katharine Goeldner’s fine Suzuki, Li simply outclassed everyone else on the stage, and sang them right off it.
And she was a terrific actress, identifying with the character in a way that made her ultimate betrayal even more heartbreaking than usual. You believed her when she turned on naysayers with violence and threats of homicide, you laughed along with her as she impersonated both sides of an imaginary American divorce proceeding. And at the moment when Sharpless raises the question of what she’d do were Pinkerton never to return, Li’s powerful reaction and muted singing as she spelled out the two miserable alternatives was stunning, and perfectly set the rest of the opera’s events in motion.
This was an authentic star turn for Li, who has sung the role more than 100 times, and can fairly lay claim to have created a Cio-Cio San for our time: A bold, ambitious, smart girl done in by her delusions, but admirable just the same, and a far cry from the meek, awed Butterfly of decades past, or indeed, of its embarrassing source material.
As Pinkerton, the Mexican tenor Arturo Chacon-Cruz was adequate, but his voice sounded tired and underpowered much of the time. In the most important part, the love duet that closes Act I, he was very much the inferior partner, and that’s unfortunate. Pinkerton needs to be majestic in his manliness, and Chacon-Cruz wasn’t commanding enough there for us to believe that he would be able to sweep this kind of Cio-Cio San off her feet.
Goeldner, on the other hand, was a good Suzuki, and her voice, which was similar in weight and tone to Li’s, blended well with her counterpart in the Flower Duet as the two women scattered petals throughout the house. She was also firm and properly outraged as she tried to shield Cio-Cio San from the machinations of the Americans.
Both Jake Gardner, as Sharpless the American consul, and Jeffrey Halili, as Goro the marriage broker, were serviceable if not exceptional. Sidney Outlaw, in the double role of Prince Yamadori and the imperial commissioner, was less so, and Carlos Monzon was an ineffective, small-voiced Bonze.
Bernard Uzan’s direction was quite good, with tasteful if conservative choices for the transition from Act II to III (curtain down) and Butterfly’s suicide (behind the screen). This was a handsome Butterfly, too, with a single lovely set by Roberto Oswald from the Montreal Opera of giant shoji screens spread across the stage, and gorgeous costumes from Anibal Lapiz.
Uzan said before the production opened that he wanted to keep the Japanese and Americans distinct — no Goro in a bowler hat, for instance — and this mounting of the opera showed the wisdom of that approach.
The chorus, especially the women on their way out of the wedding party casting shame on Cio-Cio San, sang with accuracy and style, and the orchestra played exceptionally well for conductor Stewart Robertson. His direction was a little on the fast side, in particular the somewhat rushed love duet, but overall Robertson handled the musical side of things with excellence.
The Florida Grand Opera will present four productions in its 2009-10 season: A double bill of Ruggero Leoncavallo’s I Pagliacci paired with Giacomo Puccini’s Suor Angelica; Gaetano Donizetti’s Lucia di Lammermoor; Gioachino Rossini’s The Barber of Seville; and Georges Bizet’s Carmen. For more information, call 1-800-741-1010 or visit www.fgo.org.

Film: Playwright August Wilson began his chronicle of the African-American experience throughout the … END_OF_DOCUMENT_TOKEN_TO_BE_REPLACED

Film: Just in time with the opening of movie theaters in Palm Beach County comes the season’s most … END_OF_DOCUMENT_TOKEN_TO_BE_REPLACED

Music: The very last concert Franz Joseph Haydn attended in his life was in March 1808, about a year … END_OF_DOCUMENT_TOKEN_TO_BE_REPLACED