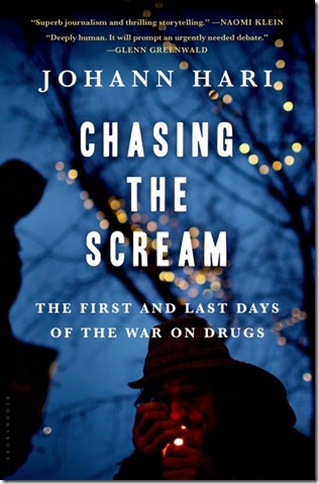 The war on drugs has spawned more crime, violence, addiction and suffering — the exact opposite of what was intended. That is the theme of this provocative and timely book by British author Johann Hari, who spent three years researching the subject.

In 1914, Congress banned the sale of heroin and cocaine, although doctors could continue to prescribe these drugs. But that medical exemption was ignored by an anti-drug fanatic named Harry Anslinger, who headed the Federal Bureau of Narcotics and vowed to stamp out illegal drugs.

The book’s title refers to an incident when Anslinger was a boy and heard a woman screaming for a fix. That memory stuck with him and motivated his anti-drug crusade.

Hari offers abundant evidence that when drugs or alcohol are banned, the market for illegal drugs and liquor flourishes, with disastrous consequences.

He describes successful campaigns in Canada, Britain, Switzerland and Uruguay to legalize the possession of drugs, and in some cases, the sale of drugs. The results have been dramatic. When safe houses for addicts opened in Vancouver, drug-related violence and crime dropped dramatically.

Switzerland found that when heroin addicts could get their fix legally at a clinic, muggings and vehicle thefts nosedived. Similar results were reported in Portugal, where 90 percent of the money spent on drug policy goes to treatment and prevention and only 10 percent to policing and punishment, the exact opposite of the United States.

Chasing the Scream describes bloody civil wars in Mexico between rival drug cartels, each wanting a share of the billions of dollars in profits from shipments of heroin to eager buyers in the United States. Mexican gangs train young boys as killers. A 13-year-old is handed a gun and directed to kill a kneeling man who pleads for his life. The boy complies by shooting the man in the head, the first of countless murders he would carry out.

When alcohol or drugs are banned, buyers turn to the illegal market. Gang violence soars and overdose deaths skyrocket. Murders in the United States increased dramatically twice — first during Prohibition from 1920 to 1933 and during the two decades beginning in 1970 when the war on drugs escalated.

“When the government war on alcohol stopped, the gangster war for alcohol stopped. …” Hari writes. “That’s why today, it is impossible to imagine gun-toting kids selling Heineken shooting kids on the next block for selling Corona Extra.”

Chasing the Scream is notable for its careful weighing of evidence. Hari interviewed people on each side of important questions regarding addiction. The book is a sterling example of investigative reporting at its best.

Alcohol and nicotine are the two most destructive substances. Both are legal and each is regulated. Smoking tobacco, Hari notes, kills far more people than cocaine.

One of the book’s most important messages is that the vast majority of drug abusers were mistreated as children. After years of rejection, neglect and punishment, they turned to drugs for relief.

Hari was drawn to the subject because “I had been swallowing fistfuls of fat white narcolepsy pills for years.” After weighing arguments pro and con, Hari comes down clearly on the side of drug legalization, with reservations. He favors gradual changes, keeping in mind the need to protect vulnerable children, citing the damage marijuana can inflict on developing brains.

Many people assume that regular use of illegal drugs leads inevitably to addiction, but Hari cites a United Nations study that concluded that only 10 percent of users become addicts. The vast majority of users continue to hold jobs, support their families and take part in community activities.

Every member of Congress and every drug policy official should read this enlightening book. Change is in the air. Washington and Colorado have legalized the sale and possession of marijuana. Other states are likely to follow.

Chasing the Scream: The First and Last Days of the War on Drugs, By Johann Hari; Bloomsbury, 389 pp., $27

Film: Playwright August Wilson began his chronicle of the African-American experience throughout the … END_OF_DOCUMENT_TOKEN_TO_BE_REPLACED

Film: Just in time with the opening of movie theaters in Palm Beach County comes the season’s most … END_OF_DOCUMENT_TOKEN_TO_BE_REPLACED

Music: The very last concert Franz Joseph Haydn attended in his life was in March 1808, about a year … END_OF_DOCUMENT_TOKEN_TO_BE_REPLACED