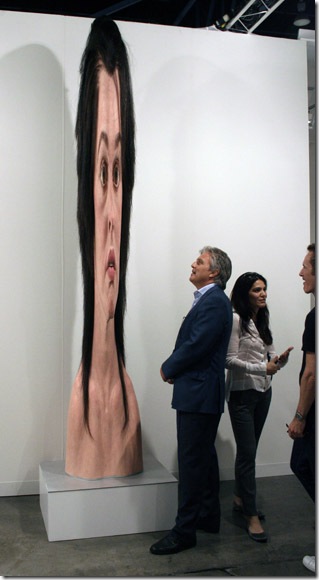 The larger-than-life, realistic sculptures by the Canadian artist Evan Penny caused a stir at last year’s Art Basel, with his nude self-portrait selling within the show’s first days.

At this year’s Art Basel, Penny is proving just as provocative. Penny’s sculptures aren’t simply lifelike reproductions, even though it may seem so when you first see them. From a different angle, they are terribly distorted, like they have been thinned. A case in point: His Female Stretch, a 10-foot-tall sculpture. 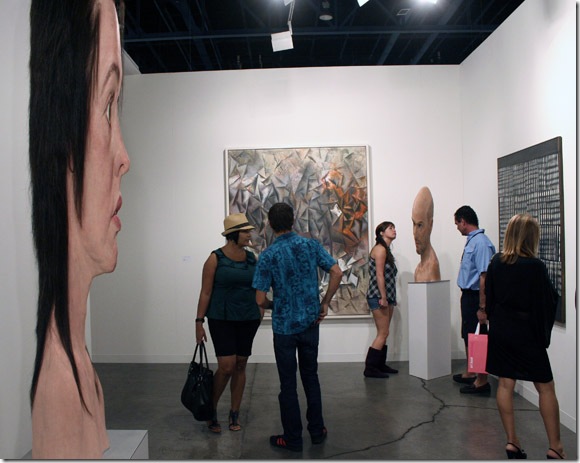 From the side, although truly gigantic and wide-eyed, the woman seems somewhat lifelike, but look at her straight on and her face is less than half of what it should be. Penny creates the sculptures by utilizing a laser scan of the person, and then manipulates it, creating the final piece in silicone, hair, pigment and aluminum. Female Stretch and Self Stretch, Variation #2 are in the Sperone Westwater booth.

* Gavlak Gallery, which recently moved to Palm Beach, featured one artist in its Art Basel booth in Art Nova: Phillip Estlund, a sculpture-collage-video artist based in Lake Worth. Estlund’s work is based on the concept of human beings’ relationship to nature and man’s vain attempt to control and manipulate nature. 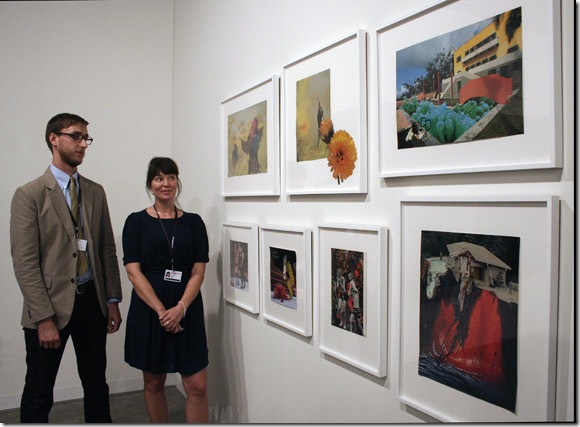 Estlund has recently had three exhibitions in New York and is in the collection at the Museum of Contemporary Art in North Miami. 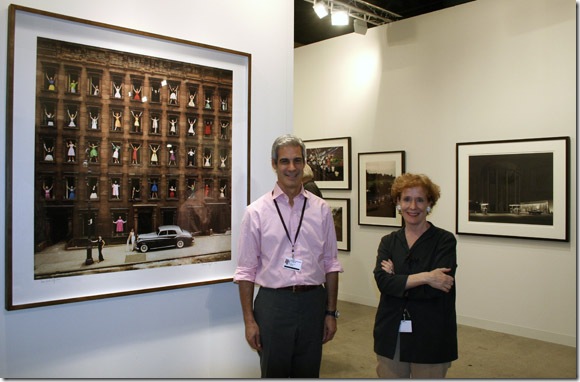 * The Chelsea arts district of New York is home to Danziger Projects, which concentrates on photographic artists. Gallery owner James Danziger was assisted by curator and gallerist Kitty Bowe Hearty in the booth, which features iconic images such as Girls in the Windows, by Ormond Gigli (1960); Muhammad Ali ‘Training’ Underwater, by Flip Schulke (1960); images from the RFK funeral train by Paul Fusco (these 1968 photos will be featured at the Norton Museum of Art in 2010); Marilyn Monroe, by Richard Avedon; Petit’s Mobil Station, by George Tice (1974); and many beautifully photographed images by Annie Leibovitz.

* A singular video played in the booth of the Reykjavik, Iceland-based i8 Gallery. Five Boxes by Iceland native and Berlin resident Egill Saebjörnsson was amazingly three-dimensional, clever and technically brilliant. Saebjörnsson projected a video onto four white boxes that appeared to moved and fly off, then return back to line up perfectly with the box again. Occasionally, the top of one of the boxes seems to lift up and a banana pops out and goes into an adjacent box. A timed noise emanates from the box to simulate the sound of a box opening and closing. (Take a few minutes to watch the video in booth D-20.) 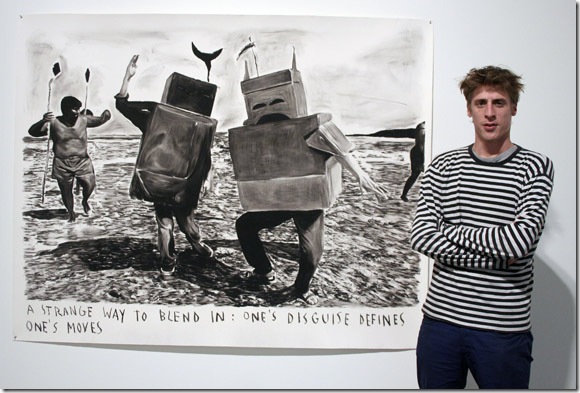 * A great deal of technical skill and innovative conceptual acumen is evident in the work of 26-year-old Belgian artist Rinus Van de Velde who creates large drawings (approximately 6 feet by 4 feet) using old magazines such as National Geographic for reference and then boldly captions them from his own set of mythologies. Van de Velde is represented by Galerie Zink.

* Actor Dennis Hopper of Easy Rider fame received big billing in wall space at the Tony Shafrazi Gallery, where his 20-inch-by-16 inch black-and-white photographs of famous artists and movie stars were on display near huge paintings of the same photograph. Hopper worked with billboard artists, directing the production of the large paintings. 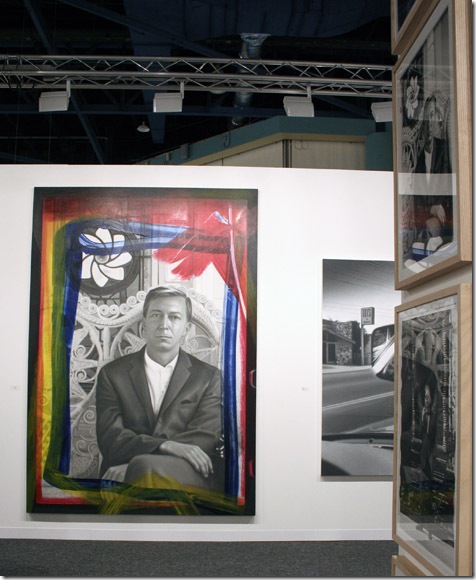 Particularly eye-catching was the painting of artist Jasper Johns, as colored swirls outlined the image. Turns out they were marks on the original contact sheet.
Also on display at the Tony Shafrazi Gallery is an amazing photographic triptych  by David LaChappelle of Michael Jackson as a saint, an angel fighting the devil and resting in the arms of Jesus. 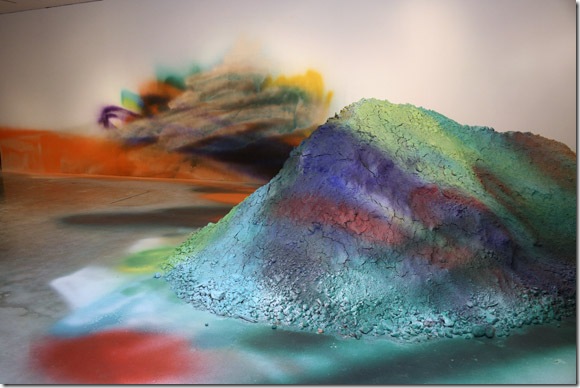 ** Thursday night, the Miami Art Museum threw a VIP party that attracted close to 1,000 guests. The exhibit on the first floor of the museum, Space as Medium, includes sculptures, as well as paintings and photographs and a colorful, large installation by German artist Katharina Grosse fashioned from Styrofoam, soil and acrylic paint. The Miami Art Museum is located in downtown Miami at 101 W. Flagler St. For more information, call (305) 375-3000.

Art Basel runs through Sunday. One-day tickets are $35 and students and seniors are $20. Multi-day tickets are also available. Hours are noon through 8 p.m. today and noon to 6 p.m. Sunday. For more information, visit www.artbaselmiamibeach.com.

Film: Playwright August Wilson began his chronicle of the African-American experience throughout the … END_OF_DOCUMENT_TOKEN_TO_BE_REPLACED

Film: Just in time with the opening of movie theaters in Palm Beach County comes the season’s most … END_OF_DOCUMENT_TOKEN_TO_BE_REPLACED

Music: The very last concert Franz Joseph Haydn attended in his life was in March 1808, about a year … END_OF_DOCUMENT_TOKEN_TO_BE_REPLACED