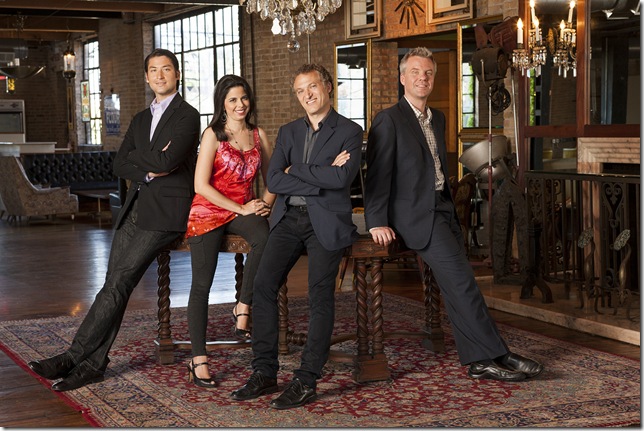 One of America’s finest string quartets, the Pacifica Quartet, opens the musical year with a performance Friday afternoon at the Kravis Center of music by Ravel and Haydn, as well as the Piano Quintet of Johannes Brahms, for which they will be joined by pianist Christopher O’Riley, familiar to public radio audiences as the host of From the Top.

The performance should start 2015 off in standout style, but concertgoers should also be aware that the Pacifica Quartet’s most epic recent contribution to the art form is its magnificent survey, recorded from 2010 to 2013, of the complete 15 quartets of Dmitri Shostakovich.

The recordings were released as a full set this summer by Chicago’s Cedille Records under the title “The Soviet Experience,” an homage to a 16-month multi-disciplinary festival retrospective in that city of art produced behind the Iron Curtain. The Pacifica also includes individual quartets by Sergei Prokofiev (No. 2), Alfred Schnittke (No. 3), Miesczyslaw Weinberg (No. 6) and Nikolai Miaskovsky (No. 13) in the set, which helps round out the cultural context in which Shostakovich produced his cycle of quartets.

When the group decided to perform the entire Shostakovich cycle, at the suggestion of the legendary former president of the Chicago Symphony, Henry Fogel, they were not familiar with most of the pieces, said Masumi Per Rostad, the group’s violist.

“We didn’t know the majority of them,” said Rostad, 36, a Juilliard-trained New Yorker who joined the Pacifica in 2001. “That’s something I’m really proud of about my colleagues: We have a voracious appetite. We’ll take on more than we can chew and then we’ll chew it.”

Doing a Shostakovich cycle “felt right, it made sense. It was music that we were all equally interested to get into and learn more about.”

Once the quartet — the other members are violinists Simin Ganatra and Sibbi Bernhardsson, and cellist Brandon Vamos — got more acquainted with this literature, it came as something of a shared discovery, Rostad said.

“Personally, I had a very naïve view of Shostakovich’s music. I think I sort of expected Siberian landscapes, and when actually we got to the 15 quartets, it was there,” he said. “But somehow I expected a lot of his music to be like that. And I was really surprised by the variety, the richness of his emotional range, of his levity. So much of the music is actually buoyant, and there’s a verve to it, a kind of wit, and that’s something I wasn’t prepared for.

“I was just thinking, ‘Oh, man, we’re going to be doing 15 heavy pieces. I’m going to be depressed. I’m going to need anti-depressants,’” he said. “But in a way (the quartets are) similar to Beethoven in that Beethoven has so much struggle in his music, but he’s so optimistic, he ends with his fists in the air.

“And I think Shostakovich has a kind of defiance in his music as well. It’s of course a very different trajectory than that of Beethoven, but there’s the same kind of survivor mentality.” 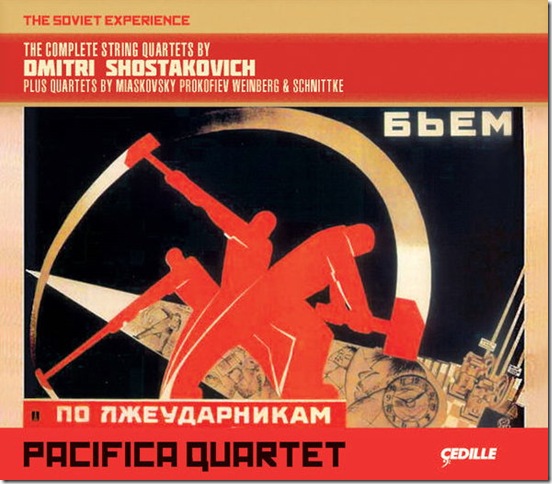 In addition to studying the music, members of the quartet read a good deal about Shostakovich and his times in order to understand more about the music, including Solomon Volkov’s controversial Testimony (1979) and Wendy Lesser’s Music for Silenced Voices (2011), a remarkably perceptive overview of the 15 quartets by a non-musician.

“We tried to read as much as we could, and each of us brought different things to the conversation,” Rostad said. “One of the things that’s kind of difficult when you’re performing these works is finding that fine line between seeing what’s in the score, or imagining what’s in the score because of what you’ve read … It’s kind of a hard thing to balance, but at some point you have to look at Shostakovich’s life, and in the context of world history.”

Tackling all the works at once also opened up interpretive vistas not visible from the standpoint of just one or another of the works, Rostad said. The Pacifica has recorded the complete five quartets of American composer Elliott Carter and the complete music for string quartet of Felix Mendelssohn, which includes the six mature quartets, a youthful exercise in the genre, and the Four Pieces (Op. 81). The Pacifica also performed a complete cycle of the 16 Beethoven quartets in the 2007-08 season.

“It’s not just quartets, but any kind of musical group or musical individual, to explore the works of a single composer. You get a much better understanding, when you have several works that span a period, or the entire working lifetime of a composer, you really begin to understand them better. You begin to understand their language, and I think that’s something that’s really important,” he said.

“If there was only one Shostakovich quartet, it probably wouldn’t be played as well without the other 14 informing our interpretive decisions … That’s true of all the cycles we’ve done. They get better when we work on the entire cycle, because then you go back to that first piece you learned … and suddenly you get a better understanding of what things mean.”

(This video of a National Public Radio Tiny Desk Concert features the Pacifica playing movements from the Third, Seventh and Eighth quartets.)

The Pacifica Quartet was founded 20 years ago in Southern California, and while the group left the area shortly afterward, “the name stuck,” Rostad said. It has largely been a Midwest-based quartet for the past decade or so, with a residency from 2003-11 at the University of Illinois, and a current residency at Indiana University. They also are the quartet in residence at the University of Chicago, and from 2009-12 were the resident quartet at New York’s Metropolitan Museum of Art.

The group won the Naumburg Chamber Music Award in 1998 and an Avery Fisher Career Grant in 2006. Its recording of the Carter Quartets No. 1 and 5 for Naxos won the Pacifica Quartet a Grammy award in 2009, and the foursome has just finished recording the Brahms Piano Quintet with 91-year-old pianist Menahem Pressler, the pianist for the Beaux Arts Trio for its entire existence from 1955 to 2008.

“He’s a revelation,” Rostad said, speaking by phone from Bloomington, Ind. “Nobody plays that way anymore, with that kind of artistry.”

Other recordings recently released or soon to be include a performance of the Piano Quintet by the once-popular American pianist and composer Leo Ornstein, recorded with the Canadian pianist Marc-André Hamelin, and a survey of the Mozart and Brahms clarinet quintets with Anthony McGill, now principal clarinetist of the New York Philharmonic, having spent a decade as principal clarinetist for the Metropolitan Opera Orchestra.

Friday’s program, in addition to the Brahms Piano Quintet (in F minor, Op. 34) includes the Ravel String Quartet (in F, his sole exercise in this medium), and the Sunrise Quartet (No. 63 in B-flat, Hob. III: 78) of Haydn. The quartet had been scheduled to perform with the Canadian pianist Anton Kuerti, who suffered some kind of cerebral attack during a concert in Coral Gables in October 2013, and has not been able to return to the concert stage yet as he had hoped.

The group’s lineup, which has been the same almost 14 years, allows the players to work together in a profound way, because they can draw on their shared experiences.

“All of us had wanted to play string quartets since we were very young,” Rostad said of himself and his colleagues. “But then when you’re actually in a real, working string quartet, the things that you think are going to be great maybe aren’t the things you really end up cherishing, but the things you never even thought about are kind of like, ‘Wow, that’s really great, that makes the whole experience even more worthwhile.’”

There was a lot of getting to know each other when Rostad joined the group in 2001, replacing founding violist Kathryn Lockwood, now of the Lark Quartet. 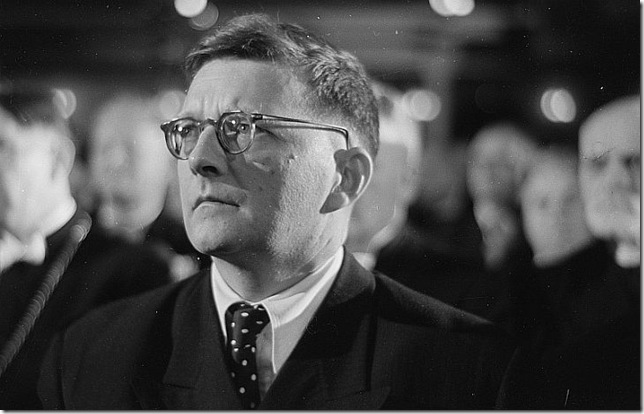 The language of Shostakovich’s string quartet writing was developed along with his close relationship with the Beethoven Quartet of Moscow, which premiered most of these quartets.

“He’s experimenting a lot through these quartets. He’s really trying to see what’s possible and what he’s interested in,” Rostad said. “… And so we see Shostakovich in the Twelfth Quartet playing around with 12-tone, and in other quartets he does try to extended techniques, like in the Thirteenth Quartet he’s got us tapping on our instruments with our bows to create different kinds of sounds. It’s interesting to see him try things out.”

For Rostad, the most difficult of the 15 quartets to play is the last one, No. 15 in E-flat minor (Op. 144), written in 1974 and premiered in January 1975, eight months before the composer’s death. It consists of six slow movements back to back, in what amounts to a 35-minute elegy. Rostad said Shostakovich’s coaching advice to the Beethovens —“Play it so that flies drop dead in mid-air, and the audience starts leaving the hall from sheer boredom” — took real artistic courage.

“I find that the Fifteenth Quartet works best as the culmination of a sequential cycle. When the performers and the audience together have sat through 14 of the Shostakovich quartets, and have really gone through that journey together, and you cap it with the Fifteenth — it’s such a powerful thing. It’s so amazing. It’s pure genius,” he said.

“If you were just to play the Fifteenth Quartet, it’s a great piece. But as the end of a cycle, it just goes into a whole different category,” he said. “It’s so difficult to pull off, and I think in a way it requires the collective experience of the 14 quartets in recent memory as a lead-up to the Fifteenth. And then it’s just this amazing, devastating, powerful, scary, vibrant work.”

And in the long run, one of the qualities that makes Shostakovich’s music so compelling has to do with the power of omission, Rostad said.

“I think one of the real strengths of Shostakovich is actually what he doesn’t say. It’s what he can imply, and where you can fill in the blanks,” he said. “When you look at his score, it’s often quite bleak, and there’s not a lot of visual noise, and that affects us as interpreters.

“But it’s also relevant to what’s actually happening. There’s a lot of space in there, and he’s not afraid of it. He’s not afraid of taking time for things to breathe, for giving the audience the chance to reflect and think.”

The Pacifica Quartet, with guest pianist Christopher O’Riley, performs at 2 p.m. Friday in the Kravis Center. Tickets start at $25. Call 832-7469 or visit www.kravis.org.

Film: Playwright August Wilson began his chronicle of the African-American experience throughout the … END_OF_DOCUMENT_TOKEN_TO_BE_REPLACED

Film: Just in time with the opening of movie theaters in Palm Beach County comes the season’s most … END_OF_DOCUMENT_TOKEN_TO_BE_REPLACED

Music: The very last concert Franz Joseph Haydn attended in his life was in March 1808, about a year … END_OF_DOCUMENT_TOKEN_TO_BE_REPLACED