The Palm Beach Book Festival, now in its seventh year, returns for the second year as a virtual event later this month.

New York Times bestselling authors Larry Loftis, Kristin Harmel and George Saunders are in the lineup for the festival, which is set for March 19 and 20.

Scheduled to take place last March (the same week as the quarantine began) the event moved from FAU’s Dorothy F. Schmidt College of Arts and Letters to a virtual format, where it remains this year as well.

“We put our heads together and decided to do monthly one-offs over the summer and fall with various authors,” she says. “It worked well and we learned how to navigate Zoom together.”

“Hopefully, 2021 is the last Zoom festival,” she says. “We hope to go live in 2022. I miss hugging our patrons and feeling the energy of a live show.” 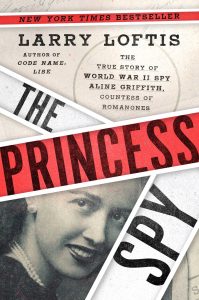 Loftis, who just finished The Princess Spy last March, is the bestselling author of the nonfiction spy thrillers Code Name: Lise — The True Story of the Woman Who Became WWII’s Most Highly Decorated Spy and Into the Lion’s Mouth: The True Story of Dusko Popov — World War II Spy, Patriot, and the Real-Life Inspiration for James Bond.

His goal is to write thrillers, and he looks for real-life stories that are a page-turners, a goal he has met with The Princess Spy. The novel recounts the true story of María Aline Griffith Dexter, countess of Romanones, an American-born spy from Pearl River, N.Y., who worked in the U.S. Office of Strategic Services (OSS) during World War II and later for the CIA as a spy.

Her story was little-known until Loftis brought it to light.

“It’s a wonderful story and I completely fell in love with it,” says Loftis. “Aline was 22, beautiful, a small-town girl from upstate N.Y. and a model sporting the latest Hattie Carnegie designs. She went to a dinner party on a blind date with an OSS guy from Washington and mentioned she wanted to join the war effort.”

Loftis recounts that a Mr. Tomlinson recruited her and she learned to shoot all kinds of guns — machine guns and tommy guns, learned to fight and kill with a knife and became a female version of James Bond.

She deployed to Madrid where she became a coder and lived the James Bond lifestyle — going to parties, bullfights, flamenco dances and socializing with royalty.

“No one knows about her,” recalls Loftis. “This is the sexy part of the story. All the men are enamored by her and a famous bullfighter (Juanito Belmonte) falls in love with her. No one realizes she’s a spy for the Americans.”

Eventually she meets and marries Luis Figueroa, the count of Romanones, and she becomes countess of Raomanones, although she was still working as a spy for William Casey and the CIA well into the 1980s.

The countess died in 2017, at age 94 and left behind her memoirs, a first-person account of her exploits that Loftis used in writing this book.

“Under all the espionage – the danger and murders and Alfred Hitchcock-esque suspense and drama is a love story,” says Loftis, who spent one year researching and the next year writing the book. “Everything is true and documented.”

A former attorney, Loftis is meticulous with his research and has 63 pages of end notes to prove it.

“It’s a lot of work, but I get to go home with a full basket of gold,” he says about his time researching. “That’s the enjoyment.” 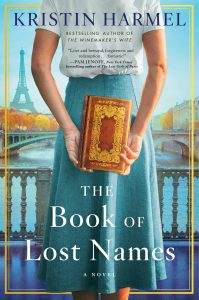 In conversation with Loftis on the panel is Harmel, a former reporter for People magazine whose best-selling novel, The Book of Lost Names also takes place during World War II – her fifth novel set during that era. Her other books include The Winemaker’s Wife and The Room on Rue Amélie, both involving the French Resistance.

Harmel’s interest in all things World War II began as a child after reading The Diary of Anne Frank.

“This was the book that made me want to become a writer,” Harmel recalls. “I always dreamed about writing, but thought that entertaining and changing the world were mutually exclusive until I read Anne’s diary and realized that you could do both.”

While researching and writing these novels, Harmel (who has Jewish ancestry on her father’s side) becomes fascinated by stories of people escaping the Nazis using falsified documents. She begins to wonder: Who made these documents? How and where did they make them? What was their background?

“This kept nibbling at me,” she says by phone where she was doing double-duty, watching her 5-year-old son, Noah, on a playdate.

“That concept forms the basis of this story, but it wasn’t until my agent sent me a ‘New York Times’ article about Nazi looted books and the efforts to return them to their rightful owners that the quintessential light bulb went off,” she says.

“I find the forgers fascinating,” says Harmel. “Using art, science and their imagination these people put their own lives at risk to save hundreds of thousands of lives.”

What saved her own life (metaphorically speaking) during the quarantine was creating the Friends and Fiction Facebook group with fellow authors Mary Kay Andrews, Mary Alice Monroe, Patti Callahan Henry and Kristy Woodson Harvey. She considers this one of the highlights of her career to date.

The group, which has grown to 30,000 members, discusses books, writing, and hosts authors each week on Facebook Live while promoting independent bookstores.

“Having the opportunity to talk to other people who love books and forging a friendship with the other authors has been a blessing this year,” she says. “I don’t think I would have finished my book without them.”

For Harmel, who aspires one day to pen a screenplay, uncovering surprising aspects of history and sharing them with readers is what keeps her going. 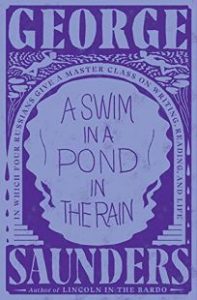 The second panel highlights George Saunders, author of A Swim in a Pond in the Rain, an instant New York Times bestseller. Saunders has written 10 books, including Lincoln in the Bardo, which earned him the Man Booker Prize and teaches in the creative writing program at Syracuse University. The panel will be moderated by O Magazine editor Leigh Haber.

“It’s not heavy,” says Saunders, 62, about A Swim in a Pond in the Rain, his takeaway on seven classic Russian short stories by Chekhov, Turgenev, Tolstoy and Gogol. “They’re valuable for what they can teach us about the craft of writing and about ourselves.”

His go-to authors include those Russians as well as Dostoevsky, plus Americans Tobias Wolff, Grace Paley, Kurt Vonnegut and Toni Morrison, a personal friend of his wife, Paula, also a writer.

The two met in the graduate creative writing program at Syracuse and got engaged after three weeks.

“I’d like to make 19th-century Russian literature accessible for everyone,” says Saunders. “Mostly, it’s about people and situations. I want readers to become comfortable with it, and hope my students can learn some tricks of the trade.”

The author, despite tackling the serious subject matter of Russian literature, has appeared on A Late Show with Stephen Colbert and been called a “rock-star author,” a term he rejects saying, “it’s a bit like being called the tallest pygmy.”

“There’s no formula for writing short stories,” he says, comparing the effort to crafting a joke. “In short stories – like a joke – you have to drive to the punch line quickly,” he says. “Understand pacing and efficiency and be specific.”

“Like gravity,” he says, “there are laws of storytelling.”

The Russian writers in Saunders’s book have something special to say, he said.

“For the Russians, the purpose of literature is to make life richer,” he says. “This has been lost in our culture where reading and writing have become marginalized.”

“Cultures who put literature first, thrive,” he says, making an analogy about “a loss of storytelling and loss of empathy” contributing to the storming of the Capitol last January.

Now living part-time in northern California and part-time in the Catskill Mountains in upstate New York, Saunders says the Russian writers were the first writers who spoke to him.

While he acknowledges it was ego and the desire to earn a living that compelled his writing initially, Saunders says he’s come to enjoy the process and finds it eminently satisfying to create something out of nothing like a sculptor whose figure emerges from stone.

“I am very lucky to be able to write for a living,” he says.

The third panel, titled, “You Don’t Have to Be Jewish to Love this Panel!” takes place March 20 at and features Barry Sonnenfeld, film director and author of Barry Sonnenfeld, Call Your Mother! in conversation with Patricia Marx, author of You Can Only Yell at Me For One Thing at a Time.

The additional event, will also be on March 20 and features Blain being interviewed by FAU history professor Candace Cunningham. Four Hundred Souls is a collection of essays by 90 Black writers reflecting on the 400 years of African-American history.

Film: Playwright August Wilson began his chronicle of the African-American experience throughout the … END_OF_DOCUMENT_TOKEN_TO_BE_REPLACED

Film: Just in time with the opening of movie theaters in Palm Beach County comes the season’s most … END_OF_DOCUMENT_TOKEN_TO_BE_REPLACED

Music: The very last concert Franz Joseph Haydn attended in his life was in March 1808, about a year … END_OF_DOCUMENT_TOKEN_TO_BE_REPLACED