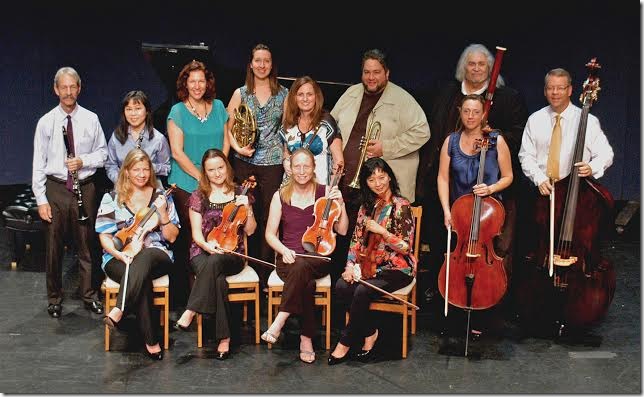 What is surely one of Palm Beach County’s longest-running summer concert series returns tonight for its 23rd season, as some of the area’s best-known classical musicians gather for four weekends of chamber music.

The works on this year’s iteration of the Palm Beach Chamber Music Festival are perhaps more unfamiliar than usual, but the programming of music that’s off the beaten track, and yet highly rewarding, is a standard feature of this series.

“There’s nothing crazy this year, nothing too out of bounds,” said Michael Forte, the clarinetist who along with flutist Karen Dixon and bassoonist Michael Ellert dreamed up the festival back in the summer of 1992.

“We like to say that we’ve trained our audiences, because they know to trust us at this point,” Dixon said.

The festival always runs for four weekends, with performances each Friday, Saturday and Sunday in different parts of the county. Friday night’s concerts are at the Persson Recital Hall on the campus of Palm Beach Atlantic University, and Saturday night, the concerts are heard at the Eissey Campus Theatre in Palm Beach Gardens.

On Sunday afternoons, the festival moves to the Crest Theatre at the Delray Beach Center for the Arts. The series is opening this year on a Thursday night because of the Independence Day holiday on the Fourth. Times have also changed, with both the Friday and Saturday night concerts beginning at 7:30 p.m. Sunday’s concerts begin at 2 p.m.

Tonight’s concert is likely the most unusual, with two works from 20th-century Britain and a large work from early 19th-century Vienna. The Rhapsodic Quintet of Herbert Howells, for clarinet and string quartet, was suggested as a programming selection years ago by festival cellist Susan Moyer Bergeron, Forte said, and this year the musicians have found a home for it on one of the programs.

“It’s a really cool little piece,” Forte said. “We finally found a place to fit it in, and I’m glad we’re going to do that. I always like doing something with strings.”

Howells is perhaps best-known for his choral music, especially the Christmas standard Here Is the Little Door. His contemporary Malcolm Arnold, whose orchestral works celebrating the folk styles of the British Isles are among his most acclaimed, is represented here by an intimate piece, the Trio for Flute, Viola and Bassoon, written in 1942.

The second half of the program is devoted to Johann Nepomuk Hummel’s Military Septet (Septet No. 2 in C, Op. 114), a charming, entertaining piece for flute, clarinet, bassoon, trumpet, violin, cello and bass by a contemporary and friend of Beethoven who was a celebrated and popular pianist. Forte said the Hummel fills in the normal canonical spot that would normally be occupied on festival programs by a piece from the standard repertory.

“We did have some concerns that we didn’t have a Mozart or a Schubert or a Mendelssohn on Week One,” Forte said. “But we have Hummel, and we think that will do the trick.”

The second series of concerts, set for July 11-13, does offer Mozart, with his Oboe Quartet (in F, K. 370), written in 1781 and beloved of oboists everywhere. More British music is on this program as well, with the Suite for Flute, Violin and Harp of Eugene Goossens, who led the Cincinnati Symphony Orchestra from 1931 to 1946.

Dixon said the Goossens is a replacement for a trio by Jacques Ibert for flute, violin and harp that wasn’t going to be able to get enough rehearsal time. And as has been the case so many other times in this festival’s history, that switch-out has led to discovery.

“I couldn’t find a recording of this piece, but I listened to recordings of his other chamber works, and they’re really lovely,” she said. “So I said, ‘Let’s give it a try.’”

The Suite in the Spanish Style, for oboe, bassoon, trumpet and piano, by French composer Alexis Roland-Manuel, a student of Ravel, and the Sextet (in C, Op. 37) of Ernst von Dohnanyi, round out the program. Dohnanyi, a great Hungarian pianist and estimable composer, taught for years at Florida State University in Tallahassee and was buried in that city after his death in 1960.

The festival last programmed the Dohnanyi, which is scored for clarinet, horn and piano quartet, about 20 years ago and have been looking for a chance to bring it back. “It’s a meaty, expansive piece. There’s a lot going on in there,” Forte said. “It’ll be a good anchor for the program.”

The third program (July 18-20) contains the only music by a living composer, with La Viaggio Vita, a trio sonata for trumpet, violin and piano by James Stephenson, an American whose music has received several local performances in recent years. Stephenson wrote the work in 2010 as a wedding anniversary present for trumpeter Richard Stoelzel and his wife Valerie; it will be played here by Marc Reese, head of the brass department at Lynn University’s Conservatory of Music.

Also on the program is a wind quintet by Paul Taffanel, considered the father of the French school of flute playing, and the Quartettsatz (in D minor, D. 703), a string quartet movement by Franz Schubert. The program ends with the Nonet (in A minor, Op. 77) of George Onslow (1784-1853), an early Romantic French composer of British descent who wrote a staggering number of chamber pieces, including 36 string quartets and 34 string quintets.

The Nonet is scored for wind quintet, string trio and bass. “We wanted something with bass, and we wanted to do a big piece,” Dixon said, and the Onslow filled the bill.

The final weekend (July 25-27) features the Fantaisie-Concertante for clarinet, bassoon and piano by Brazil’s Heitor Villa-Lobos, a piece that made its way onto the festival through serendipity. Forte was on a trip to Spain with his family last summer, and found himself going to a music shop in Barcelona.

“There was a ton of music — dusty shelves and that sort of thing. So I found that piece, and thought ‘I’ll get it and bring it back for Michael (Ellert),’” Forte said. “And the next thing I know is he’s programmed it for the festival.”

Jean Françaix’s quintet for flute, harp and string trio also is scheduled, as is the popular Suite of Old Spanish Songs of Manuel de Falla, which has been arranged for any number of solo instruments; this version is for trumpet and piano.

Festival selections are often made by suggestions from the musicians, and longtime violinist Mei Mei Luo, who plays first violin in the Delray String Quartet, asked for the String Quartet No. 3 (in D, Op. 44, No. 1), of Felix Mendelssohn, which will end the fourth concert and the 23rd season of the festival.

But it won’t end the festival’s work. Last year, it launched a winter series of programs at St. Andrew’s Episcopal Church in Lake Worth and the Wold Performing Arts Center at Lynn University in Boca Raton. This year, the group returns to St. Andrew’s (where it is the ensemble in residence), and to Lynn, but to the smaller Amarnick-Goldstein Concert Hall.

“The Wold is really too big for us … I think the A-G will be better-suited to what we do,” Dixon said.

But while the St. Andrew’s and Wold concerts cover the south and central parts of the county, there was no north county venue for the fall series until Forte played in a workshop version of Ben Moore’s opera Enemies (which has its world premiere in February at Palm Beach Opera) at the Lighthouse ArtCenter in Tequesta.

“When I was there, I looked around and thought, ‘This would be a great place to play some chamber music,’” Forte said, and Lighthouse officials agreed. When the fall series begins (concerts at Lynn are set for Sept. 18, Oct. 16 and Nov. 6), there will be three venues, just like summer.

“All of our Eissey audience was sort of left out in the cold for our fall series,” Dixon said.

“Some of our Eissey audience even drove down to St. Andrew’s,” Forte added. “So this will make it a little easier for them, and it’s part of our mission statement to reach all of Palm Beach County.”

Although festival organizers are still working on different approaches for the fall series, and starting to think about something special for the 25th anniversary season, the core of what makes the chamber music concerts so distinctive remains: Fresh repertoire, engagingly played by veteran musicians who provide much of the backbone of the county’s classical music scene. And audiences know that.

The Palm Beach Chamber Music Festival opens at 7:30 tonight at the Persson Recital Hall, Palm Beach Atlantic University. The concert is repeated at 7:30 Saturday in the Eissey Campus Theatre in Palm Beach Gardens, and at 2 p.m. Sunday at the Crest Theatre in Delray Beach. Tickets are $25 apiece, or $85 for the four-concert series. Call 800-330-6874 or visit www.pbcmf.org to buy tickets or get more information.

Music: The very last concert Franz Joseph Haydn attended in his life was in March 1808, about a year … END_OF_DOCUMENT_TOKEN_TO_BE_REPLACED

Film: Major League Baseball culminates each season with the World Series, but to find the true … END_OF_DOCUMENT_TOKEN_TO_BE_REPLACED