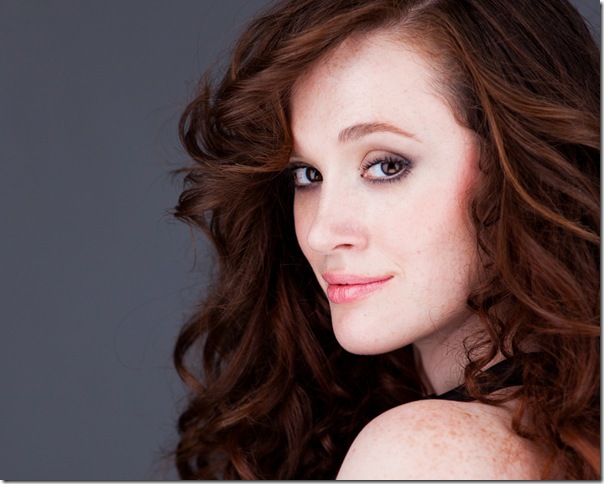 When she got the word, Bridgette Gan was ready to go.

As a member of the Palm Beach Opera’s Young Artists Program, Gan was preparing to cover the central role of Marie in the company’s production of Gaetano Donizetti’s La Fille du Régiment, which opens Friday. But Erin Morley, the soprano scheduled to sing the role in two of its performances, had come down with a cold, and it wasn’t going away.

“That first morning actually, Scott (Guzielek, director of artistic operations) had given me a call when I was in a rehearsal, and said ‘Erin is still not feeling well. Would you please be prepared to be on today for staging?’ And it’s already really a good thing in general that I’ve done covering quite a bit. I’ve done covering in Santa Fe … in fact, and this is not shocking to me at all, two apprentices went on at Santa Fe Opera for two people: one, unfortunately, was let go and the other was ill.

“So I’ve seen this happen right in front of me, and it’s like, ‘OK, that could be you.’ So I feel very blessed in that way, that there wasn’t this shock — ‘Oh, my God, I’m unprepared’ — because I know that kind of thing happens constantly. So I was ready,” she said, adding that because she was going to do an abridged family version of the show during the run, she had already learned the opera.

“And so I had a feeling, because she was not well, that when they called me in, this is what they were going to ask me about. So it was just kind of like, ‘We believe in your artistic abilities, we’ve seen what you can do, we really don’t think we need to bring anyone else in.’ And then it was ‘Can you do this?’”

Her answer was clear.

“Yes, absolutely. I want this opportunity,” she said. “It’s as simple as that. And now it’s about focus, hard work, and rest.”

Saturday night, Gan will go on as Marie in the second-cast performance of La Fille du Régiment, a delightful bel canto comedy from 1840. The work, which Donizetti set to a French libretto for performance in Paris, is an opéra-comique; like a contemporary American musical, it has dialogue between the arias and choruses.

La Fille du Régiment (The Daughter of the Regiment) tells the story of Marie, who has been raised since babyhood by a platoon of French soldiers in the Tyrol region of Austria. Now a beautiful young woman, she has fallen in love with a young mountaineer named Tonio, who once saved her from falling off a cliff. But an aristocratic stranger, the Marquise de Berkenfield, tells the regiment that Marie is actually her niece, and she takes her relative off to her chateau and the world of high society.

Marie doesn’t care for the life she now lives, and dreads her upcoming marriage to a nobleman the marquise has selected for her. Tonio arrives with the regiment and asks for permission to marry Marie, and is sent away by the marquise, but then Marie learns the marquise is actually her mother, and decides that she must obey her. The regiment arrives to stop the wedding, and Marie tells the assembled guests that she owes everything to the soldiers who raised her. The marquise relents, and allows her daughter to marry Tonio, leading to rejoicing by one and all.

Gan has a strong sense of who Marie is.

“I think she has a huge heart. She’s very fiery, and very smart,” she said. She also is devoted to the men of the regiment. “Right until the very last moments of the opera, where she says, ‘They’re the ones who guided my first steps. They were there for my sorrows and my joys.’ They mean so much to her.

“I like to think about it as individual relationships with these men … She has all these strong men that have shaped her life and encouraged her, and love her and look up to her. She has a lot of spunk, she’s very fiery, but she also has a lot of love in her heart for these guys.”

In Saturday’s cast Tonio will be sung by tenor Andrew Bidlack. In the first cast, which appears Friday night and Sunday afternoon, soprano Sydney Mancasola sings Marie opposite Taylor Stayton. Mezzo Judith Christin is the marquise, and bass-baritone Peter Strummer is Sgt. Sulpice. Broadway star Judy Kaye (Nice Work if You Can Get It, Cinderella) plays the non-singing role of the Duchess of Krakenthorp, whose son is promised to Marie. The show is directed by Dona D. Vaughn and conducted by Antonino Fogliani. 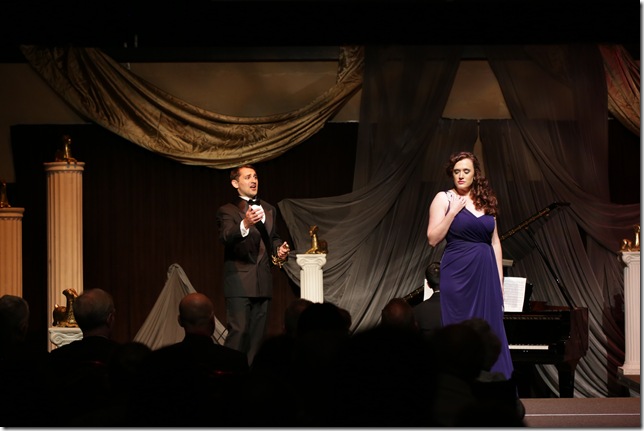 A self-described “theatrical animal,” Gan grew up in Pennsylvania, and studied at Westminster Choir College, where she worked with soprano Sharon Sweet, who is still her voice teacher. She got her master’s from the Maryland Opera Studio at the University of Maryland, and joined the apprentice program at Santa Fe Opera in New Mexico last summer. She has sung with Opera Theatre of St. Louis, Central City Opera, the Ash Lawn Opera Festival and the L.A. Pacific Opera Project, and won awards in numerous competitions including the Licia Albanese-Puccini Competition.

Marie is her first onstage bel canto role, and the 27-year-old singer is enjoying its more outgoing aspects.

“That’s one of the really exciting things about this style compared to something like Mozart: There’s a lot of room for a particular artist’s interpretation, depending on what their individual skills are in terms of the color of their voice, their flexibility,” Gan said. “Even Sydney and I do some similar cadenzas and ornaments and interpolations, but some of them we do differently depending on how we use our voice. That’s what I love most about this style: The full voice. How can you show off your voice in the best way to interpret?

“All of the cadenzas and ornaments, they’re not just music. They’re an expression of pain, or anger, or happiness, and they have to mean something,” she said. 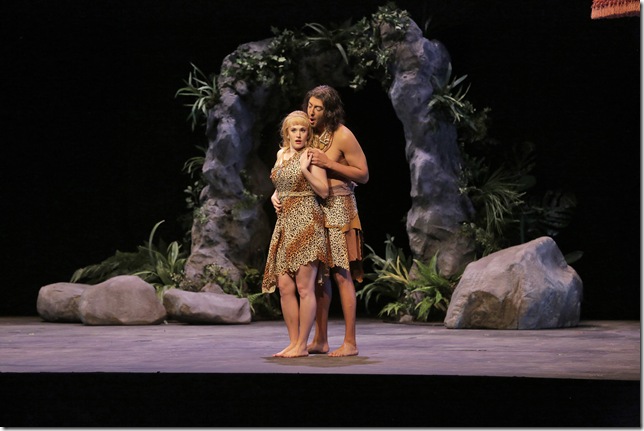 Gan has a large, powerful lyric soprano, which was heard to strong effect in December when she sang a sparkling version of Bernstein’s “Glitter and Be Gay” at the Palm Beach Opera’s outdoor waterfront concert, and she’ll return in the company’s 2015-16 season to sing the virtuosic role of Zerbinetta in Richard Strauss’s Ariadne auf Naxos.

This summer at Santa Fe Opera, she’ll sing the small role of Lila for the world premiere of Cold Mountain, Jennifer Higdon’s opera based on the popular novel of the Civil War by Charles Frazier, and cover Sandrina in Mozart’s youthful La Finta Giardiniera. She’s also scheduled to sing Musetta in a concert version of La Bohème with the Hartford Symphony.

Her dream role these days is Violetta in Verdi’s La Traviata, but she’s also looking at other career options in music over the long term. She spent eight years working as a performer for an event company, and has talked about forming her own with her fiancé, Scott Johnson, a singer also exploring work in arts administration.

“I have some of my own ideas about putting a spin on it with classical singers, from a full-out opera scenes program all the way down to combining some elements of music theater and jazz, because a lot of opera singers are very well-trained and versatile, and they can do different kinds of styles,” she said. “And I think there’s a lot of people out there, whether it be opera donors or Susie’s fifth birthday party, who really love hiring entertainment for these kinds of events.” 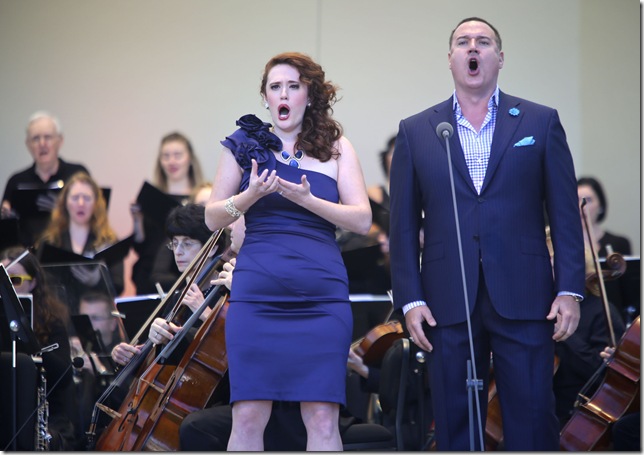 Gan has also been a licensed Zumba instructor for three years, and finds it hugely rewarding to motivate people for fitness and health.

“There’s a lot of these elements that I could see myself doing and incorporating. I’m not a black-and-white opera singer; it’s not my only love,” she said. “I think there’s lots of different ways to have a multi-layered musical and theatrical career … Knowing so many people in this business, you make of it what you want to make of it. If you’re a Zumba teacher, and also have a company that you work for, and also sing gigs and have a family, to me that sounds like a great life.”

Tall and flame-haired, direct and forceful, Gan makes an impression in person of self-assuredness that she will no doubt bring to the role of Marie. It goes hand in hand with her professional commitment to the music.

“It takes a lot of discipline,” she said. “But once you put it on its feet and once you’ve worked some things out with a coach or a teacher, and you’re able to be in touch with those moments and keep them in your mind, then it’s all about focus, focus, focus.”

Film: Playwright August Wilson began his chronicle of the African-American experience throughout the … END_OF_DOCUMENT_TOKEN_TO_BE_REPLACED

Film: Just in time with the opening of movie theaters in Palm Beach County comes the season’s most … END_OF_DOCUMENT_TOKEN_TO_BE_REPLACED

Music: The very last concert Franz Joseph Haydn attended in his life was in March 1808, about a year … END_OF_DOCUMENT_TOKEN_TO_BE_REPLACED