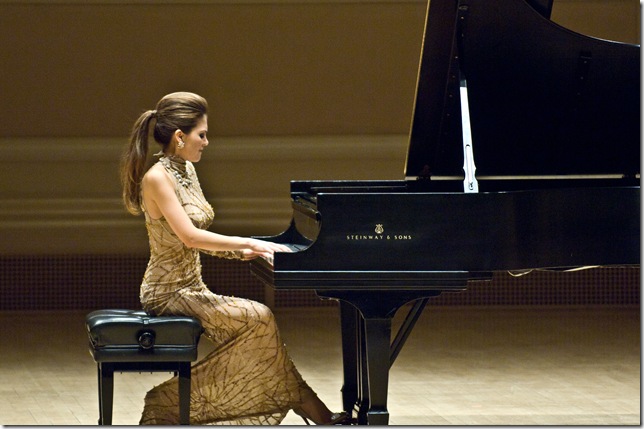 The great, the good and the fashionable gathered at Mar-a-Lago for a stunning night of music making by the Palm Beach Symphony and pianist Lola Astanova on March 18, their last concert of this season.

Astanova, tall, slim, very model-like in her black, short, backless, sequined, glittering evening gown, played superbly: as gifted as Lang Lang but without the showmanship, with an amazing, brilliant technique.

The other outstanding performance came from the orchestra itself, 80 musicians that sounded as good as the international visitors across the way at the Kravis Center.

It was Russian night at Mar-a-Lago, with music by Shostakovich and Rachmaninov. A generation apart, they lived in different worlds. Shostakovich, whose family supported the 1917 Revolution, was denounced by Stalin in the pages of Pravda in 1936. Rachmaninov at 44 got out of Russia when the Revolution began and never returned, ending his days in the United States in 1943.

The concert opened with Shostakovich’s Festive Overture (Op. 96), written in 1954 as a nod to the 37th anniversary of the Revolution. This exuberant work featured great work from the brass section as the orchestra headed into the overture’s rip-roaring ending.

Astanova was the soloist for Rachmaninov’s Rhapsody on a Theme of Paganini (Op. 43), composed in 1934. Astanova studied piano at the Moscow Conservatory and moved to the United States after the collapse of the Soviet Union. In 2012, she made her debut at Carnegie Hall to great acclaim.

Astanova played the familiar opening tune with a touch that was magical in its interpretation, demonstrating a superb technical ability. She carefully manipulated the lower keys as the melody built to a big climax, without resorting to heavy-handedness, or for that matter, heavy-footedness; her right foot never touched the “loud” pedal.

Throughout the work, she demonstrated more of that delicate touch, with runs in the upper keyboard seeming to float in thin air, and an easy command of the very difficult runs spread throughout the piece. This was virtuoso playing in the old style, lyrical and romantic.

Met by shouts of “Brava,” the audience gave Astanova an unusually warm reception, calling her back twice. It is all the more remarkable to know that the excellent orchestral work and sensitive conducting came about with only two rehearsals of this piece, suggesting a very high level of professionalism from everyone involved.

It would be interesting to see Astanova imitate a concert of Chopin given years ago by the Australian pianist Eileen Joyce, who chose a different-colored gown to match the moods of each section of the recital. A fashionista as well as a marvelous pianist, Astanova could pull that off with real effectiveness.

Last came Shostakovich’s Symphony No. 12 (in D minor, Op. 112), finished in 1961. Released from creative constraints by Khrushchev, Shostakovich still faced intense pressure to conform to Soviet ideals. He joined the Communist Party, a thing he’d so far not done, and dedicated his Twelfth to the memory of Vladimir Lenin, giving it the subtitle, “The Year 1917,” a safe, party-sanctioned approach.

And yes, within the symphony dedicated to Lenin there is a private code, known to few, acknowledging the heavy cost in human lives. Played through as one long movement lasting 38 minutes, the symphony — a masterpiece — rivets the mind as the time passes trying to find the famous code of humanity he sequestered in the music.

The symphony opens with low strings grinding 0ut a dirge-like melody describing “Revolutionary Petrograd.” Upper strings, then the full orchestra joins in, staggering along. The turmoil of 1917 is accurately conjured up as a series of strident orchestral blasts weighs in; in all this disturbing music Tebar had everything under control.

Gone were his flapping arm movements, yielding to sophisticated smaller gestures as he signaled a section’s entry with his left hand, keeping a firm grip on the beat, baton in his right hand. At times the double forte seemed about to explode; the music was terrifying in its intensity. “Raziv,” the place where Lenin planned the Revolution in the summer of 1917, figures as the next movement. A beautiful reverie from the oboe with bassoon obbligatos soaring in between makes the music reflective. The impression is of bureaucratic languidness.

The third movement, named “Aurora,” is for the first shots fired from the battleship of that name on Oct. 25, the day sailors attacked Tsar Nicholas II’s palace. Trombones fire away in gloomy, doom-laden phrases accompanied by shimmering strings. A single gong note signals the start of the offensive and introduces more plucked strings supporting a simple cello theme. Rumbling timpani of an unusual length leads to very agitated orchestral music that ends in a huge orchestral buildup.

The finale, “The Dawn of Humanity,” includes parts of a piece he wrote as a boy, “Funeral March for the Victims of the Revolution” (Shostakovich was 11 at the time). Beginning with what I can only describe as Stalinist bombast, the music is loud and vulgar, just like the man who liked to be entertained in the Kremlin until 5 a.m. every morning after orgiastic dinners, and who murdered peasant farmers in the millions who would not “collectivize.”

A stately dance from the violins takes center stage, now passed to the flute, accompanied by the other woodwinds. The tone is gracious. French horns break in with a hopeful message picked up by the trumpets. Double time violins wander around the scales as do the wood winds. A shrillness reenters the orchestral sound ended by three big drumbeats. A clashing exciting mix of brass and strings sounding like a distant peal of church bells brings the symphony to a magnificent rousing close — in what is perhaps the longest musical full stop since Beethoven’s Eighth was written.

In all of this, Tebar and the Palm Beach Symphony were magnificent. Kudos to conductor Ramon Tebar for expanding this 40-piece chamber group into a full-sized symphony orchestra for three of this year’s concerts. It is a worthy successor to the late Florida Philharmonic of happy memory.

With membership at $1,500 a single person, which not only includes tickets to their five concerts but meals served before or after each concert and other perks, one can but assume the general public cannot afford membership, and thus the orchestra’s growth to 80 players is threatened exponentially unless management attracts a wider audience.

While individual ticket revenues never cover the costs alone, donations are paramount. Whatever management has done to provide three big orchestras this year complements their skills in delivering quality to the public; it is hoped this level can continue.

Film: Playwright August Wilson began his chronicle of the African-American experience throughout the … END_OF_DOCUMENT_TOKEN_TO_BE_REPLACED

Film: Just in time with the opening of movie theaters in Palm Beach County comes the season’s most … END_OF_DOCUMENT_TOKEN_TO_BE_REPLACED

Music: The very last concert Franz Joseph Haydn attended in his life was in March 1808, about a year … END_OF_DOCUMENT_TOKEN_TO_BE_REPLACED