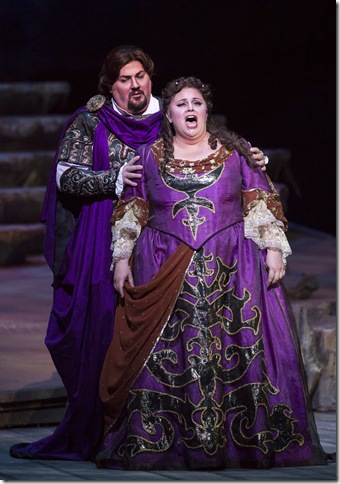 Palm Beach Opera’s last opera this season, Ariadne auf Naxos, was a singing triumph. The company brought together some of the freshest and best voices — all 16 of them — that ply their trade in the opera world today.

I heard the second-cast stars on Saturday evening, sitting among a very new but appreciative audience. The conversation around me was abuzz about next year’s opera choices, Butterfly, Rigoletto and The Pirates of Penzance.

Ariadne is a mishmash of an opera. Intentionally so. Composer Richard Strauss and his librettist, Hugo von Hoffmansthal, felt indebted to Max Reinhardt , producer of their opera, Der Rosenkavalier, for its success in 1911. They wanted to show their appreciation to this great man of German theater as a thank-you offering. Ariadne auf Naxos was the vehicle, and it was done as a combination of play and opera. The play was an adaptation of Moliere’s Le Bourgeois Gentilhomme, loosely done in commedia dell’arte style with clowns and a soubrette, followed by the opera, which harked back to early Baroque opera plots in which Gods descend from heaven to marry mere mortals. Play first. Opera second. It was a cumbersome arrangement.

The first Ariadne, performed in Stuttgart in 1912, lasted six hours and was impractical. Strauss walked away from it. But Hoffmansthal hit on a clever idea. Combine the play and the opera, set it in the home of the richest man in Vienna as an after-dinner entertainment. Alas, the dinner, running late, might have his guests miss the firework display he planned for 9 o’clock, so he orders both companies to combine their entertainments. Strauss came aboard, and shortened some of his music. This second version opened in Vienna in 1916, and the whimsy of it caught on, giving Lotte Lehmann her first outstanding success in the role of The Composer. She went on to be the darling of the opera world.

The opera opens with The Composer putting last minute touches to his music. This pants role was sung by mezzo-soprano Irene Roberts, making her debut in this part with a voice that was golden in tone and impressive when she needed to produce great sound. He realizes after much argument that for the sake of music, which draws all other arts to it, he can work with the commedia dell’arte players. The Music Master was sung by bass-baritone Mark Schnaible, making his debut with this company. His vocal output was steady and easy on the ear. 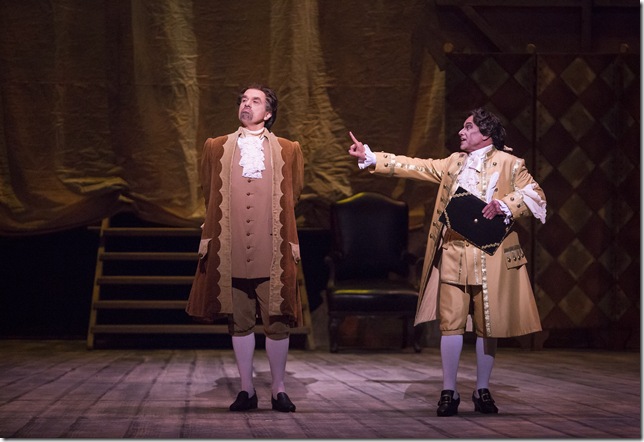 The non-singing role of the Majordomo, spoken by actor and former Met artist Anthony Laciura, was adequate. I wish his German delivery had been more deliberate as he tells the assembled casts his boss wants them to work together, “as professionals’’ so the guests can see the fireworks. Tenor John Easterlin as the Dancing Master, in charge of the comedy players, was superb. His dancing wasn’t too good, but his voice was that of a very fine comprimario tenor, clear as a bell.

The opera singers were headed by The Prima Donna, also Ariadne, sung by powerhouse soprano Amber Wagner in a debut performance that was unforgettable. There wasn’t a moment when we didn’t see her as a major talent. Her big, rich voice tackled Strauss’ long arced passages time and again with continuing freshness, filling the house, even to the “Gods,” an English term describing the back of the third balcony.

Cast as The Tenor — also Bacchus — was tenor Jeffrey Hartman, also making his debut. He’s a mixture of the Captain from Flying Dutchman and a Handelian God from the Baroque period when, by using machinery backstage, he appears to drop down from the heavens. Hartman bravely delivered his difficult high tessitura role in commanding style, but the dizzying heights Strauss asks of The Tenor strained his vocal chords just two bars from the end of his last aria.

The three wood nymphs were beautifully sung by three of this year’s young artists : Jessica Fishenfeld, soprano, whose lovely rounded tones were delicious as Najade. Soprano Liana Guberman sang with a delicacy and poignancy and with a beautiful timbre as Echo. And Fleur Barron, a wonderful mezzo-soprano, carried the trio with lovely penetrating tones they sang “Sweet Bird” pitched high in the register. Their voices blended perfectly as they draped themselves in sexy positions over rocks, caves and stairs, looking adorable. The Wig Maker was nicely sung and performed by baritone Jason Duika. 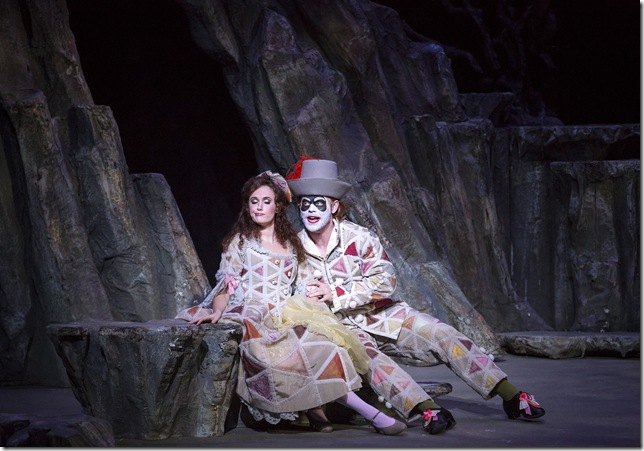 he commedia dell’arte players were led by Bridgette Gan as Zerbinetta. Gan is a soprano of rare talent who reminds me at times of the other coloratura gifted with such flexibility of voice, Joan Sutherland. On Saturday, however, she had vocal trouble and got through on half-power.

Her four boy actors were the delightful Kenneth Stavert, a rich baritone who sang Harlekin with great aplomb and acting chops aplenty. Tenor Robert Watson as Brighella, who got his body into crazy tangles for no reason, had a voice that came across strongly. Andrew Bogard as Truffaldin has a lovely ringing bass and he won our hearts with his shy antics. Tenor Spencer Viator sang Scaramuccio with gusto sounding very confident, and rolled about the stage at every opportunity. In total, there were nine current Young Artists and three former Young Artists in this cast, which speaks very highly for the training program at Palm Beach Opera.

The distinguished conductor, Andreas Delfs of Germany, kept the opera moving along nicely, giving clear signals to the singers and making the 36-piece pit orchestra sound very good. The sets, on loan from New Orleans Opera, were designed by Wofram Skalicki. The lighting design was by SeifAllah Salotto-Cristobal. I would have preferred better illumination at the start of the first act; one could not see the expressions on the singers’ faces, even with opera glasses.

The delightful colorful costumes came fresh from Malabar in Toronto, and wigs and make up were by Kathy Waszkelewicz. Brett Filey’s English supertitles made understanding this messy plot that much easier, even raising a few laughs on amusing occasions. Unfortunately, the comedy succumbed to the opera portion; Strauss didn’t cut it enough. German humor from 1916 has little or no meaning for today’s audiences.

However, the rich orchestration, Strauss’s gift of creating the long melodic line, colorful costumes and the sheer absurdity of the plot should carry Ariadne into the next century. I certainly hope so. Directed by Daniel Witzke it really needed a lighter touch and more imagination in giving the cast bits of stage business to help create and identify their characters.

Music: The very last concert Franz Joseph Haydn attended in his life was in March 1808, about a year … END_OF_DOCUMENT_TOKEN_TO_BE_REPLACED

Film: Major League Baseball culminates each season with the World Series, but to find the true … END_OF_DOCUMENT_TOKEN_TO_BE_REPLACED