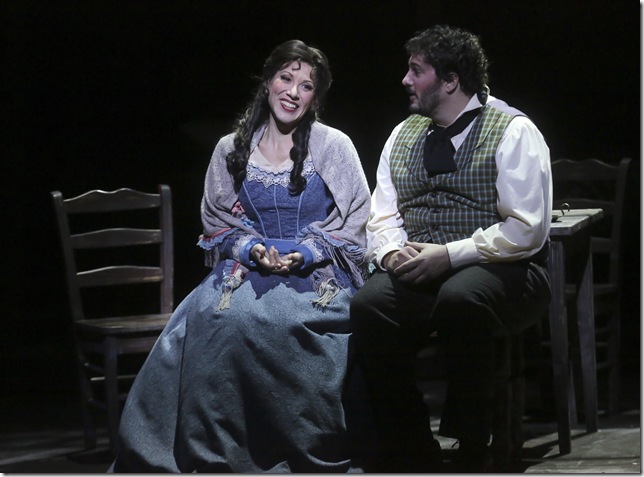 I heard the second cast of Palm Beach Opera’s very fine production of Puccini’s La Bohème on Saturday. The Kravis Center was packed to capacity for this, the first opera of the season.

It was good to hear from the government last week that the arts in America now account for 4.3% of our gross domestic product. Palm Beach County’s lively arts programming surely contributes more than its fair share to the GDP.

Director Fenlon Lamb, of Maine, who last year directed an exceptionally good one-hour version of Ned Rorem’s Our Town for Palm Beach Opera’s Young Artists, chose to low-key the stage action and let the music do the talking. Gone were the ballet dancing hijinks associated with the four male students, Rodolfo, Schaunard, Colline and Marcello in the first and last acts. And Parpignol, the toy seller, pushed his way into the crowd in Act II, instead of leading a parade of young children across the stage.

It was a beautiful ensemble performance, the likes of which the old New York City Opera was famous for under the late and revered team of Beverley Sills and Julius Rudel. The Italian conductor Daniele Callegari led the 70-piece orchestra in the pit with great sensitivity to Lamb’s conception of a subdued interpretation. Together, they gave this 1896 opera fresh legs, setting a very cultivated tone for other directors to follow.

American audiences are mature enough to understand the subtleties and understatements hinted at during a performance; in-your-face action should be left to comedy or opera buffa. One might take issue with the darker tones of the lighting direction by Ron Vodicka, especially the follow spots on the lead singers whose faces could not be discerned too clearly. It is a melancholy work, and in all other situations the color schemes worked well with the set, designed by the distinguished and highly regarded Peter Dean Beck.

The two-story set served three different scenes admirably with slight adjustments. The Bohemian boys’ cold attic rooms, Café Momus in Act II and the tollgate at the Barriere d’Enfer in Act III. Greg Ritchey’s opera chorus was superb in Act II, and Lamb in her new stage direction managed the crowd movements wonderfully well considering how cramped the space looked from where I was sitting. 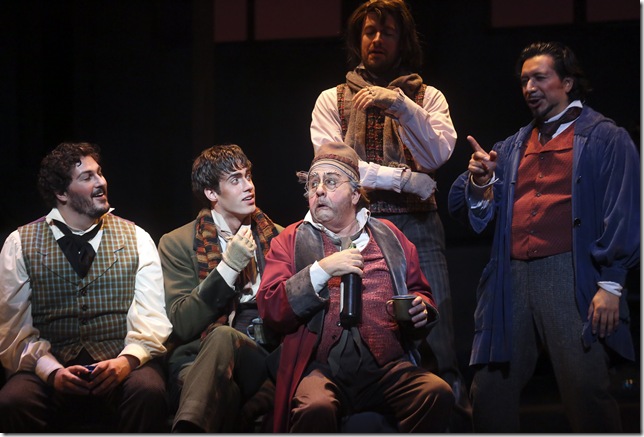 Making his Palm Beach Opera debut was Anthony Kalil, from Indiana, in the role of Rodolfo. He has a nicely placed tenor voice, a little on the light side, which is not to say he was inaudible, only that in spinning out his high notes, one would have wished for more volume. His singing of “Che gelida manina” was in keeping with Lamb’s conception.

Mimì was sung by soprano Eleni Calenos from Greece, who sounded lovely in her first-act meeting with Rodolfo. Her duets with him were very special; both singers blended beautifully. Hers was a convincing and believable performance. Again, nicely understated.

Minnesota soprano Ellie Dehn was delightful in her debut role of Musetta, the coquettish philanderer who loves Marcello but gets her older lover Alcindoro to pay the students’ café bill.  Her thrilling voice and sparkling personality contrasted nicely with Mimì’s quiet demeanor. Mexican baritone Luis Ledesma was excellent as Marcello, handling his courtship of the fiery Musetta delicately.

A former Young Artist in 2014, Tobias Greenhalgh returned to sing the role of Schaunard. A Rochester native, he certainly made his mark with a very fine performance. He has a lovely baritone delivery, a little on the dark side but quite flexible in his lovely solo work. In Act IV, Lamb has him kneeling at the head of Mimi’s makeshift bed: a guardian angel waiting to take her spirit to higher places, as it were. A very subtle touch.

Evan Boyer was an excellent Colline. A bass singer from Kentucky, he sounded wonderful, especially in the last act when he gives up his overcoat to buy medicine for Mimì. His “Vecchia zimarra” won a round of applause at a difficult time in the opera when Mimì is dying. Cincinnati baritone Thomas Hammons made his debut in the dual roles of Benoit and Alcindoro; an admirable character actor, he was good in both. Young Artist Nicholas Nestorak sang Parpignol.

Of all the Bohème productions I have seen, this one will stay in the memory longest for its very fine ensemble work, the subtle direction of Fenlon Lamb and the way in which the orchestra was conducted and how well the players responded to Daniele Callegari’s baton.

All the arts — music, singing, acting, scenery and costumes — were drawn together as one in a  beautifully understated performance of the most popular and most performed opera in the world.

Film: Playwright August Wilson began his chronicle of the African-American experience throughout the … END_OF_DOCUMENT_TOKEN_TO_BE_REPLACED

Film: Just in time with the opening of movie theaters in Palm Beach County comes the season’s most … END_OF_DOCUMENT_TOKEN_TO_BE_REPLACED

Music: The very last concert Franz Joseph Haydn attended in his life was in March 1808, about a year … END_OF_DOCUMENT_TOKEN_TO_BE_REPLACED