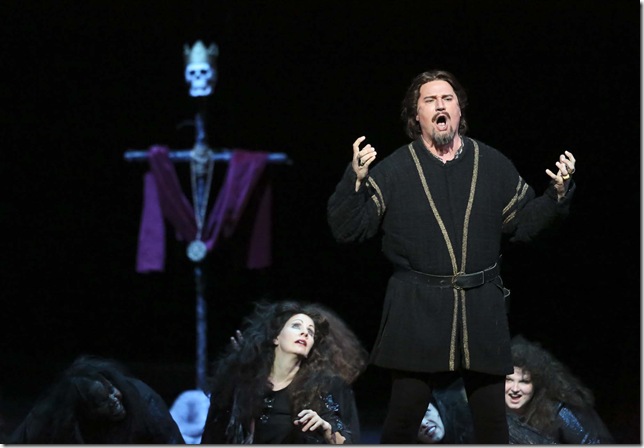 Even though the Giuseppe Verdi of Macbeth is not the Verdi of Don Carlo or Otello, one hears the earlier score today with a shock of understanding why this composer’s work seized the ears of his contemporaries: It is bold, fierce and unrelentingly exciting.

It helps if the performance in question of the opera does it justice, of course, and fortunately, Palm Beach Opera’s reading of this inspired-by-Shakespeare tale proved to be an engaging opener for the company’s 52nd season.

Staged in relatively simple but effective style by the veteran French opera director Bernard Uzan, Macbeth dispensed with the ballet Verdi added for the opera’s 1865 Paris version, and drew most of its atmosphere from a three-part set on which the women’s chorus of weird sisters slithered and skittered as they gave out their prophecies of coming political events in 11th-century Scotland.

Hung above the singers in some scenes was a forest of long needles that suggested discomfort and menace, and when one of them was lit all in red, it became the dagger that Macbeth sees before he does away with King Duncan. The slain Banquo was illuminated in bright green for his reappearance as a ghost, and with the cast costumed in cold-climate period aristocratic wear, the production had a dark, spare look that set the tone but stayed well out of the way of the singers.

And the singing was very fine on Sunday afternoon, plus there were a couple good vocal discoveries to boot.

As Macbeth, the American baritone Michael Chioldi, returning to West Palm Beach for the fifth time in 10 years (he was Germont last year for La Traviata), gave a compelling, intense performance. His voice has darkened in recent years, and that added heft and seriousness to his portrayal, which was a debut role for him this past weekend.

From his first entrance, Chioldi’s voice was bronze but youthful, and when it came to his fine reading of the great Act IV aria Pieta, rispetto, amore, that quality made him sound like a vigorous man cut down in his prime rather than a haunted, shaken shell. He sang beautifully throughout the opera, and this is a good role for his voice type and physical stature. It would be good to see him in this part again, but with a much fuller staging, so that he could explore the acting side of the role more; this bare-bones version seemed to hem him in. 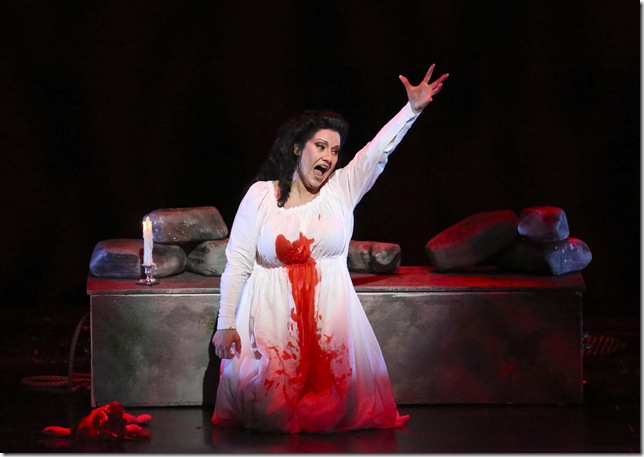 His voice was also a good blend for his Lady Macbeth, sung here by the Hungarian soprano Csilla Boross, last seen at Palm Beach Opera as Abigaille in Verdi’s Nabucco. She was fiery and forceful, and her large, sharp-edged voice had plenty of stamina. Boross did exactly what the role calls for when we first see her in the letter scene (Nel di della vittoria), which is to declare in her singing what this formidable character is all about. She had to sing it in front of a scrim, and therefore essentially on a bare stage with nothing but a piece of paper in her hand, but the muscle she brought to the aria made that irrelevant.

She was equally exciting in the sleepwalking scene, pacing the aria firmly and carefully, building a steady arc for it as she rubbed her hands and wandered across the stage. Boross pushed some of her top notes in this aria and a couple places elsewhere to the edge of shrillness, but that was appropriate for the character. Again, it would have been good to see her do this role, which is a regular part of her repertory, in a production that gave her more to do, even when not singing. One wanted the Macbeths to be a more frequent presence so that the denouement, even in a play that everyone knows, would be more fulfilling. 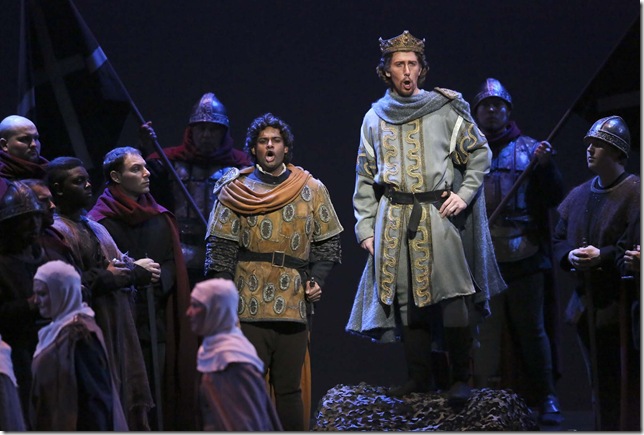 The big surprise of the afternoon was the Macduff, the American tenor Sean Panikkar, who also is a member of the operatic trio Forte (which will appear in March at the Festival of the Arts Boca). His Ah, la paterno mano was thrilling in every way: This is a very big, enormously exciting voice with a classic Romantic tenor sound. He is now in Britain doing Rodolfo in La Bohème, and I’ll bet audiences there go mad for him. The large house at the Kravis certainly did, and his ovation at the curtain was easily the loudest.

The Welsh bass Richard Wiegold was a solid, impressive Banquo who managed to bring real lyricism to his vocal appearances; his instrument is deep and creamy, but not so deep that it doesn’t have some pretty baritonal quality. The American tenor Joseph Dennis, a Palm Beach Opera Young Artist, was a good Malcolm, with better-than-average acting chops, but while his voice is clear and his musicianship precise, he had the proverbial hard act to follow by having to come in after Pannikar.

The other Young Artists on stage did their parts creditably, particularly bass-baritone Peter Tomaszewski as the doctor and mezzo Rachel Arky as the lady-in-waiting, both of whom held their own as the horrified onlookers during Lady Macbeth’s mad scene. Best of all was soprano Claire Kuttler in her few moments as the crowned child of the witches’ prophecy; it’s a lovely, well-rounded voice that will be a pleasure to hear in future productions.

The Palm Beach Opera Chorus, ably drilled by Greg Ritchey, has a key role to play in this opera, from the witches to soldiers, to exiles bemoaning what’s happened to their country under the bloody Macbeth. And they were quite good, with the women especially so as the witches. The chorus never sounded particularly powerful, but they were always strong, and in the Patria oppressa chorus, they sang with an admirable dynamic range; it’s rare to hear good hushed ensemble singing except in choral concerts, and the air of weariness the group brought to this music was welcome.

Conductor David Stern led an excellent Palm Beach Opera Orchestra, which sounded splendid all the way through, with all the sonic palette Verdi calls for, from murmur to shout. A lot of the credit for that has to go to Stern, who led the music masterfully. In the big Verdian climaxes, with shrieking winds and pounding brasses, he was like the conductor of a steam engine, letting out power and heat gradually but inexorably. He deserves a return engagement, and perhaps more than that.

Palm Beach Opera presents its first One Opera in One Hour presentation tonight at the Harriet Himmel Theater at CityPlace in West Palm Beach. Ned Rorem’s Our Town will be presented in an abridged version; librettist J.D. McClatchy will hold a question-and-answer session afterward. The free performance begins at 7:30 p.m. The company’s next mainstage production is Rossini’s The Barber of Seville, on Feb. 21 and 22, at 7:30 p.m. (also on the 22nd, a children’s performance at 1 p.m.), and at 2 p.m. Feb 23, all Dreyfoos Hall in the Kravis Center. Call 833-7888 for tickets or more information.

Film: Playwright August Wilson began his chronicle of the African-American experience throughout the … END_OF_DOCUMENT_TOKEN_TO_BE_REPLACED

Film: Just in time with the opening of movie theaters in Palm Beach County comes the season’s most … END_OF_DOCUMENT_TOKEN_TO_BE_REPLACED

Music: The very last concert Franz Joseph Haydn attended in his life was in March 1808, about a year … END_OF_DOCUMENT_TOKEN_TO_BE_REPLACED