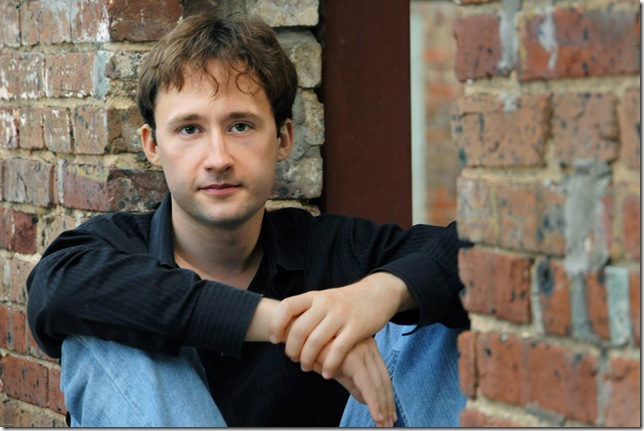 Sunday afternoon’s concert by The Symphonia Boca Raton had a loose and handmade feel to it, with decent performances by the group of some unusual repertoire, and a standout appearance by a guest soloist.

Alexandre Moutouzkine, a Russian-born pianist, was the soloist for two works, the rarely heard Ballade (in F-sharp, Op. 19) of Gabriel Fauré, and the Aubade of Francis Poulenc. Moutouzkine is a wonderfully fluid pianist, with tremendous finger independence that stood him in good stead for the Fauré’s complex inner voices and the Poulenc’s hyper-Jazz Age effusions.

Leading the Symphonia, which has no permanent conductor, was another guest, the Hartford Symphony’s Carolyn Kuan. She led the Symphonia with authority and an expressive left hand that she used for most of the colors she wanted to bring out.

The Fauré Ballade, which Liszt famously dismissed as too difficult, is heavily indebted to Chopin but has more elusive harmonies, as does much of Fauré’s infinitely subtle piano music. Like Chopin’s concerti, this 20-minute work is also modestly orchestrated, with the instrumentalists in a supporting role.

Moutouzkine showed total command of the keyboard from the beginning, with a pure, singing tone in the nocturne-style opening section, and remarkably strong and clean contrapuntal lines in the second segment. In addition to tossing off the passages of filigree with ease, he gave this gentle music shape and an emotional arc; you could feel the drive of the faster sections and luxuriate in the serene landscape he constructed in the slower, poetic passages.

You need that in pieces as modest as the Ballade, but it’s even more important in a choppy work like the Aubade, which after all was designed to be ballet music. The first extended piano portion of this unusual piece, the Toccata, was played with frenetic, almost cartoonish speed, and the A major rondo (Diane et ses compagnes) moved along briskly, but with careful attention to the gracefulness of the tune.

The same care and sparkling virtuosity were in evidence through the rest of this wildly eclectic piece. It could probably have used some more rehearsal to make it hang together a little better and clear up some of the roughness in the Symphonia, though overall this was a charming and enjoyable performance.

Moutouzkine played an encore, one of the many jazz etudes by the Russian composer and jazz pianist Nicolai Kapustin. He is a hugely popular composer for the audience that likes jazz crossover like Claude Bolling or Jacques Loussier, though Kapustin is far more aggressive. Moutouzkine played with brilliance and astonishing control in this blizzard of bebop, making a good case for a piece that doesn’t really deserve it. But he is a splendid pianist; his one drawback is that he might be too facile a finger acrobat, and he will need to make sure he puts that to good use and resists the temptation to just dazzle. 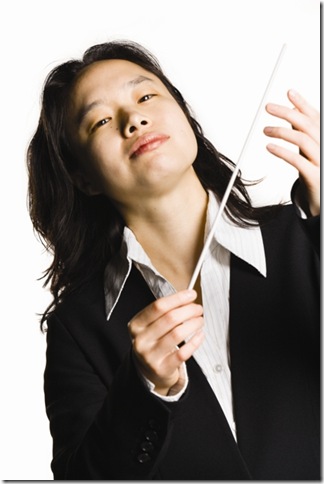 The concert opened with early Copland, his Music for the Theatre. It’s a canny reflection of the music of the 1920s as filtered through a man with French modernist study under his belt, and in addition it has hints of the populist style that would make him not just a respected American composer but a beloved one.

Here again, things could have been a little tighter, but there was good solo playing from the woodwinds, particularly Jeff Apana’s English horn solo in the Interlude, which he played with a warm, fat sound that filled the Roberts Theater. (Kuan did a nice onstage interview with him about his instrument during a set change to bring on the piano for the Fauré.) The performance had the right spirit, in any case, cheeky and lively.

The concert closed with the Symphony No. 38 (in D, K. 504) by Mozart, known as the Prague Symphony. Kuan led this well, with good attention to its muscle in the first movement and a generous, wide-open feel for the slinkiness of the second movement. The finale got off to a very brisk start, but the Symphonia was not able to maintain it to the end, and things were slower by the final bars.

But there was much to like about this performance, mostly its crispness in the service of the Mozartean idiom, in which a chamber orchestra gets closer to the actual size of groups the composer would have known. You can hear the forcefulness of Mozart’s writing more clearly in these smaller groups, and the Symphonia gave the work a strong, engaging read.

Film: Playwright August Wilson began his chronicle of the African-American experience throughout the … END_OF_DOCUMENT_TOKEN_TO_BE_REPLACED

Film: Just in time with the opening of movie theaters in Palm Beach County comes the season’s most … END_OF_DOCUMENT_TOKEN_TO_BE_REPLACED

Music: The very last concert Franz Joseph Haydn attended in his life was in March 1808, about a year … END_OF_DOCUMENT_TOKEN_TO_BE_REPLACED