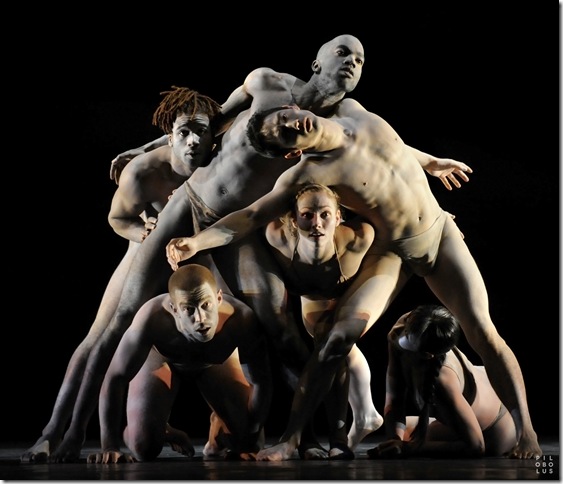 Pilobolus ﬁnished off the Duncan Theatre’s 25th anniversary season in a way that few dance companies can.

Engaging and satisfying on so many levels, one can clearly sense the unique creative force required to present such a satisfying program. The company functions as a collective, collaborating to create the works that are performed, and you can feel the hours they spend in the studio interactively improvising together.

The company is seven strong, with six dancers appearing onstage at a time. All seven dancers were outstanding. As they intertwined and connected in extraordinary ways, one could not tell which dancer was which and indeed, it seemed as if that was not important. It was more important to see them as shapes and forms not as individuals; a true collective.

The company was founded by four male gymnasts from Dartmouth College who were later joined by two females. This combination of four men and two women has been the trademark for over 40 years and nearly all the works are created for six dancers. But what is truly amazing that those dancers in 1970 established a creative environment that was ground breaking in its day and, despite the turnover of dance artists as the years passed, the company stayed true to its creative mission and process.

Now, all these decades later, the company not only survived the years but thrived brilliantly. Today, they collaborate with a wide variety of outside people and their playful imagery is just as engaging and inventive as ever. In the 2007 Academy Awards, the company performed silhouetted behind a white screen, creating with their bodies memorable scenes and logos for various movies as well as the famous Oscar statue. 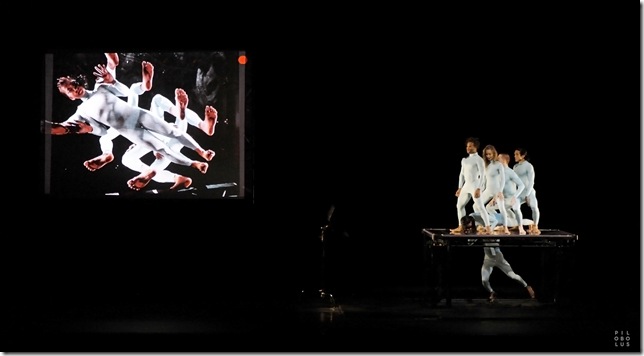 The company performed five works on the program at the Duncan Theatre on March 23 and 24. Sextet 2012, the newest work and wisely the ﬁrst on the program, was ﬂat and disappointing, with the exception of a mesmerizing duet with a white ball. The dancers maintained close contact, rolling the ball from one body part to another as they caressed and lifted each other and scattering images of a protected entity, an egg or an embryo, whose care held them together.

All Is Not Lost (2011) was a visual plethora. This was an inventive and delightful work that incorporated dancers’ movement with video images projected on a large onstage screen from an onstage video camera shooting up from under a transparent platform from which the dancers moved over, under and around. The delightful images of swimming amoebas and of a marvelous human kaleidoscope were gently humorous. It was short, it was clever, and it left one hungry for more.

Korokoro (2011) which means “rolling” in Japanese, was a recent collaboration with these company dancers and choreographer Takuya Muramatsu. And indeed it started with a lot of rolling — bare-butted rolling — but it wasn’t until the duets started that the work began to gel. Here the dancers became more like humans, more upright. The stark, colorless staging was reversed as the group was drenched in slowly changing color projections and the sound of single piano notes seemed like heartbeats.

As a group they seemed to be moved by outside forces as they were pulled from side to side with staccato movement. The color disappeared as they fell to the ﬂoor and reemerged tall on the shoulders of one and other as Homo erectus. 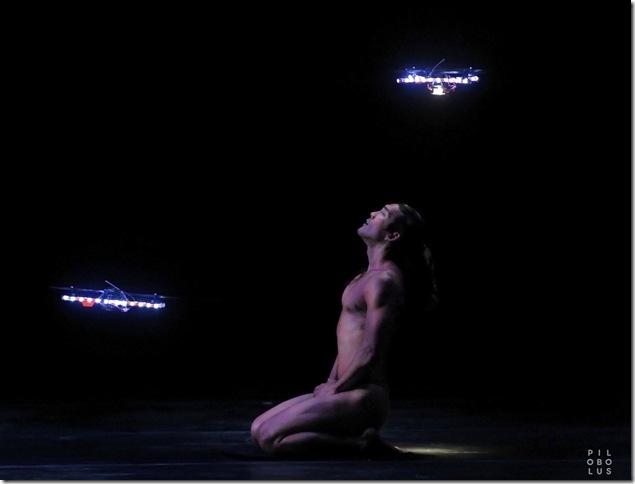 Seraph (2010), set to a Schubert piano trio movement, is a deceivingly simple work but is extremely high-tech. Matt Del Rosario encounters an object shaped like a cross on the ﬂoor. As lights blink on the object, he responds by communicating with a ﬂashlight. The object is a “quadroter,” which takes to the air and “dances” around Del Rosario.

Created in collaboration with the MIT Distributed Robotics Laboratory, the work has a fable-like quality as man and machine bond. Humor is interjected as a second and “jealous” ﬂying robot entered, complete with ﬂashing red lights chasing the man off stage. Then, there was a moment where the two robots do a duet alone onstage ﬂying through the air — a mesmerizing “dance” even though there were no dancers onstage.

The complicated maneuverings of the ﬂying robots were mastered by of two dancers, Shawn Fitzgerald Ahern and Jun Kuribayashi, who controlled them from off stage. Talk about thinking outside the box!

Day Two, a classic Pilobolus work, ﬁnished the program. This timeless work is just as memorable as it was when it was ﬁrst presented in 1980, and it has become a signature piece for the company. It was choreographed by the company members of that time and was directed by founding member Moses Pendleton, who went on to form the equally inventive dance company Momix.

The title refers to the second day of the creation of the world, and the dancers transformed as they enacted the earliest forms of life through to evolution of sexuality in animals and man. The juxtaposition of images of archaic life forms with the still thoroughly contemporary soundtrack of Brian Eno and Talking Heads was terriﬁc, not to mention the ending, where the dancers burst out from under the dance ﬂoor and did their entertaining “slip-and-slide” bows in water.

Film: Playwright August Wilson began his chronicle of the African-American experience throughout the … END_OF_DOCUMENT_TOKEN_TO_BE_REPLACED

Film: Just in time with the opening of movie theaters in Palm Beach County comes the season’s most … END_OF_DOCUMENT_TOKEN_TO_BE_REPLACED

Music: The very last concert Franz Joseph Haydn attended in his life was in March 1808, about a year … END_OF_DOCUMENT_TOKEN_TO_BE_REPLACED