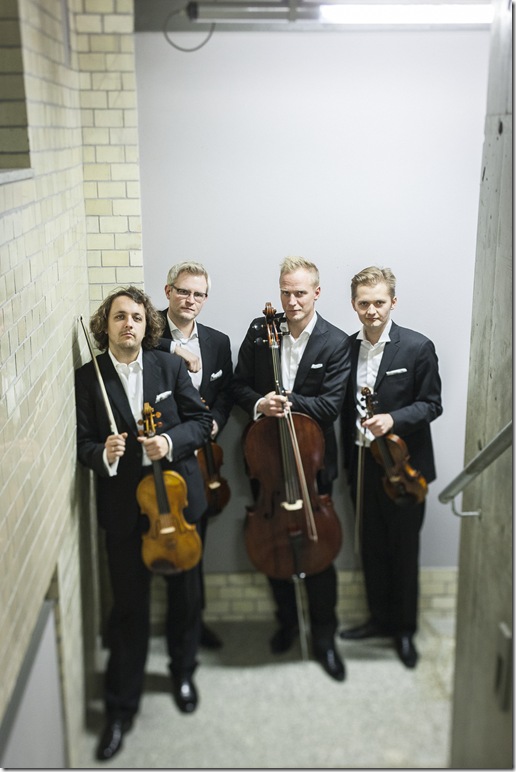 The last of this year’s fine crop of string quartets to play in Flagler Museum’s Music Series came from Poland.

Introduced by the museum’s new executive director, Erin Manning, the Meccore String Quartet, established in 2007, has won numerous awards for their innovative approach. Each member currently receives scholarships from the Polish Ministry of Culture and teach at the Paderewski Academy of Music in Poznan and the Chopin University of Music, Warsaw.

The Meccore opened its program March 8 with the fourth of the six Op. 18 quartets (No. 4 in C minor, Op. 18, No. 4), written between 1798-1800. Dedicated to his patron, Prince Franz Joseph Lobkowitz, they were published in 1801, and as one reviewer said on hearing the string quartets, ‘’Historically they are at once the final climactic masterpieces of the 18th century and the first, forward-looking ones of the 19th century.’’

Standing to play, the Meccore Quartet released a field of high energy with a refreshing sound to match. Placing the cellist on a 2-foot-high stand, he ranked third from the left, an unusual but effective position, getting the best from all players for the soaring music Beethoven opens with.

Indeed, Karol Marianowski’s cello solos were brilliantly played. After the coda, the bright recapitulation led by the excellent first violin of Wojiech Koprowski has the lower three players accompanying with continual rising scales which were very attractive.

The second movement opens with a fugue-like second violin played by Jaroslaw Nadrzycki. It is heavenly music that Beethoven spins around this one tune, delicate but not slow. Mysterious wanderings resolve into a fourth fugue with contrapuntal imitations occurring time and time again. Such fine playing from all four instrumentalists drew us in.

A darker mood opens the third movement, Allegretto, as racing crescendos lead to a stately minuet. The last movement is a spirited rhythmic rondo. With a brilliant attack, the four men launched into flexible techniques, demonstrating all six surprise stops Beethoven introduces. Expecting a seventh stop, the master tricks the listener and lets the music continue, ending on three great long chords.

Next up was Joseph Haydn’s String Quartet in C major (Op. 50, No. 2). Haydn’s approach in this opus has longer movements, bigger musical surprises and more intense humor than his earlier attempts of Opus 33.

Opening quickly, the Vivace is sweet music on the ear. Dancelike in its structure, it’s quite theatrical. Each instrument negotiates its music brilliantly through beautiful harmonic digressions. The second movement, Adagio, has a long solo opening from the second violinist to staccato accompaniment. The lovely viola cantabile, as played by Michal Bryla, sounded soothing and peaceful.

A strident first violin knocks out a very high tune with ascending and descending scales that are quite thrilling in the third-movement minuet. With clever pauses and a fine thematic line Haydn grips our imaginations. The finale (Vivace assai) has a playful effervescent opening, so fast that each player watches the others very closely. A folk tune is introduced from Croatia and there’s much contrapuntal writing as the cello sound anchors the busy violins and viola. Luckily, the cello gets the last notes in a glorious ending.

After intermission, the Meccore Quartet made a leap of significance, choosing Jean Sibelius’s only published string quartet, written in London straddling the years 1908-1909. He had written three before in his violin playing youth but withdrew them. His String Quartet in D minor (Op. 56) was given the name ‘’Inner Voices.’’

After a life-threatening illness in 1908, his doctors forbade cigars and liquor and put him on strong narcotics. Once released from them, Sibelius said he thought and felt with a new intensity. The five-movement quartet reflects it.

A slow earthy opening from the first violin, now played by Jaroslaw Nadrzycki, is answered by the cello. A growth pattern begins similar to that of his Second Symphony. After the intense buildup, the pause is most effective leading to the next movement. Buzzing strings remind one of Elgar’s opening to his Introduction and Allegro for Strings. It’s a very short piece, but the similarities are there.

The third movement (Adagio di molto) is in slow free form but lyrically very expressive with complicated winding melodies. The theme grows stronger and higher with crescendos of a rhythmic nature. A unison statement from all four players ends this dramatically intensive movement. The fourth movement (Allegretto ma pesante) opens with a solo violin’s lyrical tune accompanied by busy scales from the second violin. Hints of the last movement from Sibelius’ Symphony No 2 appear now and then.

The Finale (Allegro) is folksy in its derivation. An almost symphonic sound is led off by the two violins at speed, suggesting Mendelssohn’s Midsummer Night’s Dream scherzo but using a modern musical idiom, which brings this forceful movement to a close. Rousing applause met their playing, after which the Meccore offered a fine encore: The second movement of Debussy’s String Quartet.

Film: Playwright August Wilson began his chronicle of the African-American experience throughout the … END_OF_DOCUMENT_TOKEN_TO_BE_REPLACED

Film: Just in time with the opening of movie theaters in Palm Beach County comes the season’s most … END_OF_DOCUMENT_TOKEN_TO_BE_REPLACED

Music: The very last concert Franz Joseph Haydn attended in his life was in March 1808, about a year … END_OF_DOCUMENT_TOKEN_TO_BE_REPLACED