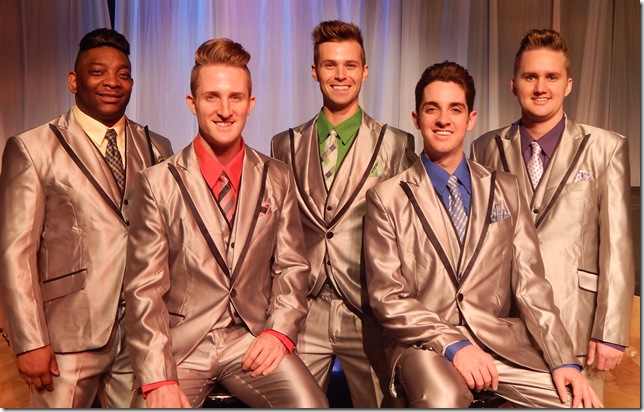 Broward Stage Door Theatre welcomes 2016 with a show featuring a jukebox-style compilation of tunes that literally share a hairline theme. All the songs were hits by vocalists who sported pompadour hairstyles or coiffures of that ilk.

Pompadour, subtitled Hits, Harmony & Hairspray, is a whimsical array of songs — full tunes and portions thereof — vocalized by five young male singers who do a masterful job of recalling Top 40 melodies, mainly from the 1950s through the 1970s, though some more contemporary songs slip in. The show opened the day after Christmas and runs through Jan. 31.

The roster of 65-plus songs was conceived and collected by Broadway-experienced director Michael Leeds, along with choreographer and co-director Kevin Black. Leeds was nominated for a Tony Award for a similar songbook musical, Swinging on a Star.

“A few years ago, I was out browsing through CDs and it was surprising to see the number of current male artists who sported the classic pompadour,” Leeds said. “I started thinking about the many singers through the years who’ve worn that style.”

“After some research, I discovered that the pompadour originated as a symbol of both beauty and rebellion, and its lineage includes some of our greatest artists and groups spanning decades of music.”

Many area theaters seem to be emphasizing musicals this season. In fact, nine of Broward’s dozen shows this season are either full-blown musicals or revues like Pompadour and its kissing cousin, Promises, Promises, also a Leeds-Black production. It returns to the Broward Stage starting Feb. 19.

Not all the stars of Pompadour are visible. Singers Brandon Godfrey, Preston Grover, Anthony Massarotto, Stephen Millett and Jay Wilkinson are front and center while voice-overs trickle in from Shane and Amy Tanner, Clay Cartland, Stephanie Genovese, Christina Groom, Nicole Kinzel and Allie Pattison. A pre-recorded track put together by orchestrator Manny Schvartzman keeps the main music flowing nicely while the front guys augment it with a piano, two acoustic guitars and a sax.

Michael McClain has crafted a neat set, with two massive blow dryers, one on either side of the stage, connected at the top by a comb. The show gets a big boost from appropriately animated graphics crafted by Frank Hernandez at Atom Phly Media and shown on an LED screen at the rear of the stage. 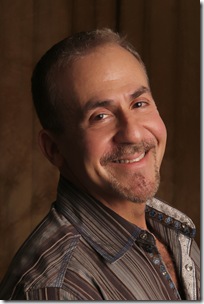 “I divided the show into seven segments, the same way I had done with Swinging on a Star,” said Leeds. “But instead of a journey through time, it’s a journey through the different musical styles.” The musical cubicles spotlight rockers, teen idols, bands of brothers (i.e., Righteous, Isley, etc.), Latin lovers, good ol’ boys, crooners and chart-topping groups.

The production covers a lot of territory and different musical styles.

The five vocalists do an excellent job delivering song after song with few breaks for dialogue. And the energy level is off the scale as the performers occasionally run up and down the center aisle to serenade the audience.

Pompadour kicks off with the guys tackling a couple of James Brown tunes, “Papa’s Got a Brand New Bag” and “I Feel Good.” For all his popularity, Brown served a niche market, and his style was more substance than content. When they get into songs by earlier rockers like Chuck Berry (“Johnny B. Goode”) and Jerry Lee Lewis (“Great Balls of Fire”), they really start to groove. It also gives Wilkinson a chance to bang out some Jerry Lee licks on the keyboard.

A hint of sadness pervades when the boys sing, “Unforgettable,” so close after the death of Natalie Cole.

As the show expands, the performers get funky. They join voices for Rick Nelson’s “Travelin’ Man,” and all five together grab a surfboard to sing the Beach Boys’ “Surfin’ Surfari,” looking just like the Boys did on their first album cover.

They diversify even more, singing Johnny Cash’s “Ring of Fire” a cappella. Massarotto whimsicalizes Cash’s “A Boy Named Sue” and “Midnight Train to Georgia” gets gender-bent when Godfrey amuses the audience by coming onto the stage dressed in gold as Gladys Knight.

The quintet gives some artists double duty: “Jailhouse Rock” and “Return to Sender” by Elvis, “Come Fly With Me” and “Fly Me to the Moon” by Sinatra and “Up on the Roof” and “Under the Boardwalk” from the Drifters. The Everly Brothers get a hat trick: “Dream,” “Wake Up, Little Susie” and “Bye, Bye, Love.”

Even relative newcomers get a nod in the Latin set, which features Ricky Martin’s “Livin’ La Vida Loca” and Marc Anthony’s “You Sang to Me.”

Music: The very last concert Franz Joseph Haydn attended in his life was in March 1808, about a year … END_OF_DOCUMENT_TOKEN_TO_BE_REPLACED

Film: Major League Baseball culminates each season with the World Series, but to find the true … END_OF_DOCUMENT_TOKEN_TO_BE_REPLACED