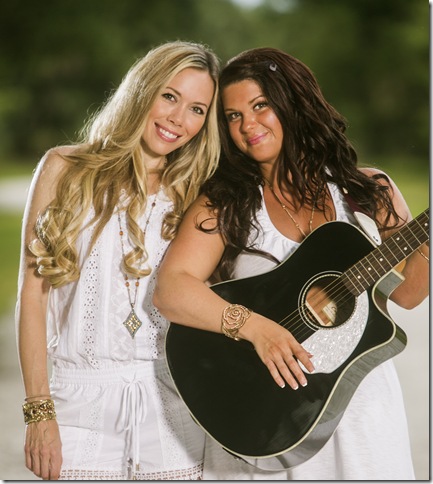 Modern country music has increasingly featured elements of pop, yet it’s still ironic that one of Palm Beach County’s rising authentic country groups came out of an act influenced by the Disney World, bubble gum sect of that genre. Yes, before sisters Alisa and Laura Whitacre formed White Acres (www.whiteacresmusic.com) in 2012, they were in full Britney Spears mode with another family act, Sorelle.

“That was with our other sister Lindsey,” says Alisa, “who’s since decided she wanted to focus on her family and two little girls. We wore headset microphones and did full-on dance routines like the popular artists of the late 1990s and early 2000s. But we were all actually raised on gospel music, and grew up listening to and loving country as well.”

Guitarist/vocalist Cooper Getschal added multiple instrumental tracks and performs live with the band, as does guitarist/dobro player John Smotherman, who’s also on the recording. Since last April, the on stage beat has been kept by Chuck Ficker, who uses a Peruvian cajon to approximate an entire percussion rig.

The sisters have come a long way since starting out as a purely vocal duo with backing tracks. Like their mother Janice, who manages the band, Alisa plays a keyboard to compose music. And like their father Don, Laura also plays guitar, a new wrinkle that may iron itself out on stage to add to the quintet’s already-impressive musicality and creativity.

“I’m taking guitar lessons with Bob Bunin at Chafin Music Center in Lake Worth,” Laura says. “It’s exciting to think about not just singing, but also eventually playing with the awesome musicians in this band.”

The new Bonnaroo, or one-and-done? The first Okeechobee Music & Arts Festival (www.okeechobeefest.com) features both old-school (Hall & Oates, Robert Plant, Preservation Hall Jazz Band, Walter “Wolfman” Washington) and newer artists (Mumford & Sons, Miguel, Avett Brothers, Skrillex) from March 4-6. If it succeeds and becomes an annual occasion, it will likely be due to its around-the-clock music on five stages, organized by veterans like Paul Peck of Bonnaroo fame.

If it doesn’t, the reasons may include poor timing because of competition from the not-dissimilar Aura Music Festival at the Spirit of the Suwannee Music Park in Live Oak on March 3-5, and the possibility that this event is partially geared toward promoting Sunshine Grove, the real estate development where the festival takes place at 12517 N.E. 91st Ave., Okeechobee ($259.50 + up, 863-357-1110).

Boston’s on the Beach (www.bostonsonthebeach.com) continuously features one of the area’s top monthly calendars, with no cover charges, and March is no exception. Saturdays feature 2 p.m. matinee performances by area singing violinist Amber Leigh on March 5 and 19, plus spot-on Beatles cover act Across the Universe at 8:30 p.m. on March 12; Sundays Grateful Dead tribute band Crazy Fingers at 7:30 p.m., and Mondays revolving reggae groups (including The Resolvers on March 14) at 9 p.m., all at 40 S. Ocean Blvd., Delray Beach (561-278-3364).

Put another large feather in the accomplished cap of A.J. Brockman, partner and curator at the intimate Brewhouse Gallery in Lake Park. He orchestrated a hugely successful Indiegogo online fundraising campaign that helped his new, larger Kelsey Theater (www.thekelseytheater.com) — formerly the Kelsey Club and more recently the Mos’ Art Theatre — to be renovated and reopened next-door in only a matter of months. See roots music groups the Nouveaux Honkies and the String Assassins at 8 p.m. on March 11, improv troupe the Jove Comedy Experience at 8 p.m. on March 18, and country acts Josh Gracin and the Gravel Kings at 8 p.m. on March 25, all at 700 Park Ave., Lake Park ($15-$20, 561-328-7481).

Film: Playwright August Wilson began his chronicle of the African-American experience throughout the … END_OF_DOCUMENT_TOKEN_TO_BE_REPLACED

Film: Just in time with the opening of movie theaters in Palm Beach County comes the season’s most … END_OF_DOCUMENT_TOKEN_TO_BE_REPLACED

Music: The very last concert Franz Joseph Haydn attended in his life was in March 1808, about a year … END_OF_DOCUMENT_TOKEN_TO_BE_REPLACED