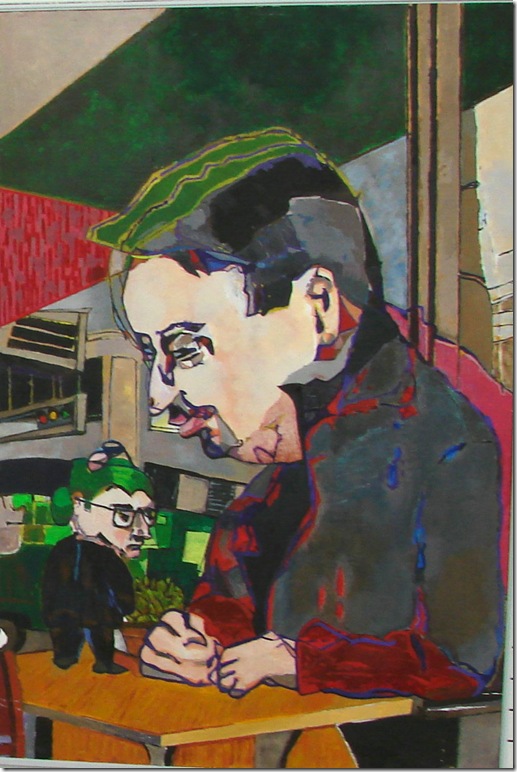 The contemporary art scene in Palm Beach County may not contain as much of the risqué or emergent as can be found in our flashy neighbor to the south, Miami Beach — and we really needn’t be jealous; after all, we have old money — but there is a steady undertow of the new pushing towards the surface, and slowly (and I do mean slowly) beating down the fine art-and-antique image and recasting Palm Beach as a stylish hub for new art.

We’ve seen it most recently with the success of the Art Palm Beach fair, and alternative art spaces, such as the Mordes’s Whitespace Gallery. Elsewhere, the market for contemporary art has escalated to the point of absurdity. So, you couldn’t really think Palm Beach art collectors would be left out of the fray. It’s just that things move rather slowly here under the royal palms.

Yet, whether or not there’s interest, there can’t be movement or energy in art without the presence of working artists and Saturday night’s opening reception for Contemporary Art Pop Up illustrated that there is a vital group of them here and that they’re doing work that merits attention. Unfortunately, gallery and exhibition space is still lacking. So, led by the efforts of Turkish-born artist Sibel Kocabasi, a group of 18 artists mounted a “pop-up” exhibit at an alternative space on PGA Boulevard in Palm Beach Gardens.

Kocabasi provided the impetus and the energy to transform a thrift store into a white cube gallery, though only temporarily through this coming Saturday. She also served as curator for the more than 50 works in this show, which include sculpture and mixed media, drawings, and paintings. Kocabasi herself is a painter, and one of her works stood out as a stunning example of the use of color and texture in an abstract composition to evoke a mood. 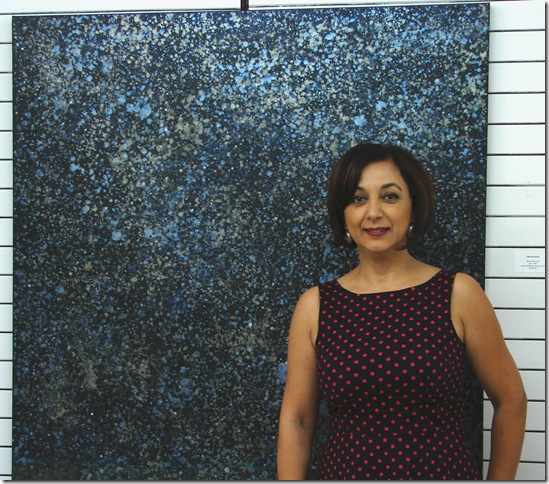 From a distance, Black Dot Com (2010) is a breathtaking work. However, another layer of interest becomes apparent when you move towards it and realize that the canvas contains thousands of tiny dots creating intriguing texture. Kocabasi remarked that she “painted each one by hand.” This makes the work not just visibly appealing, but adds a layer of complexity because of the artist’s process.

Two colorful paintings by Palm Beach born-and-raised artist, Sam Perry, stood out for their size, figuration and color. At first they seem somewhat caricature-ish with their bold, brightly colored figures. However, the subject matter for The Old Get Wiser (2011) is somber yet affirming.
Perry explained that he was inspired by the men in wheelchairs that he saw on Clematis Street in downtown West Palm Beach.

“Their nurses wheel them in. They don’t move around much anymore. They’re in that certain state, but I pay respect to them. If you look at the title — ‘The Old Get Wiser’ — he’s not moving around a lot, but that doesn’t mean he’s not still using some higher intellect in there,” Perry said. “I think that’s a positive thing.” 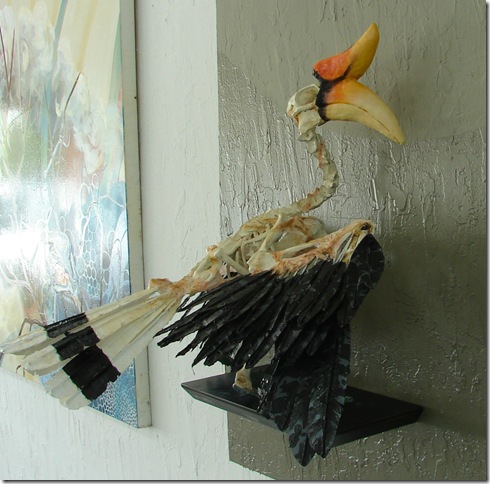 Local artist Ronn Jaffe, who didn’t have work in the show, commented on a work by Jacek Gancarz titled Postcard Greetings (2011).

“It’s like an old greeting postcard, but it’s wonderful to show this deconstructivist building and how dilapidated it is. It’s a tongue-in-cheek kind of thing and I really like it.”

This work, which appeared to be one large postcard, was actually composed of numerous 4-inch-by-6-inch prints pasted to the wall and assembled like a puzzle. Together, they depicted a photograph of a partially bulldozed strip mall and the words “Greetings from Lake Worth.” What made the work more interesting was that the individual postcard kept falling off the wall and onto the floor.

“I call it an interactive piece because the glue’s not holding and I’ve seen people coming and picking them up and putting them back on,” Jaffe said.

Artist and teacher Sarah Knudtson contributed some beautifully delicate works on paper that had an uplifting and ethereal quality. Her grayscale color choices bleed into one another in a manner that infuses a sense of solemnity, causing one to realize that they’re beautiful in a quiet manner, like a slowly, lightly dripping stream of water.

Dorotha Lemeh, an associate professor of visual art at Florida Atlantic University, who was on hand for Saturday night’s opening reception, was drawn to Rhinoceros Horn-Bill (2010), a work by Ryan Toth that was comprised of a small sculpture of a bird jutting out of the painted wall.

“There’s an odd sense of humor going on here with the wings falling off of a skeleton bird that’s flying off into the unknown. It’s almost a comment on what’s happening with the situation with the oil spill in the Gulf of Mexico,” Lemeh said. “With that kind of decay and us not taking care of our environment, it’s almost a wake up call.” 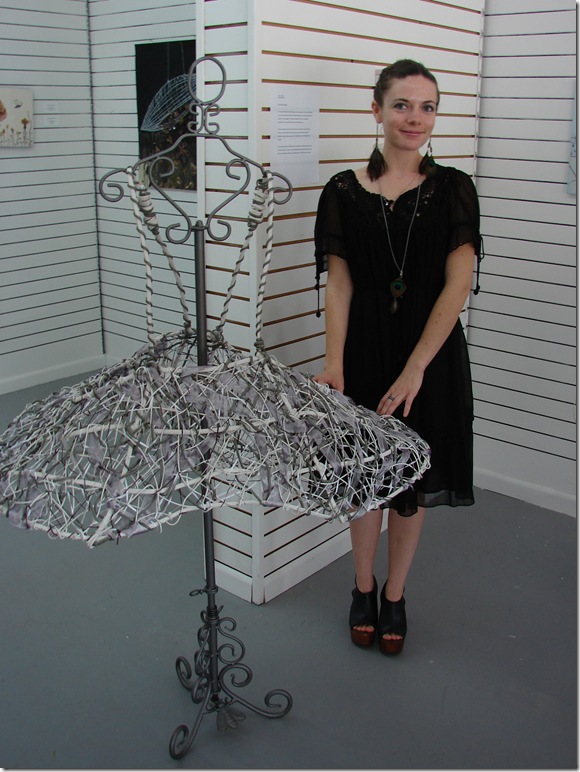 Jackie Tufford’s whimsical series, She Wore Wire Dresses (2011), stood out for both its beauty and pro-feminist stance. She creates intricate petticoat-type sculptures, which she wears when doing her performance work, which she didn’t do for the opening. When you look closely at these assemblages, you realize that they’re actually made from both ribbon and telephone wire, a melding of technology and femininity.

In her artist’s statement, she combines her wire sculptures and mixed-media canvases “to question what it means to be a girl, a woman or a lady…” engaged in various activities. She also points out that, though the assemblages appear quite delicate, they’re actually quite heavy and cumbersome when she dons them during her performance work.

Overall, the exhibit was a refreshing display of creativity and out-of-the-box thinking that encouraged contemplation and inquiry.

“The work that I’ve seen is very vivid, alive, and innovative,” Lemeh said. “There are some pieces here that really take chances.”

Palm Beach Pop Up is on view only until next Saturday, July 2, at the temporary Déjà New Gallery, which is located at 2602 PGA Blvd, Palm Beach Gardens, in a plaza on the southwest corner of Prosperity Farms and PGA Boulevard. Viewing hours are Monday through Saturday from 11 a.m. until 5 p.m. For more information, please contact Sibel Kocabasi at 561-667-3187.

Jenifer Mangione Vogt is a marketing communications professional. She’s been enamored with painting for most of her life. She studied art history and received her B.A. from Purchase College. Visit her art blog at www.fineartnotebook.com

Film: Playwright August Wilson began his chronicle of the African-American experience throughout the … END_OF_DOCUMENT_TOKEN_TO_BE_REPLACED

Film: Just in time with the opening of movie theaters in Palm Beach County comes the season’s most … END_OF_DOCUMENT_TOKEN_TO_BE_REPLACED

Music: The very last concert Franz Joseph Haydn attended in his life was in March 1808, about a year … END_OF_DOCUMENT_TOKEN_TO_BE_REPLACED